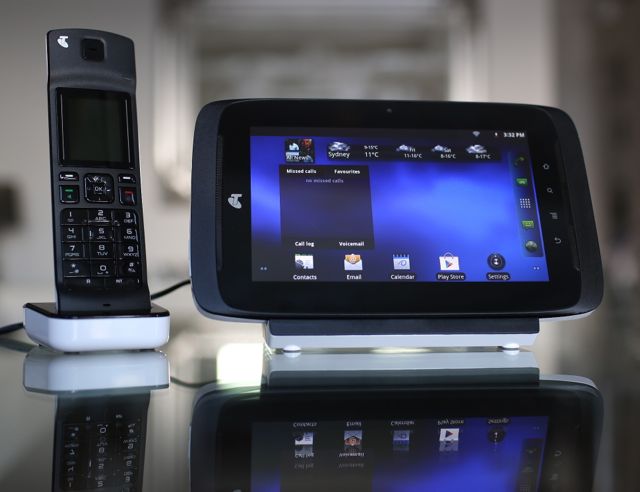 Telstra has launched the T-Hub 2 – the latest version of the popular home phone/tablet combination which features several improvements and an all-new design.

The T-Hub 2 is like a smartphone for the home and allows households to make handsfree calls from the tablet or the included cordless handset.

The device demonstrates there is still a demand for a home phone line with more than 30m landline calls being made in Australia per month.

The tablet portion of the T-Hub 2 has a 7-inch touchscreen with a resolution of 1024 x 600 and is running the Android 2.3 operating system.

With Android on board, customers can download their favourite apps to the T-Hub 2 from the Google Play Store.

The device also makes it possible to organise your family calendar as well as accessing handy information like the weather and the Yellow and White pages.

T-Hub 2 is not just for making and receiving calls, it can also be used to entertain with access to YouTube or the TuneIn Radio app to listen to your favourite radio stations from around the world.

And being a connected device the T-Hub 2 can also be used to access and view content from other DLNA (digital living network alliances) devices on your wireless network including smartphones, tablets and laptops.

The tablet portion of the T-Hub 2 sits in a stylish speaker dock which allows the device to be used hands-free with calls heard loud and clear even from across the room.

It also has a front (1.2-megapixel) and rear (1.9-megapixel) camera along with wi-fi and Bluetooth connectivity.

Up to five compatible devices can be connected to the T-Hub 2 including additional 7-inch Telstra tablets or handsets.

“T-Hub gives Telstra customers unique fixed line features including hands-free calling from a tablet and voicemails displayed as a list so owners can see who called and jump to the messages they want to hear most.”

Ironically the Telstra T-Hub 2 has been released almost 100 years to the day since the introduction of Australia’s first automated telephone exchange which meant phone users no longer needed to speak to an operator to connect their calls.

The T-Hub 2 is available from Telstra stores today either for outright purchase at a cost of $360 or for $15 a month as part of a Telstra T-Bundle over 24 months.

To use the T-Hub 2 customers need a Telstra broadband connection and a Telstra full service home phone.

Tune into episode five of the top-rating Tech Guide podcast