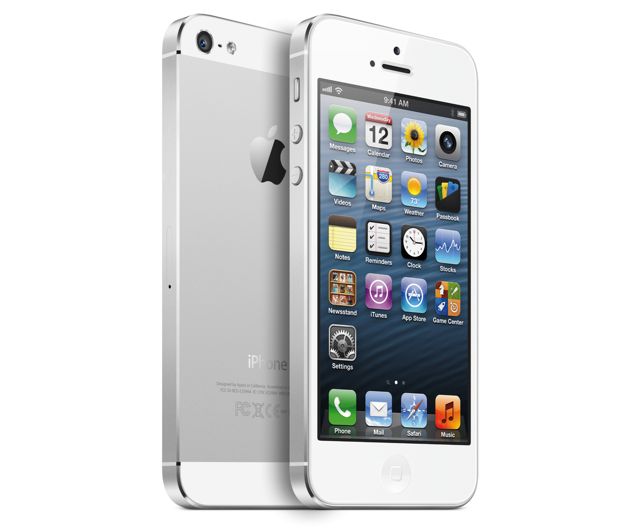 The iPhone 5 has been an eagerly awaited device and the good news is that it lives up to the hype with an excellent combination of design and features.

The new iPhone manages to pack in a larger 4-inch Retina Display but is still remarkably thinner and lighter than the previous device.

Throw in a noticeably faster processor, a long list of new features from the new iOS 6 operating system, 700,000 apps at your fingertips and compatibility with Australia’s 4G networks and iPhone 5 is the smartphone to beat.

How thin can it get? At 7.6mm, the iPhone 5 is 1.7mm thinner than iPhone 4S which might not sound like much but, when you get it in your hand, it feels like a lot.

It’s also lighter – 112g down from 140g – and feels like a featherweight in your hands.

But despite these svelte proportions, the iPhone 5 still has a distinct feel of quality with precision engineering and thoughtful design.

The rear panel of the iPhone 5 now has a large section of anodised aluminium that lines up with the top and bottom of the screen with glass inlays top and bottom.

Speaking of the screen, the iPhone 5 has a larger 4-inch screen that is the same width but taller that the iPhone 4S display.

Apple’s reasoning behind this is that it still wanted customers to easily navigate the device’s many features and apps comfortably with one hand.

This decision still makes the other smartphones on the market with 4.8 and 5.3-inch screens dwarf the iPhone 5.

We would have liked to see a larger screen with slightly more width to give web pages, apps, images and videos even more breathing room.

The added height certainly enhances movie and picture viewing but the narrow screen made viewing web pages a little difficult.

Sure we could see more of the page length wise but even turning the device on the side for a landscape view was like looking at a web page through a letterbox slot and we spent as much time scrolling as we did reading.

Apps originally built for the previous 3.5-inch screen are not stretched but bookshelved by bars top and bottom or left and right depending on the way you’re holding the iPhone 5.

Users can expect a load of updates when apps are adjusted by the developers to fit the new 4-inch screen.

But having that extra screen space comes in handy – there’s an added row of apps on each screen, you can see more of a web page at a glance and more emails at once.

Even the notifications that roll in at the top of the screen are even less disruptive to what ever you’re doing.

But Apple missed one chance to take advantage of the longer screen.

We would have liked to see an extra row of keys on the virtual keyboard – perhaps a row of number keys – that would save users having to switch to a second keyboard when they want to type numbers.

But the Retina Display screen still looks as sharp as ever and makes web sites, pictures, movies and apps look amazing.

The iPhone 5 has noticeably more grunt thanks to the new A6 processor onboard.

The added zing – it’s up to twice as fast as the iPhone 4S processor – can be plainly seen when opening email attachments, web pages and apps but also comes into play nicely when using the new Mapping app and playing videos and games smoothly.

Another reason to love the new processor is that it’s even more power-efficient as well to make the battery last even longer.

To many users, including this one, this is a favourite feature of the iPhone 5 – its compatibility with the Australian 4G networks through Telstra and Optus.

The speed of 4G is a delightful addition to the excellent hardware and impressive software.

We did a speed test in the middle of the Sydney CBD and achieved 28.58 Mbps download and 25.38 Mbps upload. Now that’s fast!

Just as you’d expect a sleek Ferrari to have a powerful engine, the iPhone 5 has the speed to match the beauty.

Wi-fi and 3G connectivity are also faster with the iPhone 5 so speed should be its middle name.

The iPhone 5 has the same 8 megapixel resolution of the previous iPhone but it now comes with the added Panorama feature which allows users to capture sweeping vistas.

Users are given directions to sweep the camera left to right and capture an ultra wide image that’s actually up to 28 megapixels in resolution.

With the video recording on the iPhone 5 – it’s still full high definition but now users can take still images while shooting their movie.

Even the front-facing FaceTime camera is now HD and is capable of recording 720p video.

The new iOS 6 operating system comes pre-loaded on the iPhone 5 and this brings with it a number of enhancements – new phone features, improved mail, Siri with more abilities like opening apps and finding scores and movies, FaceTime calls over 3G/4G and Facebook integration.

And having the added speed of the A6 processor and the larger screen makes these features even more powerful.

With iOS 6 the Google maps are gone and in its place is Apple’s very own mapping solution.

As is typical with any Apple-made app it is elegant and beautiful with neat animations and features.

Our favourite the 3D view which allowed for the new Flyover feature which – as its name suggests – is like flying over the city skyline.

Two finger gestures can adjust the angle of view and also twist the whole view around to a completely new angle.

A good showcase of this feature is a flyover of downtown San Francisco and Sydney Harbour.

There’s also turn-by-turn navigation so the iPhone 5 can be your GPS device as well.

The iPhone 5 still offers quite respectable battery lift that we found as good as the iPhone 4S if not slightly better so it easily powered us through an entire day even when accessing wi-fi and 4G connections.

This extended battery life is helped along by the power-efficiency of the new A6 processor.

One of the controversial changes on the iPhone 5 is the new smaller Lightning dock connector which replaces the nine-year old traditional 30-pin dock connector.

Lightning is 80 per cent smaller than the 30-pin connector and won’t fit the thousands of speaker docks and accessories on the market.

Apple will be selling a Lightning to 30-pin adaptor plug for $34.95 to allow the iPhone 5 to still connect with these third party products.

With music speakers moving to wireless streaming over Bluetooth and wi-fi this isn’t going to be a deal breaker for users but it’s good to know Apple has an adaptor available if you need it.

The other thing that’s shrunk on the iPhone 5 is the SIM card.

The microsim on the previous iPhone has been made even smaller to a Nanosim which is basically the size and width of the metallic contact points on a regular sim card.

Users who are upgrading can easily get their Nanosim from their respective carrier’s store for free and have their account transferred on the spot or later over the phone.

The iPhone 5 is the first smartphone to use the Nanosim.

The iPhone 5 certainly ticks all the boxes in terms of design, features and speed and has certainly set a new benchmark for competitors to meet.