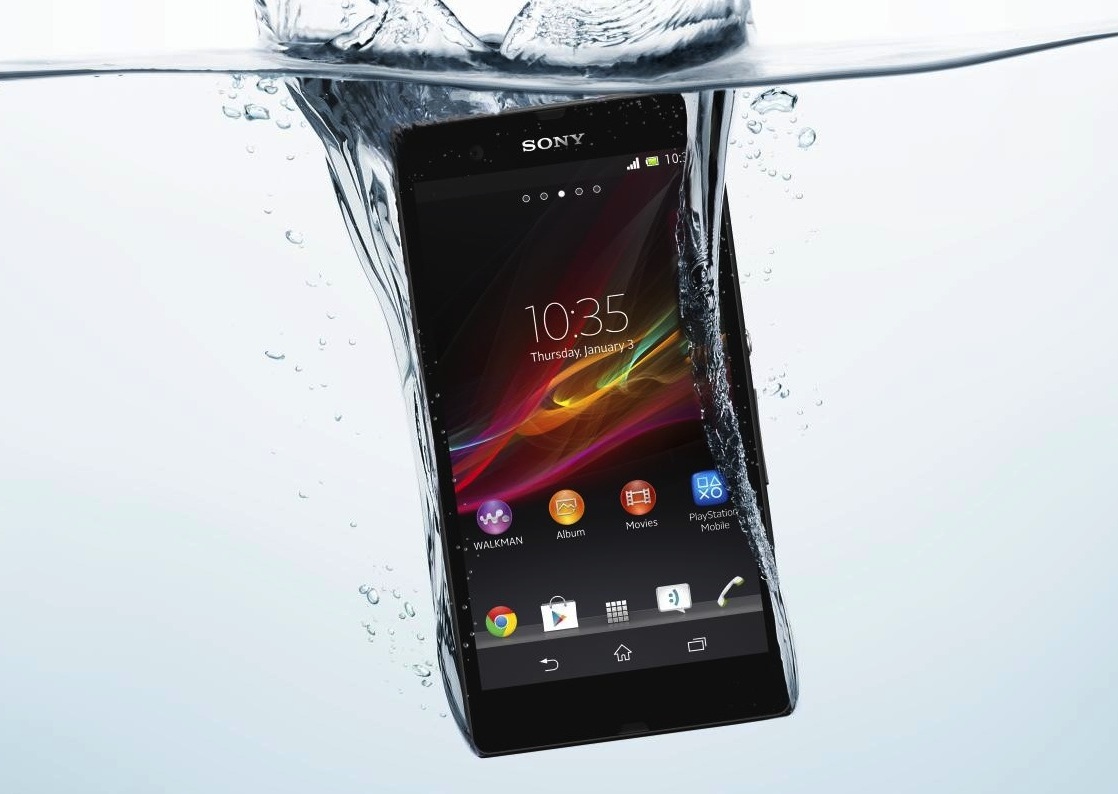 Sony has really got its act together with its latest smartphone – the Xperia Z – which would have to rank as the best to ever sport the Sony brand.

The feature-packed device looks like it was thoughtfully put together after calling on the various parts of the company to contribute their best technology – display, camera, audio, computing power and content.

And to top it all off, the sleekly designed device also happens to be waterproof.

And we don’t mean it can handle a few raindrops – the Xperia Z can sit in a bucket of water and still work perfectly well.

You can feel the quality of the Sony Xperia Z as soon as you pick it up. It has a solid feel, sharply defined edges and a glossy finish.

It has a stunning 5-inch 1920 x 1080 full definition display and a clean look because all of the ports are hidden behind tiny doors.

Along the top is 3.5mm headphone jack while down the left side is the microUSB port and the microSD card slot. Down the right side is the hidden SIM card slot the on/off/sleep button and the volume rocker control.

On the back is the 13-megapixel camera and flash along with the NFC (near field communication) point which is symbolised with an “N” symbol. There is also a 2-megapixel front facing camera.

Despite have a relatively large 5-inch screen, the Xperia Z doesn’t overwhelm you with its size. It fits comfortably in your hand and is surprisingly thin.

It’s hard to miss the gorgeous Sony Xperia Z full high definition display from the moment you see the device come to life.

It has 1920 x 1080 resolution with a mobile version of the Bravia Engine 2 which was perfected in Sony’s vast line-up of TVs.

On the Xperia Z the Mobile Bravia Engine 2 enhances contrast and colour.

The display has 443ppi (pixels per inch) and the result is a pin sharp screen that makes apps, pictures, videos and web pages look excellent.

Sony has removed an air layer from its OptiContrast Direct Touch screen which means there is less reflection and increased responsiveness.

One of the highlights of the Xperia Z is the onboard 13-megapixel camera which includes HDR (high dynamic range) which means it can capture pictures and videos in any light including a strong backlight.

We were impressed by the Xperia Z’s Superior Auto mode which took the thinking out of taking our photos.

The devices has Scene Recognition to automatically choose the proper settings for the picture you’re taking.

Also included with the Xperia Z is the mobile version of the Exmor RS sensor which is used in Sony’s range of cameras.

When all of those features combine, the resulting images are high quality with natural colour and sharpness.

But when you fire up the camera for the first time – it takes a few seconds to open. It was so slow we thought we didn’t hit the screen icon properly.

When we went in for another try, the camera decided to open. Not ideal if you want to capture something in a hurry.

Connectivity is a large part of the picture with the Xperia Z including NFC (near field communication).

NFC can be used in a number of ways including one-touch sharing of photos and music to and from other compatible devices.

Pairing the Xperia Z to other NFC devices is just a matter of touching the device to an NFC-enabled product like wireless headphones and speakers.

Included with our review kit for the Xperia Z was a pair of wireless stereo headphones which can be connected simply by touching the NFC symbols on the devices together.

With Sony’s upcoming 2013 range of smart TVs, you can count on NFC compatibility to easily mirror the Xperia Z’s display and share other content to the TV’s screen.

One feature that will provide an entertaining party trick is the fact the Xperia Z is waterproof. The device can be fully submerged underwater to a depth of up to a metre.

Try doing that with any other device. If you did, you’d be shopping for a new smartphone. Wetting your mobile device is a surprisingly common occurrence so this feature along should make the Xperia Z attractive to many users.

And apart from handling water, the Xperia Z can also be used with wet fingers and a wet screen thanks to the responsive screen.

You could literally send text messages while you’re in the shower if you wanted to.

It’s OK to have all of these features but you also need a decent processor to power it.

The Sony Xperia Z has a quad care Snapdragon S4 Pro processor running at 1.5Ghz along with 2GB of RAM which provides solid computing power to make the device fast and responsive.

Also under the hood is a graphic processing unit to it makes viewing images, videos, playing games and browsing the web even smoother.

The Xperia Z is a 4G/LTE device which means it will work on both the Telstra and Optus networks.

When you call other HD Voice compatible devices on the Telstra network you’ll really notice the improvement in quality like the person you’re talking to is in same room.

On the music side Sony has called on its audio heritage to provide impressive sound through the headphones with technology like Clear Audio+ and Dynamic Normalizer.

Hearing music through the device’s speakers sounded a little tinny but still loud enough to enjoy in a relatively quiet room.

The battery was on par with other smartphones on the market and got us through a full day.

Battery saving feature Stamina mode turns off functions we don’t need and only allows calls and texts to come through.

But it only offered an extra couple of hours of battery life which, in the end, wasn’t really better or worse than its competitors.

We did feel the handset got hot at times and that usually means it’s burning battery power faster than normal. Nothing too alarming but it was noticeably warmer than usual somtimes.

Having glass front and back, the Xperia Z is also a fingerprint magnet and we found ourselves constantly wiping the screen and back panel several times throughout the day.

The Xperia Z is easily the best smartphone Sony has ever produced.

The company has finally got it right with excellent design and a smart feature set to achieve a quality that previous Sony models struggled to achieve.

Sony’s Xperia Z hardly puts a foot wrong and the minor faults we found don’t take away from the overall experience.

And the fact the device is also waterproof doesn’t hurt either.