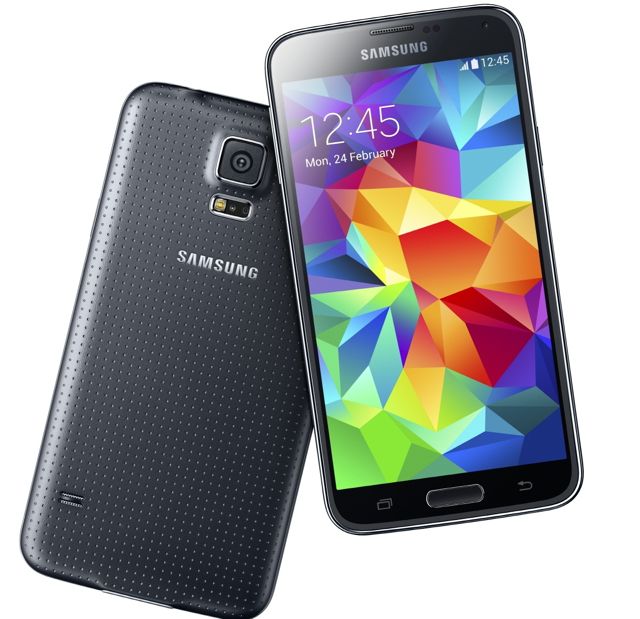 Samsung’s Galaxy S5 smartphone is a significant new device that has raised the bar with an updated design and a range of key new features.

Samsung has taken a measured approach with the S5 and delivered a refined product that has made improvements in the right places.

It was always going to be a challenge to improve on the excellent Galaxy S4 and the good news is the S5 has done it.

On the design side, the Samsung Galaxy S5 has more in common with the Galaxy Note 3 than the Galaxy S4.

The silver ridged edging is similar to that of the Note 3 and it has squarer corners than the S4 but shares the DNA of both.

The front of the device is dominated by the 5.1-inch display with the home key the only physical button.

On the left is the volume up and down rocker switch while the on/off/sync button is on the right like it is with other Samsung Galaxy devices.

On the top edge is the headphone jack while the bottom edge features the microUSB sync/charge port that’s sealed behind a watertight flap.

One of the only complaints about the Galaxy S4 was the “plasticy” feel of the device especially the removable thin back panel.

The back panel of the S5 can also be removed but instead of plastic it feels more like leather to the touch and covered in small dimples to promote a better grip on the product.

There are a number of new features including Android’s 4.4.2 Kit Kat operating system, 16-megapixel camera, fingerprint sensor, heart rate monitor and the device is waterproof and dustproof.

The 5.1-inch Super AMOLED display is dazzling and bursting with colour – it’s something you’ll never tire of looking at.

Samsung has taken a less is more approach with the UI (user interface) and most of Android’s own Kit Kat operating system shines through.

The fonts and icons have taken on a flatter and more subtle look and overall offers a clean and uncluttered experience for users.

When the Galaxy S4 was released much of the emphasis was on the gimmicky features like smart eye scrolling and motion gestures.

They are still there but users need to dig down into the menu to activate them.

What is a rather useful feature is the new fingerprint scanner under the home button. Users can scan up to three fingers (the iPhone 5S allows five).

Despite taking a leaf out of Apple iPhone 5S book here, the fingerprint scanner is placed under a much thinner home button.

To set up your fingerprint you have to continually run your finger down over the home button several times until it can complete the registration.

But once it was done it worked well whenever we needed to unlock the device.

Our only complaint was that we couldn’t unlock the phone with our fingerprint with one hand.

When we tried to swipe with our thumb holding the device in one hand the sensor wouldn’t allow us to come at an angle like the iPhone 5S does.

What it meant was we had to grab the S5 with our other hand to make sure we scanned in a straight line vertically down across the sensor.

The fingerprint reader can also come in handy to authorise payments with PayPal already on board.

There are is built-in health app aboard the Galaxy S5 called S Health and it can keep track of your steps, exercise and calorie intake. But the killer feature here is the heart rate monitor.

But how can a smartphone take a your heart rate? On the S5 users hold the device with the screen facing them and place their index finger over the flash below the camera.

Beside the flash inside the indentation on the back panel is a sensor that shines a bright red light into the tip of your finger to capture your blood flow information.

This was quite impressive and just builds on the information you can capture about yourself to improve your health and wellbeing.

And of course the device pairs with Samsung’s Gear Neo and Neo 2 smartwatches and the Gear Fit activity band.

What’s really impressive is the fact that the Galaxy S5 is completely waterproof and dustproof.

There are constant warnings to ensure the removable back cover is clipped on securely because if one clip isn’t properly inserted water will get in and your phone will be damaged or, worse still, completely dead.

We did our dunk test, after triple checking the back cover was sealed along with the seal over the microUSB ports on the bottom and it passed with flying colours.

But for our money the waterproof feature is a safeguard against accidental spills rather than being able to take it scuba diving.

The 16-megapixel camera on board the Galaxy S5 not only produces excellent quality images and videos it also gives you several shooting modes and editing options.

The camera has a lightning fast auto focus so you can capture the action as it’s happening.

There is also a handy HDR feature that allows you to adjust to a strong counter light like a very bright background and still produce quality shots.

For those who love a selfie, there’s a mode called Beauty Face that will smooth out your skin and give you an even complexion before you share it on Facebook.

The Galaxy S5 has a quad core 2.5Ghz processor so it’s blazingly fast. It’s good to know there’s that much power under the hood.

The product has 4G/LTE compatibility on the networks so it’s pretty snappy when you’re downloading data to use with apps or viewing web pages.

Also onboard is a download booster which lets you use LTE and wi-fi at the same time to speed up your download.

When you need a file quickly turn on this feature to get LTE and wi-fi to work together and get up to 90 per cent speed bump from the added network.

On the battery side this is where the Galaxy S5 has seen massive improvement.

During our initial testing we easily got through a day and half on the regular settings while using the device as we would everyday – making calls, using apps, taking pictures and browsing the web.

But an added feature of the battery this time out is the Ultra Power Saving Mode.

When activated this can extend the device’s standby time for days. For example, if you’re down to 55 per cent on the battery that is still enough juice to be on standby for more than 6 days in the Ultra Power Saving Mode.

It does this by minimizing the usable apps and turning the screen from bright colour to greyscale with a simplified on-screen menu that presents just the essential functionality like calls, messaging and your browser.

You can also add three features or apps to this simplified home screen.

In this mode, mobile data is turned off when the screen is turned off along with other battery-burning connectivity features like wi-fi and Bluetooth.

The Samsung Galaxy S5 is an excellent device with features relevant for everyone from smartphone beginners to power users which is why it will appeal to broad range of customers.

The device is well designed and powerful and is a pleasure to use.

Samsung has hit a home run with the Galaxy S5.