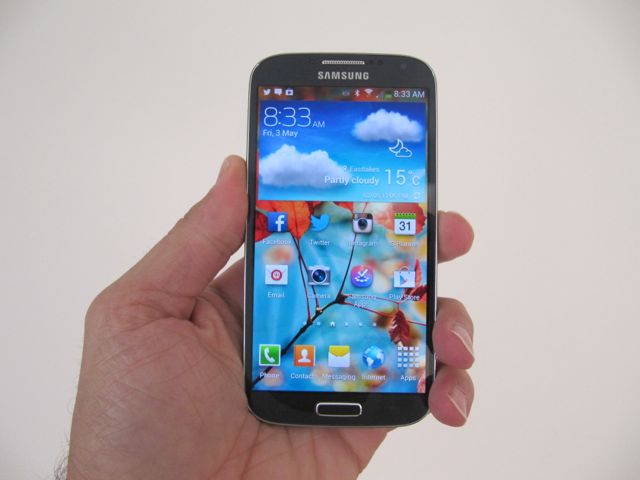 After the huge success of Samsung’s Galaxy S III it was obvious the Galaxy S4 was going to be an eagerly awaited follow-up and with good reason.

The latest Samsung smartphone runs Android 4.2.2 Jelly Bean and is a distinct improvement in terms of hardware, software and features.

For a start it has a bigger 5-inch screen with a scorching quad-core processor and an improved 13-megapixel camera.

It’s also quite thin at just 7.9mm and feels slightly less plastic – even though it still is plastic – than the Galaxy S III.

But the upside of being mainly plastic is that it keeps the device relatively light at just 130g.

On the top edge is the 3.5mm headphone jack, with the volume control down the left, the on/off/lock key on the right and a microUSB charge port on the bottom edge.

The front of the device has a home button as well as a soft menu button and back button while the back has the camera and flash.

What you won’t find is an ejectable SIM tray because, unlike nearly all of the recent Android devices, the Galaxy S4 has a removable back panel to access the battery.

And from here users can insert a SIM card and a microSD card to compliment the onboard 16GB capacity.

On paper these all look quite impressive and most will prove to be a bit of a novelty while some were just downright gimmicky.

Let’s start with Smart Scroll. The whole idea behind this is to let your eyes do the walking on the screen.

Last year’s Galaxy S III could already detect your eyes on the screen and keep the display from dimming while you’re reading.

The Galaxy S4 has taken that technology a step further by checking where your eye is on the screen and scrolling when your eyes reach the bottom.

The feature worked only some of the time and often scrolled what we were reading when we didn’t want it to which was annoying. Good news is you can turn it off if it doesn’t work for you.

Smart Pause is used when watching videos and works very well so that when you take your eyes off the screen the video is paused and then resumes when you’re looking at the screen again.

Air View lets you preview emails, documents and albums simply by hovering your finger above the display which is handy to find information without having to open up the app or a particular document.

This feature was seen with the Galaxy Note II and requires the included stylus to use Air View.

Air Gesture allows users to control their Galaxy S4 with gestures that are picked up through a sensor on the front of the device.

It allows simple things like scrolling emails and web pages by moving your hand up and down.

If you’re browsing through the pictures in your gallery you can also move your hand left to right to navigate your images as well.

You can also mute of pause the device by covering the screen with your hand while the media is playing and also capture a screen shot by moving the side of your hand across the screen.

The device picked up gestures quite accurately and was fun to do but it is just as easy to touch the screen so the novelty of this one might wear off pretty quickly.

We are, after all, just an inch from the screen so it’s not like it’s going save us a whole lot of trouble.

It’s a great feature to have on a smart TV – which Samsung does and makes the whole experience a little easier – but including it with the Galaxy S4 makes it a good party trick.

A standout feature of the Galaxy S4 is the 13-megapixel camera that has been enhanced not only in quality but with some added features.

The first is Dual Camera which allows you to shoot simultaneously from the front and rear camera so now you can never feel left out.

Drama Shot lets you take a picture of a moving subject and put them together like a sequence shot.

Sound and Shot allows users to record up to nine seconds of audio to go with their photograph.

S Translator is also a handy addition with the ability to say something in one language and hear the translation in English, Portuguese, Chinese, Spanish, German, Korean, Japanese and French.

This is a handy feature for travellers and is remarkably accurate. It can certainly help break the language barrier if you’re in a foreign country.

The spec sheet of the Galaxy S4 is quite impressive starting with its quad-core 1.9Ghz processor which makes the device hum along very nicely.

Interestingly there is actually an eight-core processor available in some markets but this is being reserved for the 3G version of the Galaxy S.

Here in Australia where the Galaxy S4 works on our 4G networks we’ve been given the quad-core version.

And that’s more than enough grunt. The device is very fast so accessing apps, opening pictures and documents is instant.

Speaking of speed the Galaxy S4 also supports the latest wi-fi standard 802.11ac which is up to three times faster than 802.11n if you’re using a 802.11ac router in your home.

This added wi-fi speed and capacity is a big help when it comes to sharing and accessing content on your home network.

Now the all important question about battery life. The Galaxy S4 easily powered through an entire day even with heavy use.

Our testing had the battery lasting for up to a day and half before we needed to reach for the charger.

Even when the device warned us to connect the charger when it got down below 15 per cent battery – we found that we still had a few hours before it completely faded out.

And, with a removable battery it’s possible to carry around a spare battery and pop it in if you’re a real power user who doesn’t want to be left in the dark.

The Samsung Galaxy S4 is one of the most desirable smartphones on the market and combines design, hardware, software and features into a compelling product.

It has certainly set a new standard for Android devices and will attract plenty of users.

The Two Blokes Talking Tech are back with episode 111