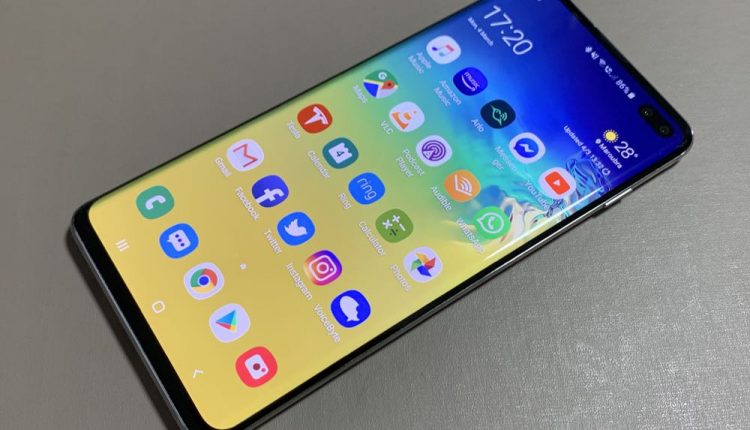 Samsung has produced easily its best Galaxy S device to date. It has come up with a device with superb build quality, with a stunning display, excellent camera and innovative new features. The Samsung Galaxy S10 is one of the best flagship phones money can buy.

If you do anything for 10 years you’re going to get really good at it. Case in point – the new Samsung Galaxy S10 – easily the best smartphone the electronics giant has produced.

Years ago, Samsung was trying to match the wildly popular iPhone but today with the Galaxy S10 – it has come up with the device that has set a new standard for build quality and innovative features in a smart-looking package.

There are improvements across the board – the screen, the camera, the AI and the design.

Put them all together and you get one of most accomplished products on the market today.

For our review we’ve been using the Samsung Galaxy S10+ which shares most of the same features as the S10.

The S10+ is instantly recognisable as a Samsung Galaxy smartphone.

It has the same shape and curved edges on the display but a slightly larger screen than the S9 at 6.4-inches. The S10 has a 6.1-inch display. 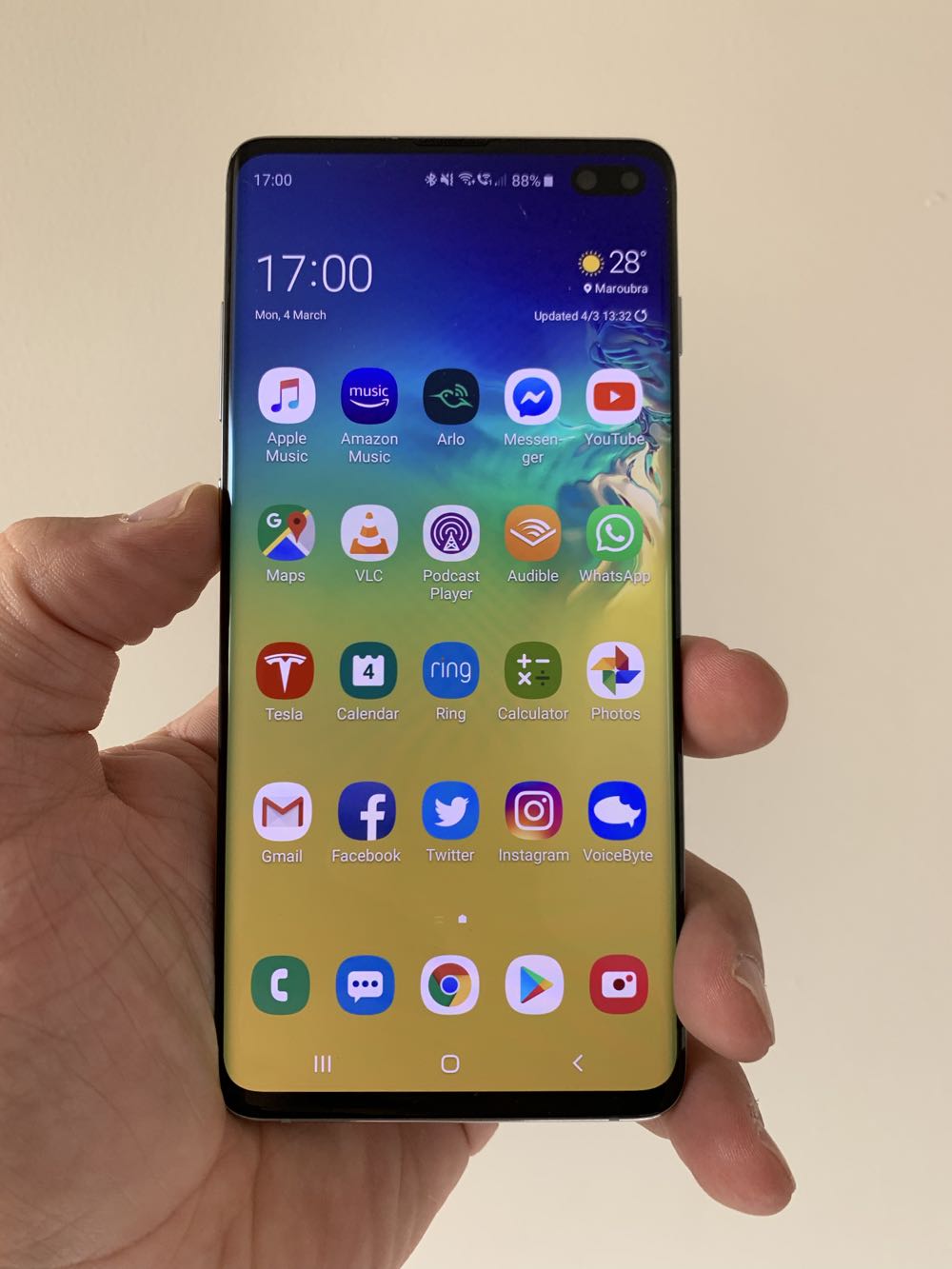 Despite having a larger screen, the S10+ doesn’t feel like a massive phone in your hands.

In fact, we managed to easily do most things on the device one-handed. 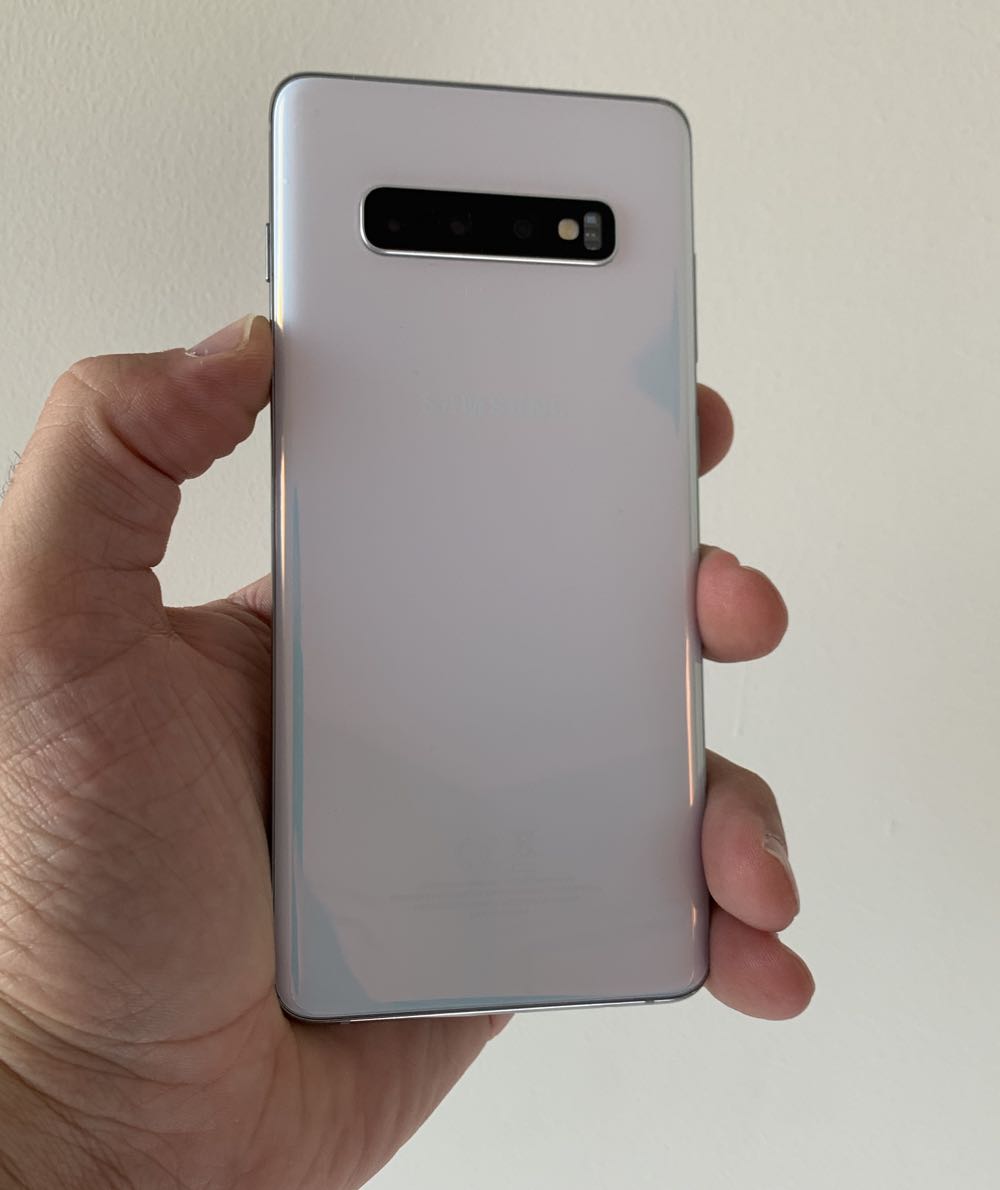 On the back of the S10 + there are now three cameras and two cameras peeking out from a hole in the screen.

There’s also no dedicated fingerprint reader that can be seen on the device – more about that later.

We’re also a fan of the new Prism White colour as well.

Once again Samsung has knocked it out of the park when it comes to the display.

It is bright, sharp and brilliant. 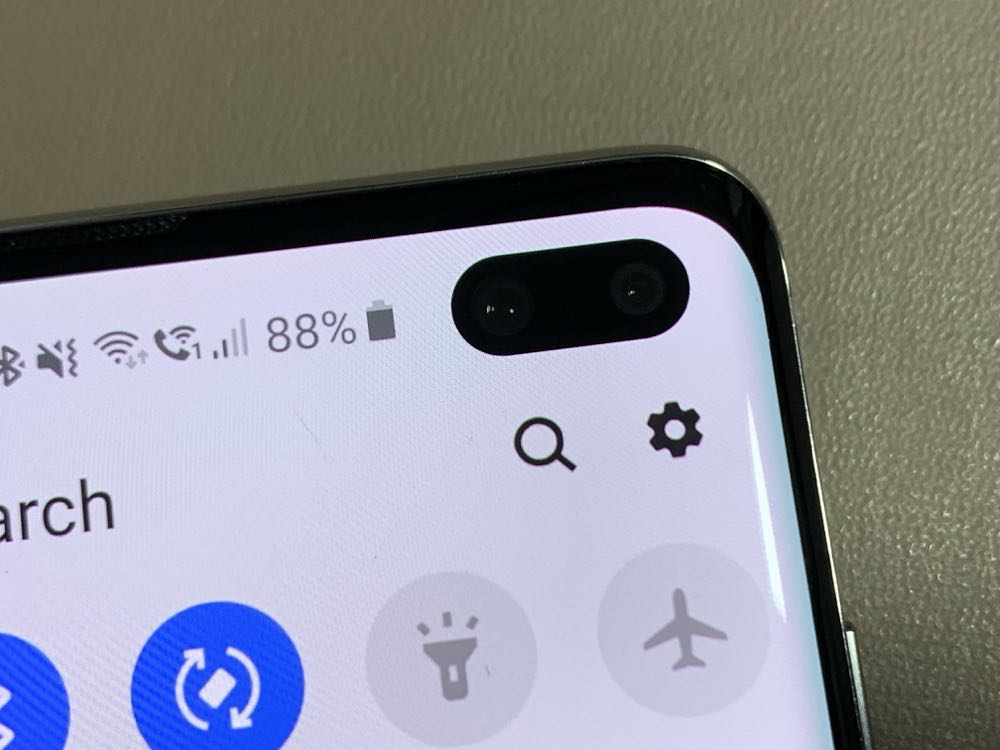 The Dynamic AMOLED is the industry’s first to boast a HDR10+ certification, greater colour accuracy as well as improved contrast and brightness.

Even in bright environments, the display still holds up nicely. 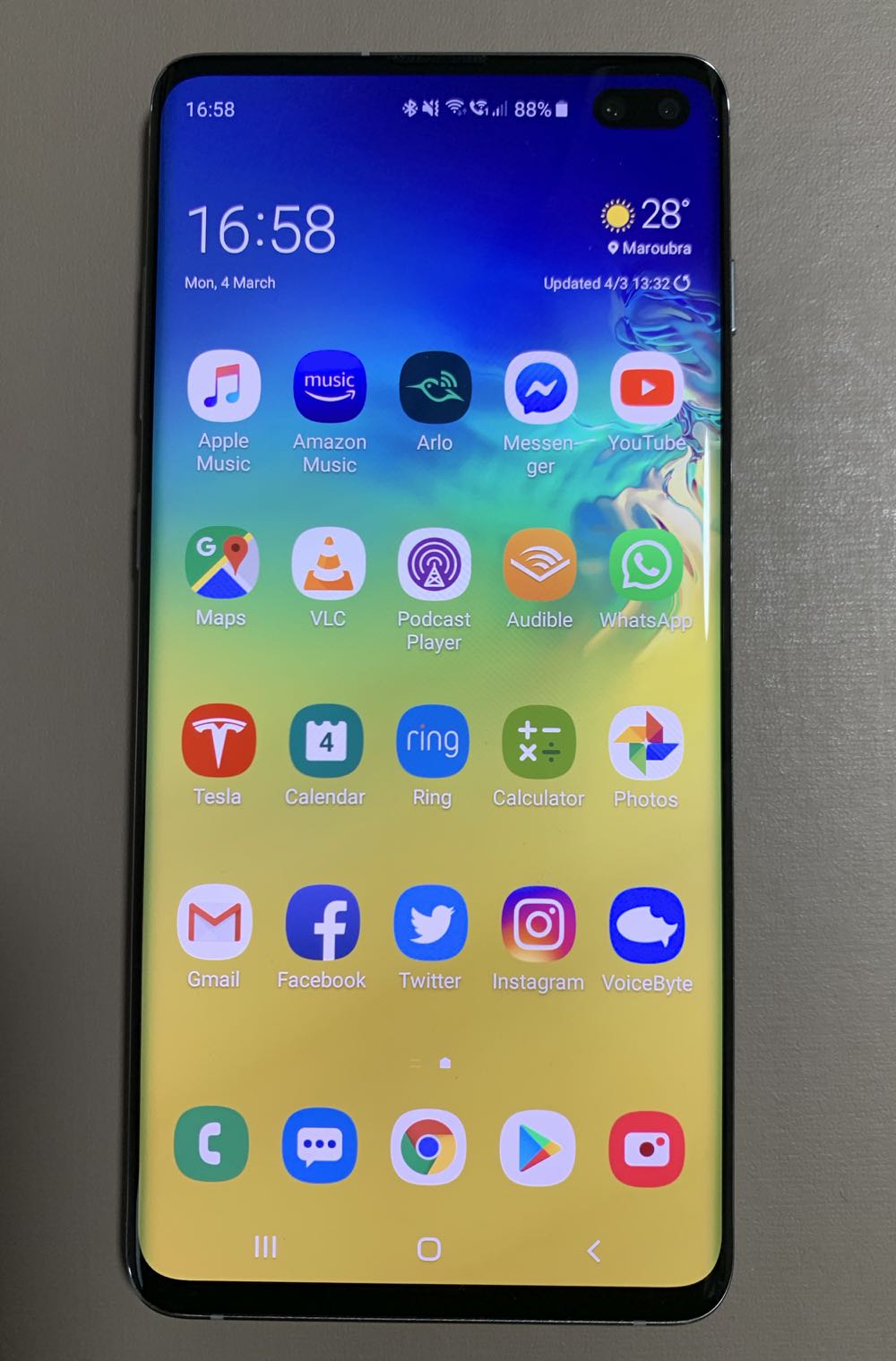 We also need to point out the new Infinity O display – the part of the screen which has been cut out with a laser to allow the two front-facing cameras.

This is in place of a notch – which we don’t mind one bit.

The camera hole in the top right corner is not too obtrusive. It blends in with the rest of the info in the top section of the screen like the battery percentage and signal strength.

What we liked was how Samsung has to tried to conceal it with its wallpapers which all have dark sections in the top right corners so the camera hole isn’t as obvious.

For the first time, Samsung has removed the physical fingerprint scanner from the rear panel and now placed the scanner inside the display.

The scanner, located near the bottom of the screen, actually examines the 3D contours of your fingerprint to make it even more accurate. 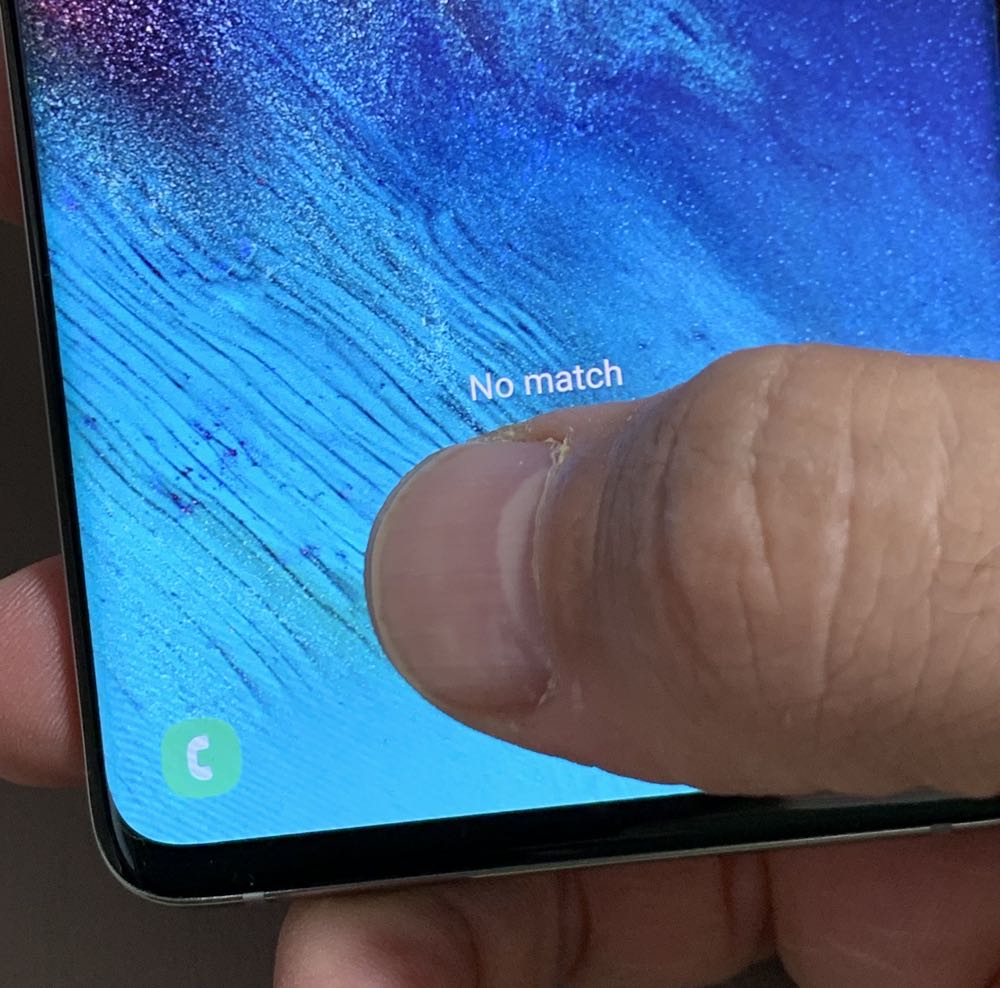 This was the only area we found any issue with the device.

For our review we registered our two index fingers and our two thumbs to be recognised by the fingerprint scanner.

On numerous occasions when we were holding the device in our hand and trying to reach our thumb down to the scanner it would often say “No Match”.

Trying to bend your thumb down to the scanner position while holding the S10+ one-handed meant it was looking at our fingerprint sideways. 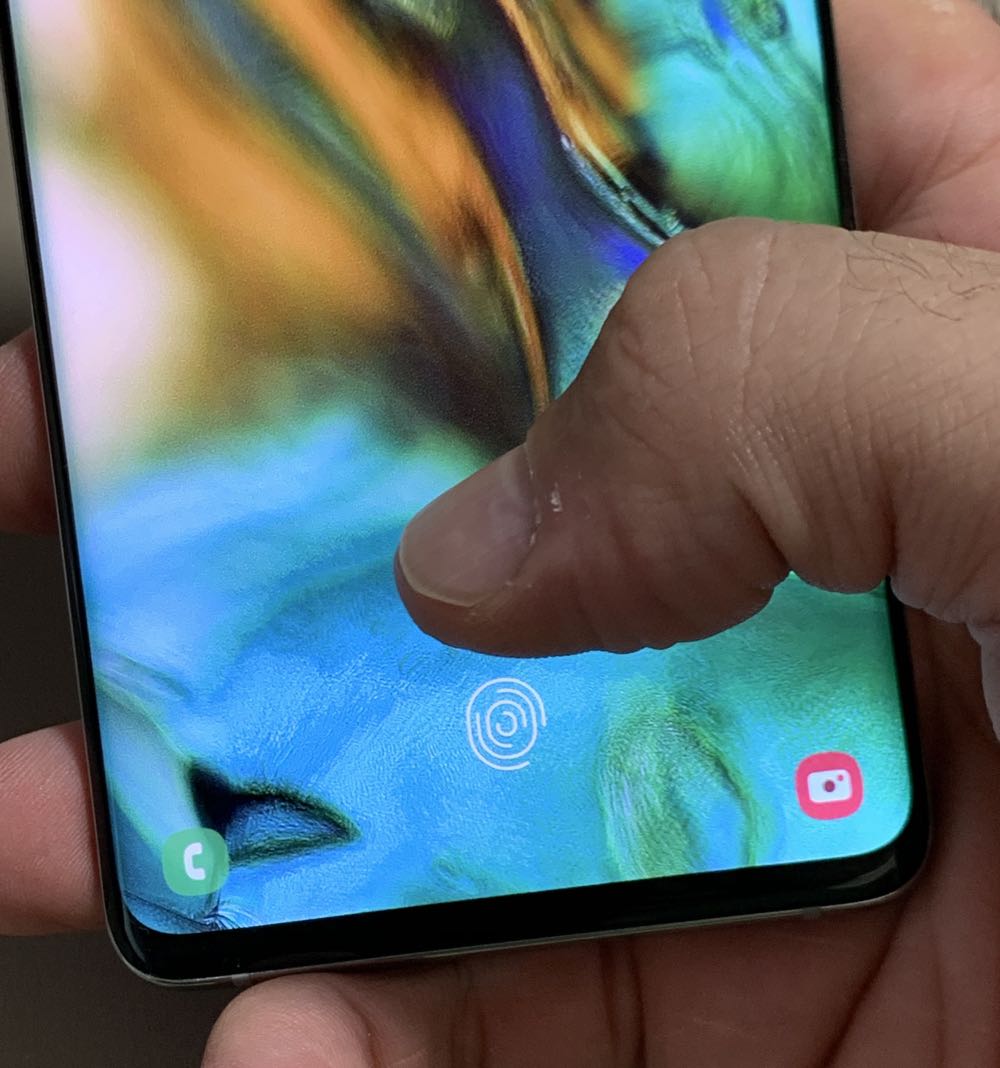 It wasn’t unusual to be pressing our thumb three times to unlock the device.

On some occasions we use all five attempts before being forced to either try again in 30 seconds or use our passcode.

If the fingerprint scanning area was up closer to the middle of the screen it would be far easier to position our thumb to unlock the device.

In its current position we often needed to grip the device with our left-hand and press our right thumb to the scanner to get it to work the first time.

When the screen is illuminated, a small fingerprint symbol appears indicating where you need to place your thumb or finger. 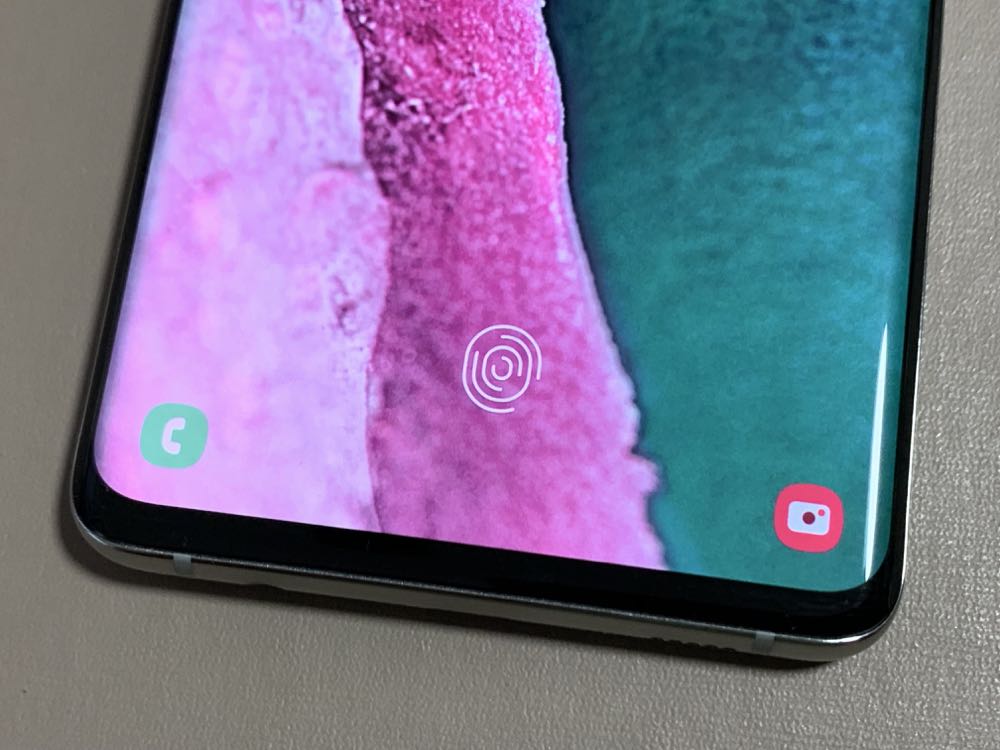 But when you pick up the device and the screen is dark you’re flying blind. You get to know roughly where it is but that’s just one extra step required if you get it wrong.

For our review unit, there was a software update meant to improve the in-screen fingerprint scanning but it made little difference to our issues.

And frankly, I didn’t want to rely on the facial recognition to unlock the S10+ because it isn’t any good. We’ve seen cases where a video of the owner’s face was enough to unlock the Samsung device. 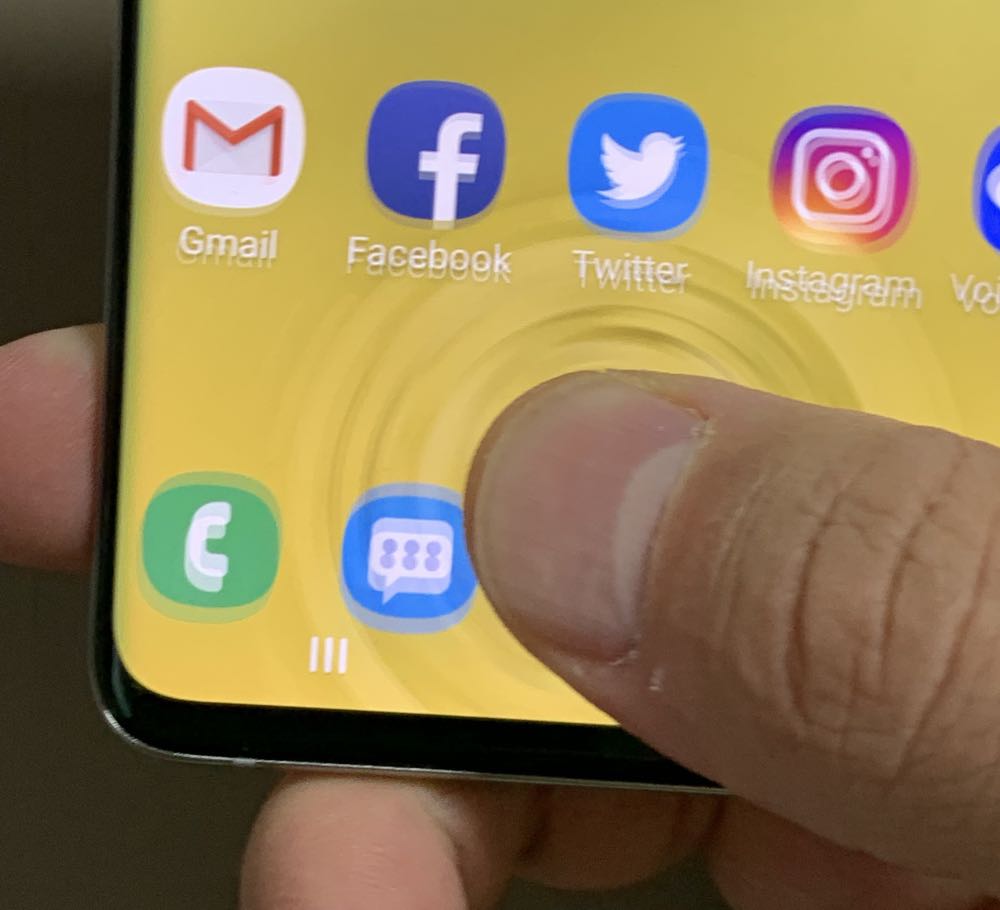 Samsung needs to improve not only the position of the fingerprint scanner on the screen but also its responsiveness and accuracy.

The Huawei Mate20 Pro in-screen fingerprint reader is positioned in an easier position but it too suffers the same accuracy and responsiveness issues.

This was never a problem for Samsung when there was a dedicated physical fingerprint reader on the device.

Your saviour with the S10 is the Smart Unlock which can keep the device unlocked when it’s connected to a Galaxy Watch or to your car.

One of the strengths of the Samsung Galaxy S10+ is the camera system which consists of three rear cameras and two front-facing cameras.

The three rear cameras include a 16-megapixel ultrawide lens with 123-degree field of view to match that of the human eye. 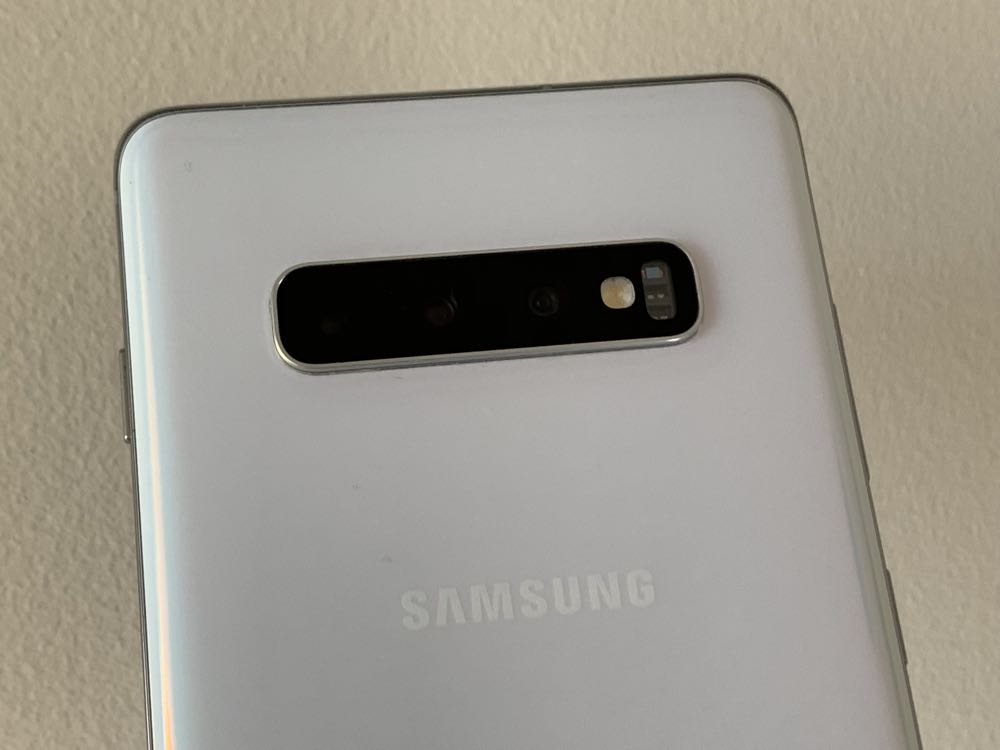 In the middle is a 12-megapixel wide dual aperture dual pixel lens with OIS (optical image stabilisation) alongside the 12-megapixel telephoto zoom lens which also has OIS.

It is easy to access these different lenses thanks to the shortcuts in the camera which allow users to toggle between the different framing each camera offers. 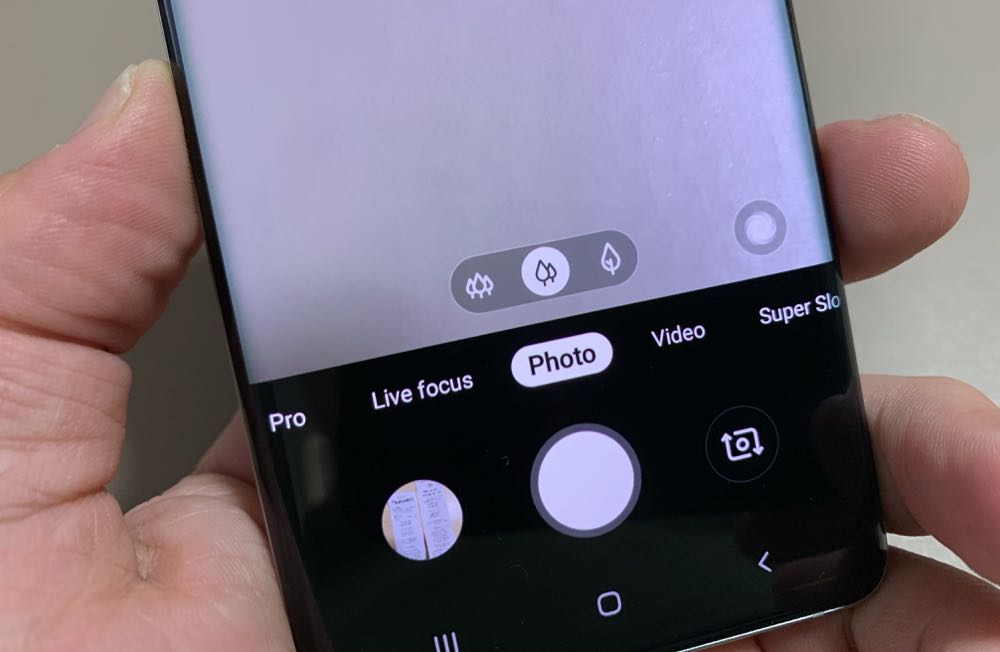 The ultrawide lens is particularly good for landscape shots and for just fitting more into your image.

On the front of the S10+ is the dual pixel autofocus lens and a second depth camera.

On the S10 there is only one front facing dual pixel AF camera.

With the front cameras, users can take their regular selfies, portrait shots with blurred backgrounds and even choose a wider angle to fit another person or a landmark in the background.

There were no complaints at all about the camera.

Not only were the pictures excellent but the camera itself was super-fast and responsive and we are able to capture our images in an instant.

We also didn’t mind the Shot Suggestion feature which helps you come up with the best framing for your image.

A small circle appears on the screen and all you have to do is move the device to make that small circle the centre of your image to come up with the ideal framing.

AI also comes into play to produce stunning images with instant recognition of 30 scenes to give you the correct saturation and contrast to get prograde images without having to those modes manually.

On the video side, the S10 does a great job recording video in 4K quality as well as the ability to record in HDR10+ – a first for a smartphone.

Super Steady is also on board to give you improved stabilisation and take the shakes out of your footage whether you’re walking down the street, riding a bike or skiing down a slope.

Artificial Intelligence is also on board to optimise performance from the CPU, the on-board memory, the battery and even the temperature of the device so it is only working hard when it needs to.

It’s even smart enough to remember the apps you use the most to make sure they’re ready to launch faster than anything else on your device.

Bixby has some handy new features with the S10+ including Bixby Routines which can be set up to automate various functionality depending on what you’re doing.

For example, with the Bixby Driving routine, the device will stay unlocked, display apps and fonts in larger sizes and have your favourite music streaming service ready to go.

You can do a similar set up for a work routine or an evening routine to put all the features you need at your fingertips and to optimise battery performance. 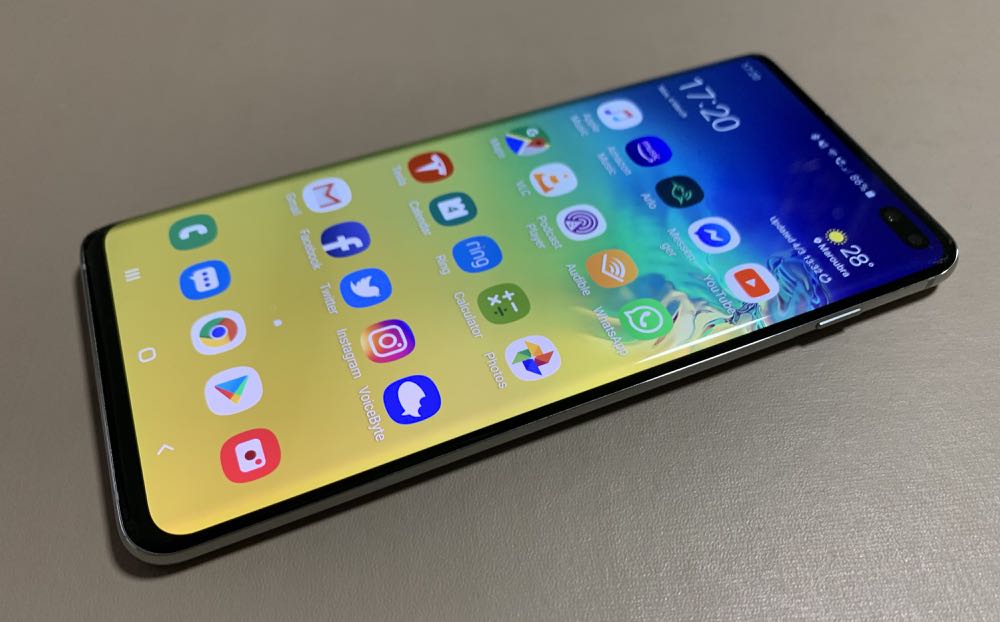 We’ve been using the S10+ has our daily driver for the past 10 days and the battery has never let us down.

It will easily run for the entire day even with extremely heavy use – and even then there was still about 30 per cent left in the tank.

It’s not quite two days battery performance but it could probably get you to a day and a half. 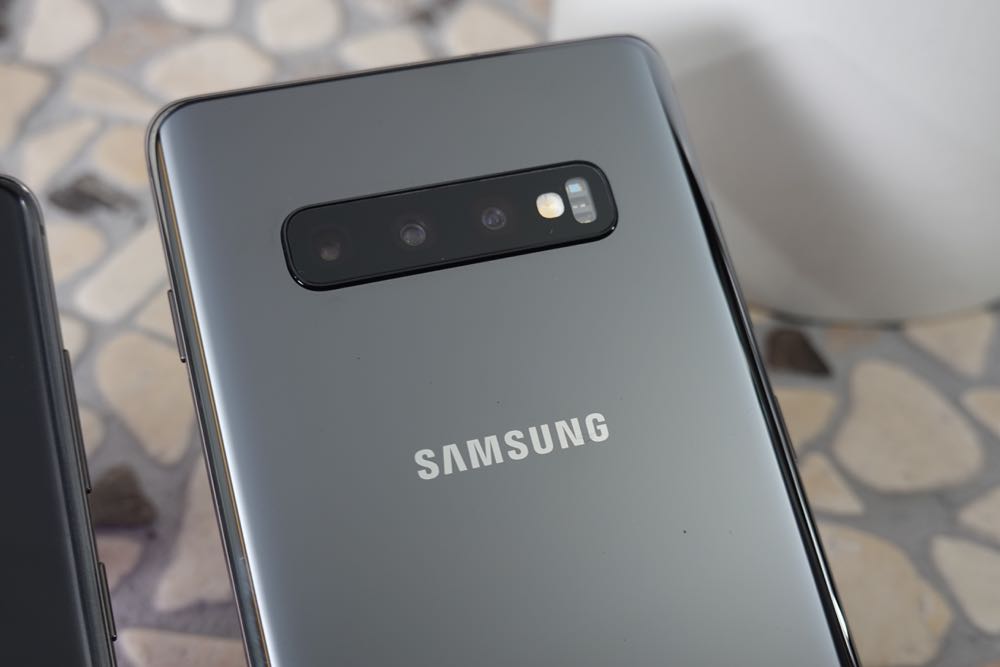 Another new feature onboard this year’s Galaxy S10 devices is Wireless PowerShare which basically turns the phone into a charging mat for other Qi-certified devices.

If your friends are in need of a power boost, even if they have a recent iPhone, they can rest it on the back of the S10 and receive some power that will help them get through the rest of the day.

This feature can also be used to charge up the new Galaxy Buds and the Galaxy Watch Active.

This is a game-changing feature they will keep your devices powered on the move. 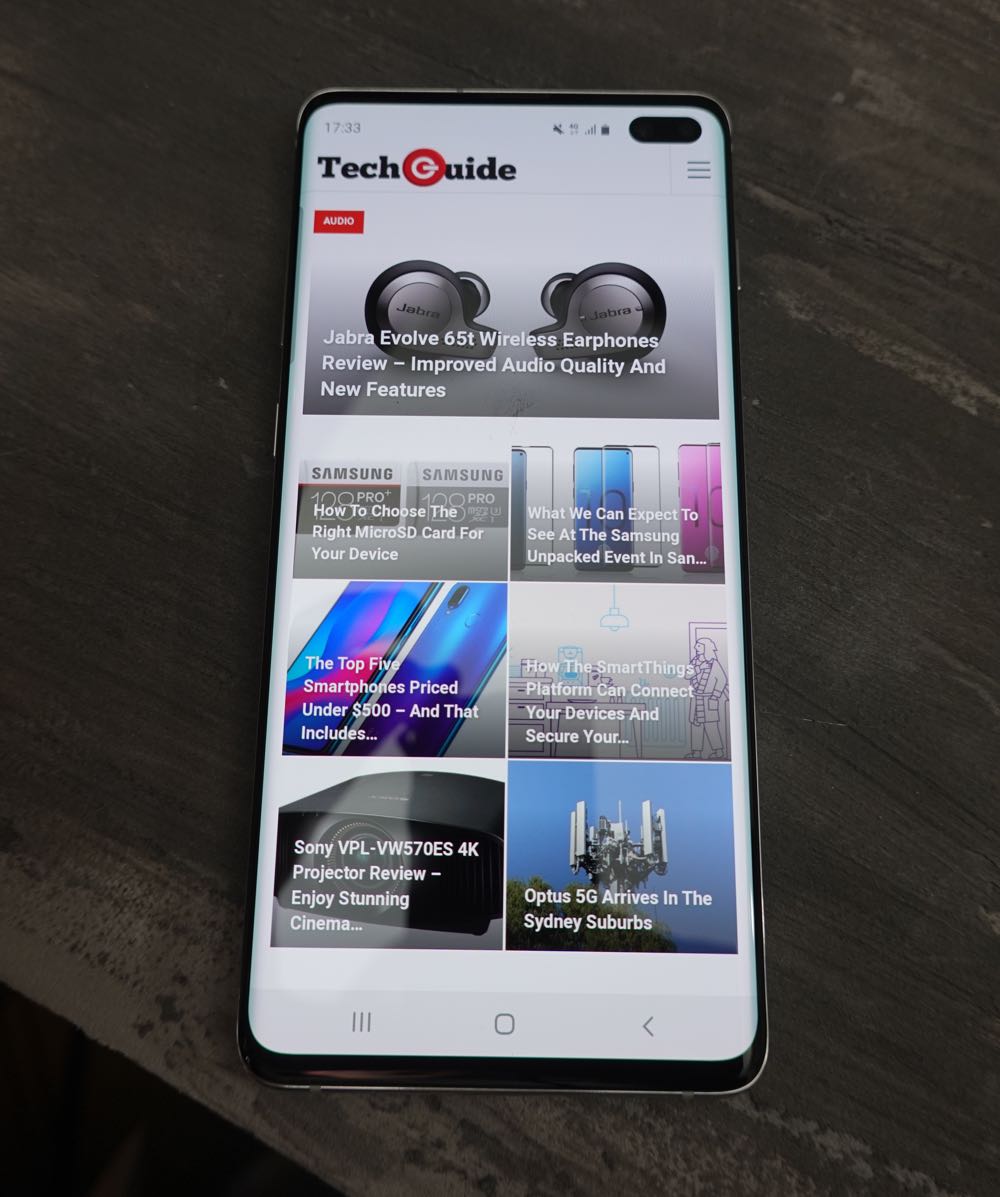 Samsung has produced easily its best Galaxy S device to date. It has come up with a device with superb build quality, with a stunning display, excellent camera and innovative new features.

Yes, Huawei came up with an in-screen fingerprint reader, a three-camera system and wireless reverse charging when it released the Mate20 Pro back in November.

But Samsung’s package is still quite compelling with the notchless display, high quality materials and the ecosystem it has built around it to now include Galaxy Buds, Galaxy Watch and other wearables.

The Samsung Galaxy S10 is one of the best flagship phones money can buy.

What is The Fastest VPN Protocol Available