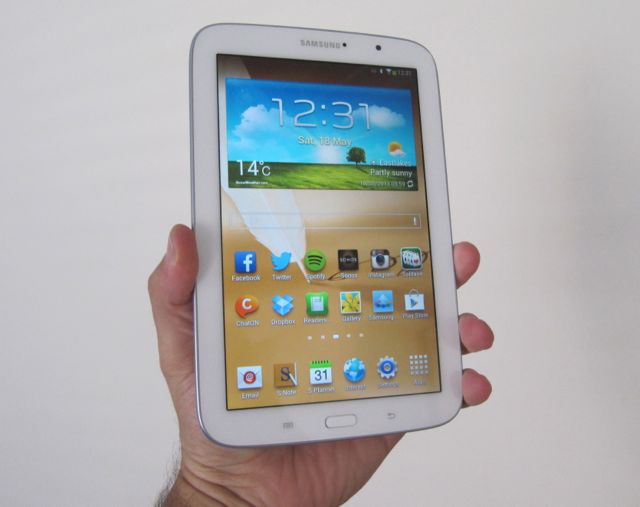 The Galaxy Note 8 is the latest Samsung tablet with an 8-inch screen size that’s proving to be popular with customers as the iPad Mini has clearly demonstrated.

But unlike the iPad Mini, the Galaxy Note 8 – as with Samsung’s other Note products – comes with a built-in S Pen stylus and the ability to draw directly and accurately on the screen.

Users have the best of both worlds to either use the device with the S Pen or as regular touchscreen tablet.

Running the Android Jelly 4.1.2, the Galaxy Note 8 has a sharp and bright screen with a resolution of 1280 x 800 and is powered with a 1.6Ghz quad-core processor.

The Samsung Galaxy Note 8 has maintained the same design and curves as its little brother the Galaxy Note II smartphone.

At that size is it easy to grip with one hand and no effort to hold for extended periods of time because it is so light.

The front of the Note 8 has a physical home and two soft keys either side – back and menu. There’s also a front facing 1.3-megapixel camera.

Down the right side is the on/off/lock button along with the volume up and down rocker switch with the headphone jack on the top edge and microUSB port and speakers on the bottom.

But unlike those other products the Note 8 is a sealed device.

There is 16GB of internal memory on the wi-fi only Note 8 but it does have a microSD card slot to easily expand storage capacity.

The standout feature of the Galaxy Note 8 is the S Pen that is conveniently stored in the bottom right corner of the device.

As soon as you remove the S Pen, the device goes into writing mode and presents the writing and drawing apps and templates on the home screen so you can dive right in.

Writing on the Note 8 screen with the S Pen is accurate and responsive.

Users have the ability to change the thickness of the pen stroke as well as the colours so it really opens up a whole world of creative possibilities.

The Note 8’s screen is very impressive and websites, pictures and movies look great on it. And with its convenient size you can have all of your favourite content by your side anywhere you go.

Samsung has also put its own TouchWiz user interface over the top of the Android operating system which some may feel hinders the true open and customisable nature of the Android platform.

We felt the TouchWiz UI wasn’t that obtrusive at all. In fact, it offered a few unique feature of its own including the ability to split the screen and run two apps at once.

Being such a convenient size the Note 8 is ideal to use an ereader and the Readers’ Hub acts as your virtual bookshelf where your favourite books can be purchased and stored.

But it takes it one step further with Reading Mode while using the S Pen. This allows readers to annotate directly on the screen.

You can copy passages, highlight them and even write notes associated with those highlighted passages.

The S Pen can also come into play when making calendar entries with the S Planner.

AirView is another feature of the S Pen when you simply hover the nib of the pen above the screen to see the contents of an email without having to open it or view the pictures inside a gallery.

The creativity options with the Note 8’s S Pen are also wide open because you can do things like clipping and selecting part of the screen or an image.

And of course there is not shortage of ways you can express yourself with drawings and painting. It’s like an art studio in your pocket.

But don’t forget once you put that S Pen back in its built-in holster the device can still be used like any other tablet through the touchscreen.

The Samsung Galaxy Note 8 has a snappy performance thanks to 2GB of RAM and the scorching 1.6Ghz quad-core processor.

This does all the heavy lifting for the user when it comes to opening and closing apps and switching between applications.

And it all also give the Note 8 the ability to easily multitask your apps and run two apps simultaneously as we saw with the split screen function.

One weakness for the Note 8 has to be the standard of some of the apps which can be downloaded from the Google Play Store.

Some apps would freeze and crash but these are more of a reflection of the apps than the Note 8 tablet.

But it should be pointed out some of Samsung’s own apps froze on us as well.

While reading a book in the Readers’ Hub we were unable advance the page or activate any of the other onscreen commands.

We had to exit the app and stop it running in the settings before we were able to resume our reading.

Thankfully this was a very rare occurrence. Apart from this, the Galaxy Note 8 performed flawlessly.

With a 4600mAh battery on board we were able to use the Note 8 for two days before needed to reach for the charger.

Even with continuous S Pen usage the battery can last up to 14 hours – that’s almost two full work days.

The Samsung Galaxy Note 8 ticks a lot of boxes in terms of size, features, design and performance.

Of course a device of this size is going to draw inevitable comparisons to the iPad Mini.

The Note 8 has a higher screen resolution, offers the convenient S Pen to draw directly on the screen and has a microSD card slot to expand the onboard 16GB memory.

But these comparisons aren’t exactly like for like with the S Pen and superior multitasking capabilities the clear differentiator for the Samsung Galaxy Note 8.

If these extra features suit your needs then it’s definitely worth paying extra for it.