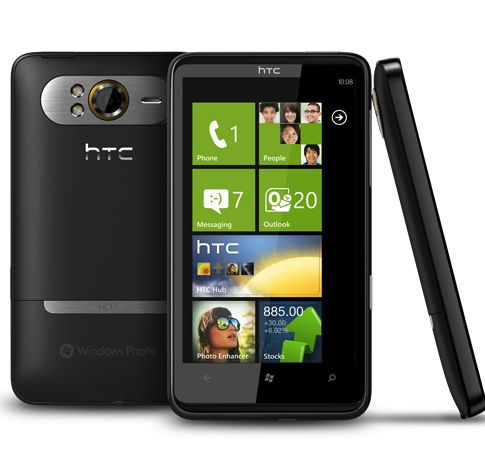 Microsoft has been making a lot of noise in the smartphone space of late since the huge deal it made with Nokia.

But the Windows Phone 7 software we can expect to see on those handsets is already available today and running on HTC’s hardware.

The HTC HD7 is a Telstra exclusive and has a massive 4.3-inch screen, a 1Ghz processor and a 5 megapixel camera.

And while it is impressive this will be as much a review about Windows Phone 7 as it is about the hardware itself.

The HTC HD7 is dominated by the massive 4.3-inch touchscreen with a resolution of 480 x 800 pixels.

Images and videos looks sharp and clear on the screen. There’s even a kickstand which unfolds from around the 5 megapixel camera on the rear panel to make it easy to stand up and watch movies and slide shows.

And if you look carefully there are also speakers on along a small ridge above and below the screen.

With Dolby Mobile and SRS surround sound these speakers also sound quite impressive.

The HD7 is a large device thanks to its monster screen but a curved rear panel, a thickness of just 11.2mm and a weight of 162g means it’s not too hard to carry it around in your pocket.

With a 1Ghz processor under the hood the HD7 is fast and easily meets the criteria Microsoft set for manufacturers who wanted to run its Windows Phone 7 operating system.

These include at least a 5 megapixel camera, 480 x 800 screen resolution and internal of storage of 8GB or greater.

The HD7 ticks all of these boxes and offers 16GB of internal memory. It would have been nice to get more or at least be able to expand the memory with a microSD card. With the HD7, users are limited to the 16GB on board.

As promised this review was going to take in the new Windows Phone 7 operating system which was announced back in October last year.

HTC, which also offers Android powered smartphones, were one of ther first manufacturers who put up their hands for Windows Phone 7.

Users are presented with home screen which can be customised with tiles which are short cuts to apps and other features.

A secondary screen lists all of the available apps. Users are able to choose any of these to pin to the home screen.

Part of the home screen is a people tile which aggregates all of your Facebook and Twitter feeds into one place so finding out what your friends are up to is just a screen touch away.

Being a Telstra device, there’s also a short cut to news, entertainment, sports and business headlines as well as access to other Telstra content like NRL and AFL action, the Yellow Pages and Bigpond services.

On the email front it is easy to set up an account on the device with an indicator inside the app’s tile showing the number of unread emails.

Microsoft has cleverly included Xbox Live on the device so users can take some of their games with them as well as being able to stay in touch with the online community.

And the good news is Windows Phone 7 is easy to navigate with intuitive controls giving the user instant access to the information and content that is important to them.

The touchscreen is responsive and is not only easy to scroll screen to screen but is easy to type on and can even keep up with you if you hit the keys quickly.

The included Internet Explorer makes web browsing easy and sites render as they would on your computer.

For photos and videos the HD7 also steps up nicely. Pictures taken with the 5 megapixel camera were good quality and videos were captured in high definition 720p resolution.

The Windows Marketplace offers a shortcut to some impressive apps including games, business, productivity and lifestyle titles.

The number of titles here is growing rapidly. It is still way behind Android and the iPhone but, with so many Microsoft developers hard at work, it is catching up.

The HTC HD7 has plenty of features to love but it would have been even more attractive with the addition of a few more.

It lacks a HDMI Out connection which could have displayed videos and images on a TV screen. This is becoming a common feature on similar devices and is sadly lacking here.

Battery life was also a little disappointing and the main suspect is the huge 4.3-inch screen it has to power.

But despite these, the HD7 is still an impressive device which does a good job showcasing the new Windows Phone 7 operating system.

Anyone looking for a simple and easy-to-use smartphone but doesn’t want to travel down the iPhone and Android road should give the HD7 strong consideration.

PlayStation Network will go back online this week

New Bold 9900 is the thinnest BlackBerry ever