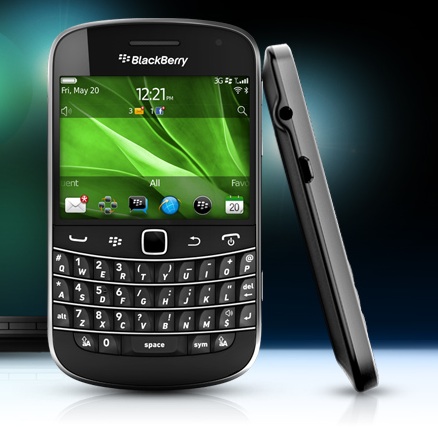 The BlackBerry Bold 9900 takes the already popular device to new heights with a sleek remodelled exterior, a updated operating system and a touchscreen.

The Torch 9860 ventures bravely into the full touchscreen category – an area where BlackBerry hasn’t had much success in the past.

The Bold 9900 builds on the best feature we loved on its predecessors – an amazing screen, impressive design, speed and that excellent physical keyboard.

The 9900 exudes quality with its glossy front and rear panels and stainless steel frame. It also feels great in your hands.

It’s also very thin – in fact it’s the thinnest BlackBerry ever at just a wafer-like thickness of just 10.5mm.

The 9900 is also running the new BlackBerry OS 7 which has improved the look of the interface and added some handy new features which include voice-activated universal search.

The 2.8-inch screen of the 9900 is also a standout feature. It’s sharp and bright and makes pictures and videos look great.

But this time out the 9900’s impressive 640 x 480 display is a touchscreen. And while that sounds like the BlackBerry is keeping up with the times we found the touchscreen ability to be a novelty.

Users can’t use the screen to type or dial numbers – there’s a perfectly good physical keyboard for that.

The touchscreen allows users to scroll through the apps on the screen and select them while offering limited touchscreen interactivity.

Basically there’s nothing you can’t do with your finger on the screen that you can’t easily do with the trackpad.

On the performance side, the 9900 is no slouch thanks to the 1.2Ghz processor. Apps opened instantly whether they were accessed through the touchscreen or the trackpad.

Another noticeable improvement is the onboard 5 megapixel camera which has face detection and image stabilisation and a flash.

For a smartphone the performance of the camera was impressive with virtually no shutter lag and the ability to capture 720p high definition video.

There’s also 8GB of memory on board plus a microSD car slot to expand that by up to an extra 32GB.

Of course it goes without saying that the BlackBerry’s ability as an email and messaging device is without peer whether it’s for work or personal use.

And the battery kept it powered up nicely for a day and half before we needed to reach for the charger.

For fans of the BlackBerry Bold – the 9900 is definitely worth an upgrade. For those tempted to enter the BlackBerry world for the first time – this is a great place to start.

The last time there was a BlackBerry that was full touchscreen it was called the Storm and it was a disaster.

This time around the good news is there have been some major improvements starting with the screen.

The 3.7-inch TFT display has a 800 x 480 resolution is responsive and it’s easy to navigate either through the touchscreen or the physical keys and trackpad just below the screen.

But one thing you don’t get with the Torch 9860 is a physical keyboard.

The previous Torch had both a touchscreen and a physical keyboard but the downside of that scenario was that the device was a little on the chunky side.

With the Torch 9860 the physical keyboard is gone so it’s a lot thinner at 11.5mm but,  on the downside, you’ve got no choice but to use the virtual keyboard.

It was the physical keyboard which kept the die-hard BlackBerry users loyal to the platform instead of moving towards the iPhone or an Android device.

It’s hard to imagine a power BlackBerry user who’d abandon their physical keyboard for a full touchscreen device – even if it was another BlackBerry.

The virtual keyboard aboard the Torch took us a little getting used to. In portrait mode the keys are a little close together and the delete key is too small so we kept getting five Ls in row when we wanted to correct something.

What does help is the predictive text function which does a good job trying to work out what you’re trying to say.

It was a lot easier to type when we turned the Torch 9860 sideways with the keyboard expanded in landscape mode. But it still couldn’t hold a candle to a physical keyboard. No touchscreen device can.

That aside the Torch 9860 has a few impressive features. The larger screen is great for enjoying videos and browsing the web.

Like the Bold 9900, the 5 megapixel camera really punches above its weight with face detection, image stabilisation and an almost instant shutter response.

It can also shoot 720p high definition videos which look impressive when played back on the device’s screen.

It has the same operating system as the Bold 9900 as well as the same fast 1.2Ghz processor.

The Torch 9860 couldn’t quite match the Bold 9900 in terms of batteru performance because it has to power a larger touchscreen but it was still good enough to easily get through a full day’s work and heavy usage.

The BlackBerry Torch 9860 has a lot to offer with its touchscreen, speedy performance and excellent camera but not including a physical keyboard was a brave decision. But one which may deter loyal BlackBerry users adopting this new stylish model.

Price: Available from Optus for $0 on plans starting at $79.

Price: Avaiable from Optus for $0 on plans starting at $49.

Three and half stars (out of five)