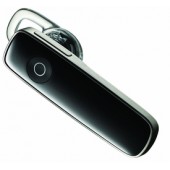 Remember not so long ago when Bluetooth headsets were bulky and dorky looking? Not anymore. Plantronics’ latest Bluetooth device – the Marque M155 – is neither bulky nor dorky. In fact, it’s so small you’d hardly notice anyone wearing it.

It is less than 5cm long and less than 1cm thick and lightweight yet still packed with a number of useful features including voice control and easy pairing.

The device also has a companion app for iPhone and Android smartphones which can help guide users through the pairing process and do a lot more than just answer calls. The MyHeadset app is also quite a thorough instruction manual.

The Plantronics Marque M155 has three controls that are easy to use despite the product being so small.

These are on/off, answer and volume but the larger answer button the top of the device that is the shortcut to a range of commands and functions like answering or rejecting a call, redialling and pairing.

The Marque M155 fits snugly in the ear and comes with three different silicone ear tips to find the right fit for everyone. There’s also a detachable ear hook for those looking for even more stability.

Pairing is simple either manually with the device itself or through the app.

Once connected, the app can come into play again with Sound Check so you can test and adjust your own audio clarity. Sound Check can also be used to record personal notes or reminders which can be attached and sent via email.

Sound quality is loud and clear. We were able to easily hear our calls quite easily but that quality did take a hit in loud environments so noise cancellation was slightly lacking.

One of our favourite features was the voice control that allowed us to answer or reject calls simply by saying “answer” or “ignore”.

These commands worked about 80 per cent of the time for us. It only failed in noisy surroundings. The Marque M155 worked perfectly indoors and in our car.

But the voice commands don’t end there. The Plantronics Marque M155 also allows users to dial contacts, dial numbers and even make a FaceTime video call if the device is paired to an iPhone 4 or iPhone 4S.

The device also extends voice control to music playback and users can even select artists by song and by album, shuffle their current playlist and stream the audio right to the device thanks to A2DP compatibility.

There is another feature called Vocalyst which is only available to US customers with an annual subscription which makes it possible to take voice control to even greater use including posting social network updates, sending and listening to incoming emails and text messages. This feature is not available to Australia customers.

When connected to an iPhone, a battery meter appears at the top of the screen so you can easily monitor exactly how much power is left on the device.

The Marque M155 also comes with a 2-in-1 charging cable which means the device and your smartphone can be charged simultaneously from a single USB port.

It also features multi-point technology that means you can pair and maintain two connections to the device at the same time.

The Plantronics Marque M155 is a small and stylish Bluetooth headset which is also backed by a great app and, despite its slight noise cancellation issues, is a good way to maintain a hands-free connection to your mobile.

Enjoy an iShower with all of your favourite music