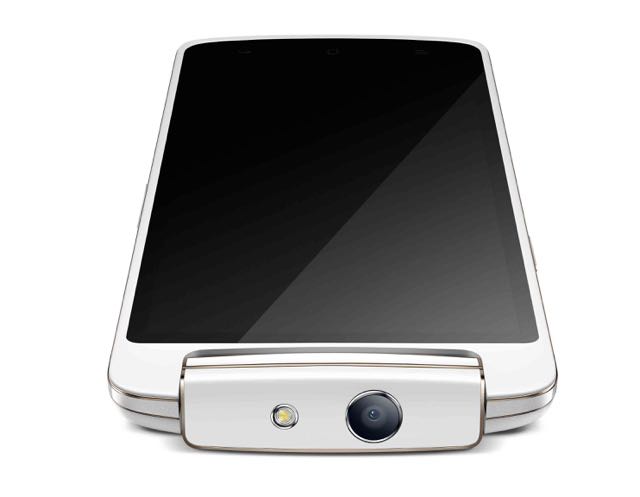 Oppo isn’t a brand we usually associate with smartphones but the company’s first crack at the Australian market – the N1 Mini – is a device with a difference.

The Chinese company is best known for its top quality Blu-ray Disc players but it has taken its expertise in a new direction into the lucrative smartphone market.

The N1 Mini is part of the first wave of devices and is aimed at the customer who thinks of their device as much as their camera as they think of it as their phone.

Like every other smartphone, the N1 Mini has a camera – a very good one at that – but it’s not like the camera you’d find on those other devices.

The 13-megapixel camera is located on a rotating module on the top of the device so it can be faced forward, back and even to the side. In fact, any angle you’d like to position it.

So whether you’re capturing a scene or a selfie you’re using the same high quality camera that also has a flash.

Those selfies – usually hard to capture in low light situations because of the lack of a front-facing flash – now have ample illumination with the N1 Mini.

Having the rotating camera makes it quite versatile – and not only for selfies.

It also allows you to capture images at difficult angles so instead of holding the N1 Mini at odd positions – just tilt the camera to adjust the view while still having an easy view of the screen.

It has a F2.0 large aperture that can allow even more light to the onboard Sony CMOS sensor to increase the brightness of your images.

There’s also a super zoom to get even closer to your subjects plus a beauty mode to help take some of the blemishes off the recognised faces in the shot.

Another fun feature is the slow shutter that can expose an image for 32-seconds – great for capturing moving objects in a new and artistic way.

Photos captured with the N1 Mini were impressive with good natural colours sharpness.

But hang on – this is a smartphone as well remember so you’ll be looking at a 5-inch TFT IPS (in-plane switching) screen with a resolution of 1280 x 720.

The device is a slim 9.2mm thick and has a gently curved rear panel to fit in your hand even better.

There’s a generous 2GB RAM onboard as well as 16GB of onboard memory. Unfortunately there is no microSD card slot to expand that storage.

On the battery front the Oppo N1 Mini does go the distance and we easily went more than a day on a single charge with solid and constant use.

The device is available in two colours – white and cool mint (which is a very pale green).

It is priced at $539 and is available now directly from the Oppo site here.

The Oppo N1 Mini is great value mid-level device that offers an impressive photographic experience with its swivel camera while delivering the features you’ve come to expect to your smartphone in an easy and fun way.

Your smartphone is stalking you, why it’s doing it and how to turn it off