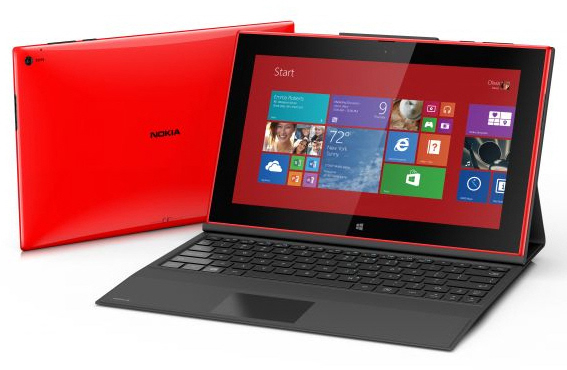 Nokia has thrown its hat into the tablet ring with a well-designed 10.1-inch device called the Lumia 2250 that’s runs Windows 8.1 RT.

Announced at a special event in Abu Dhabi, the Nokia Lumia 2250 will have built in 4G along with wi-fi connectivity to make it possible for users to access the internet from anywhere.

The device will run Windows RT 8.1 – a light version of the operating system – so, like the Windows Phones, it will only run apps designed for it.

The Lumia 2250 display is designed to easily readable even in bright direct sunlight by offering less reflection and superior brightness.

Onboard is the 2.2Ghz quad core Qualcomm Snapdragon 800 processor which offers excellent battery economy and enough power for up to 10 hours of video playback.

Another advantage is the fact the battery recharges quickly with 80 per cent capacity possible after just an hour of charging.

Nokia, which was purchased by Microsoft recently, also announced two large smartphones (or are they small tablets?) with 6-inch screens – the Lumia 1520 and the Lumia 1320.

These “phablets” are both are running the Windows Phone operating system and have so much extra room on the screen it is possible to fit a whole extra row of apps on the home screen.

Included with the new devices are new apps – Beamer and Refocus.

Beamer makes it possible to stream what’s playing on the device’s screen with a web browser or on another display.

Refocus – as it’s name suggests – lets you easily change the focal point of your photo so the user can choose to have the foreground or background in focus.

The Nokia Lumia 1520 will be priced at $US749 and will be available early next year.