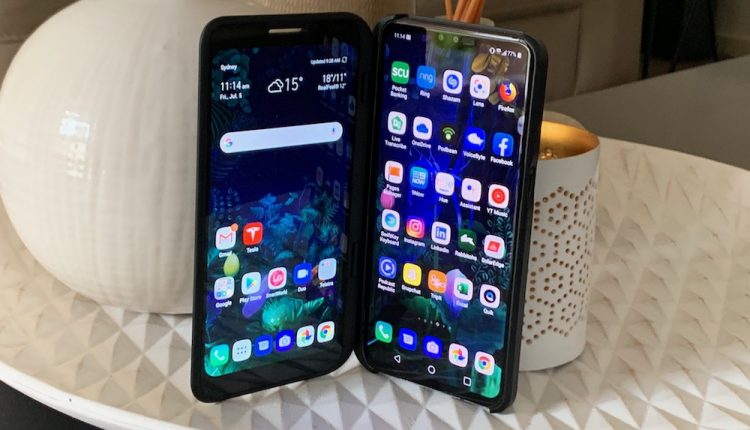 The LG V50 5G stands out from the crowd thanks to that handy dual screen accessory and include several features customers will enjoy whether they want to work or play.

LG is one of the first brands to launch a 5G smartphone – the V50 5G – in Australia and customers are fortunate enough to also receive the device’s standout accessory – a second screen.

There are two front facing cameras above the screen and users have the choice of squaring off the display or having a notch at the top. We chose the notch to make the screen appear larger.

The device doesn’t look much different to its predecessor with the same rounded edges and similar look and feel.

There’s a fast fingerprint reader on the rear panel that unlocks the device in a split second.

At the bottom of the rear panel are three contacts which connect the phone to its dual screen accessory – but more about that later.

Also on the back is a three camera system which includes a 16-megapixel wide-angle lens, a 12-megapixel telephoto and a normal 12 megapixel lens. 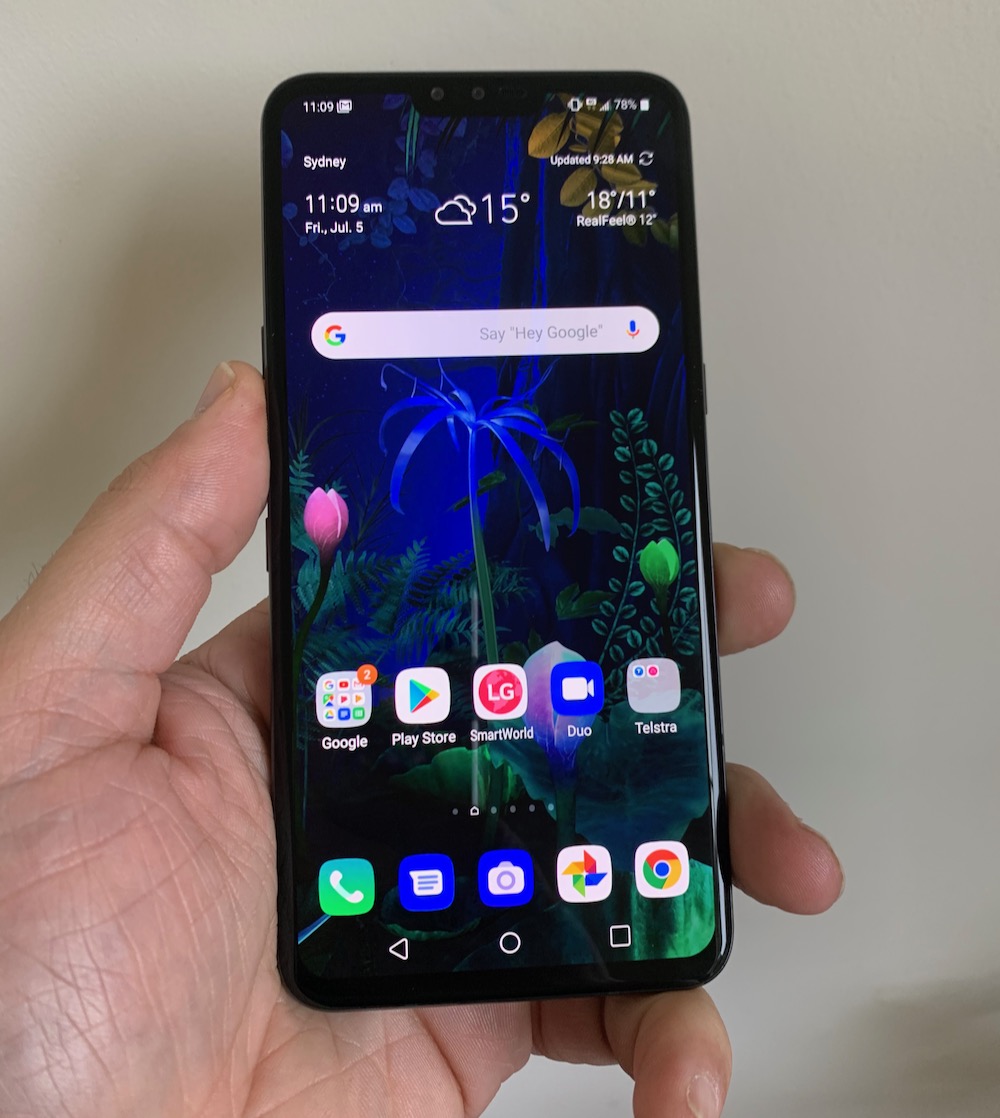 Suffice it to say the LG takes remarkable images are as you’d expect.

Our photographs were sharp and clean and, with all those lenses at your disposal, it is easy to take wide-angle, regular and close-up images at the press of a button.

This is a feature we’ve seen in previous LG smartphones are naturally the company included this excellent feature in the V50 5G.

And if you’re shooting movies you can also adjust the background blur using a slider on the screen and see the effect in real-time. 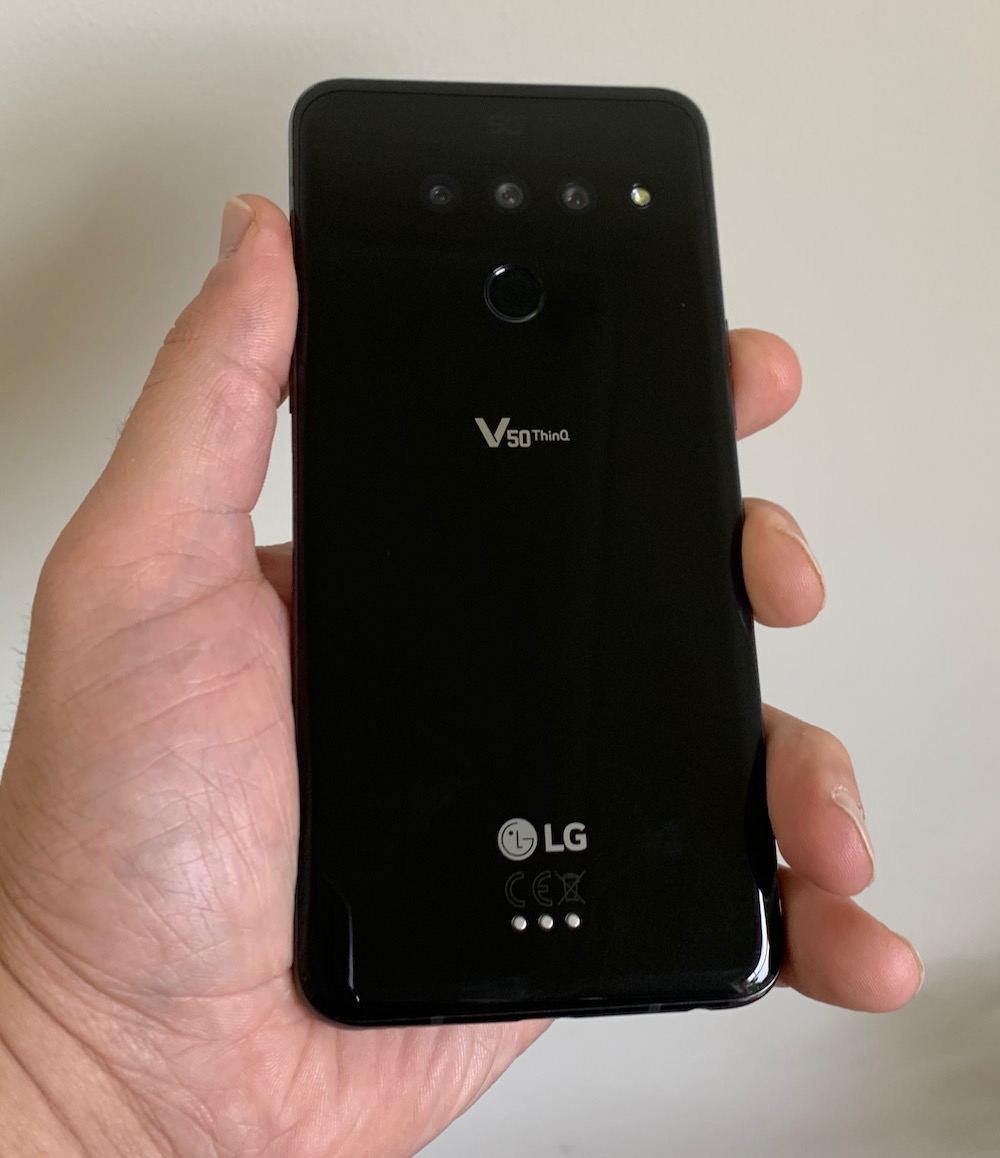 The LG V50 5G is powered by the Qualcomm Snapdragon 855 processor which means it offers smooth performance.

Under the hood is 6GB RAM and 128GB of storage as well as a microSD card slot to expand that memory even further.

And, of course, it is a 5G phone and speeds on the network will depend on where you are. 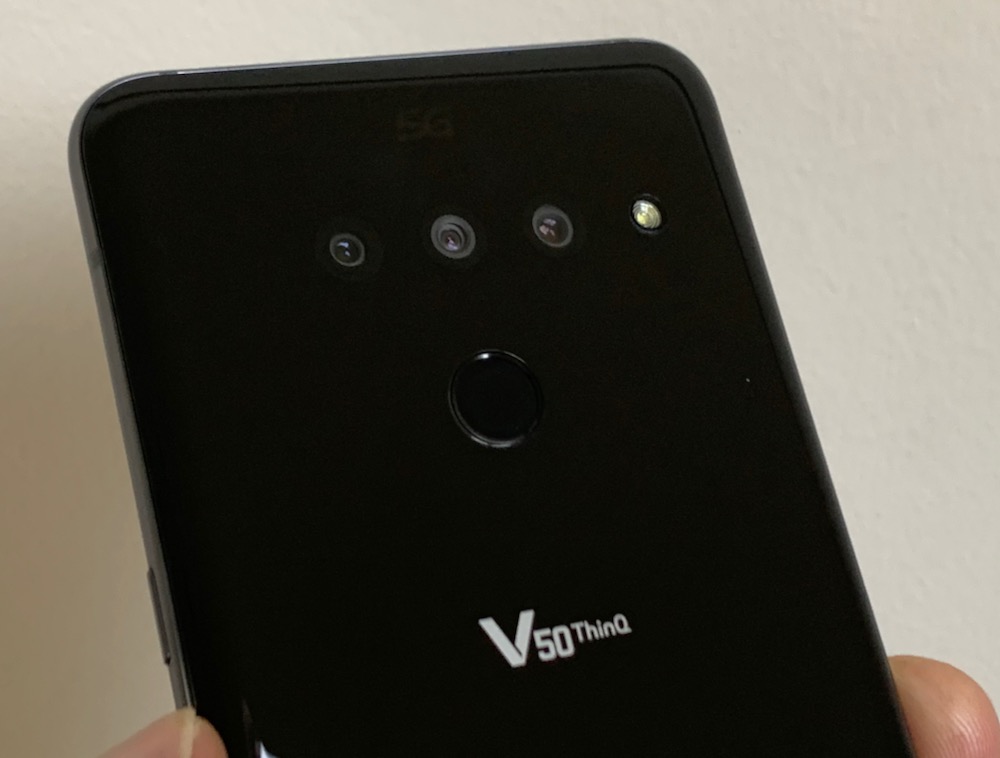 Our experience with the device using it in the Sydney CBD and near the airport was impressive and we were seeing speeds of up to 250Mbps.

And this is only going to get better as the 5G network footprint expands.

What we wanted to focus on here was the dual screen experience it provides courtesy of the included accessory. 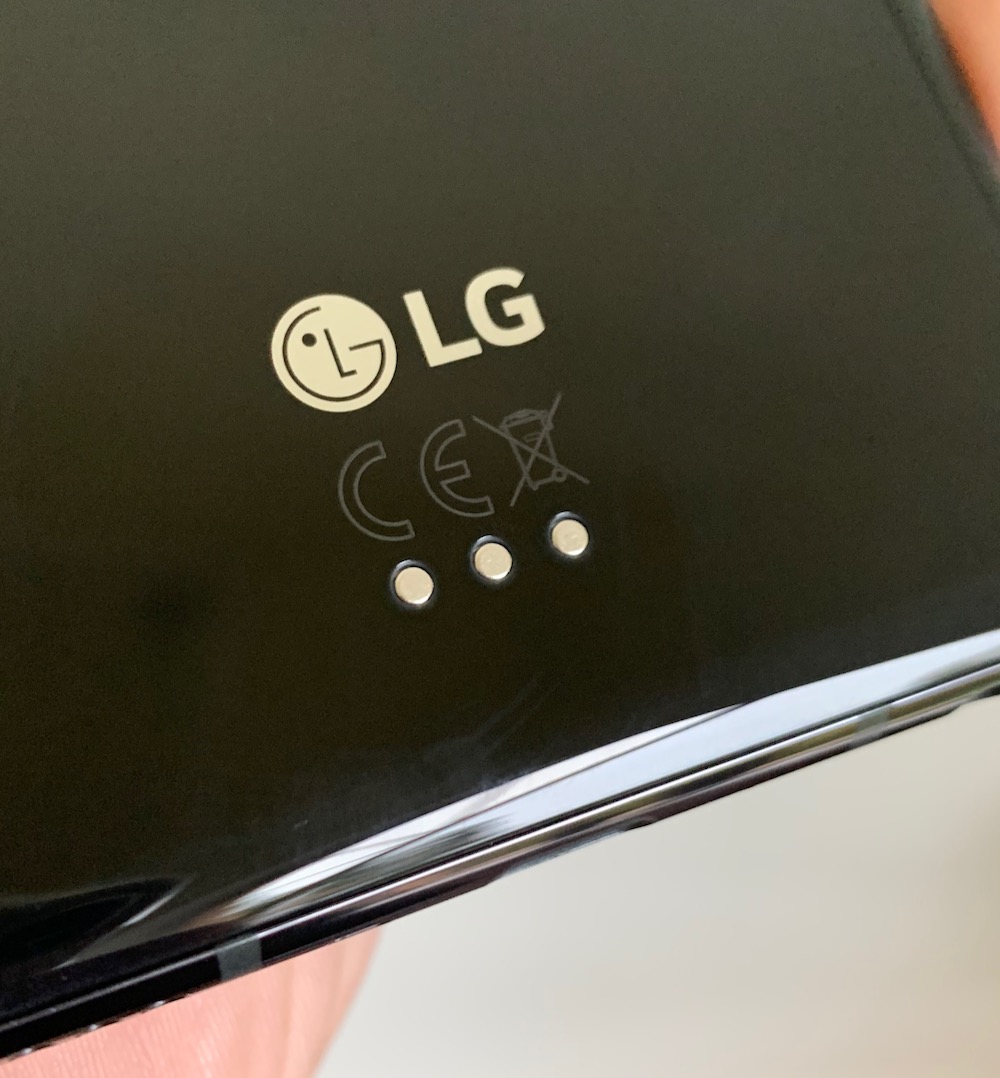 Some other territories where the LG V50 5G is on sale don’t include the dual screen case but here in Australia it comes with it in the box.

The dual screen accessory opens up to reveal a screen on the left and what looks like a phone cover on the right.

When you slip the LG V50 5G into place it powers the second screen to life. 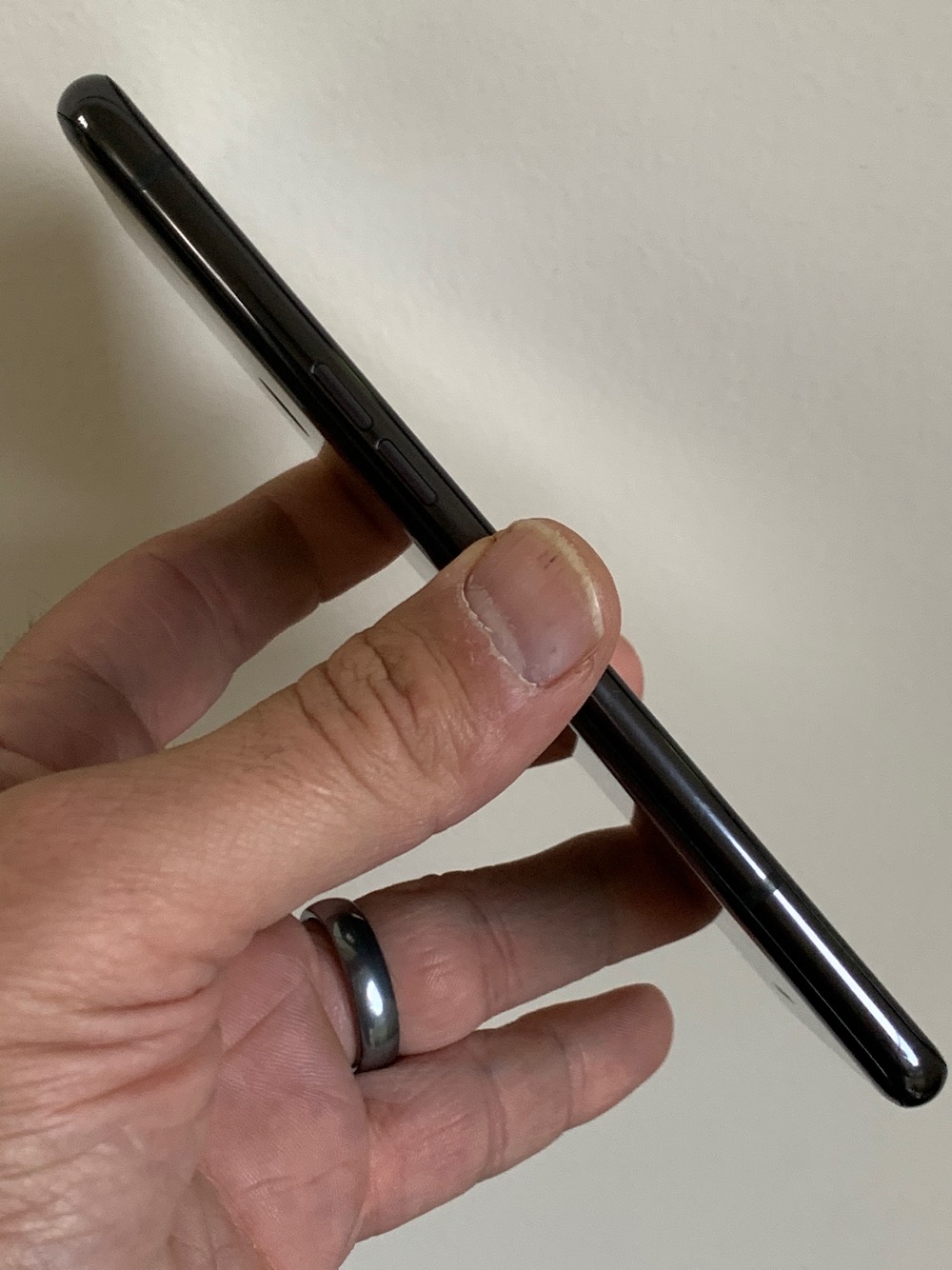 On its own the phone is a good size and fits comfortably in your hand.

But inside the dual screen accessory it obviously becomes thicker and heavier.

Two screens are better than one and having more screen real estate on a smartphone is really handy especially for those who are working on the move.

It’s possible to have one screen running one app and doing something else on the other. 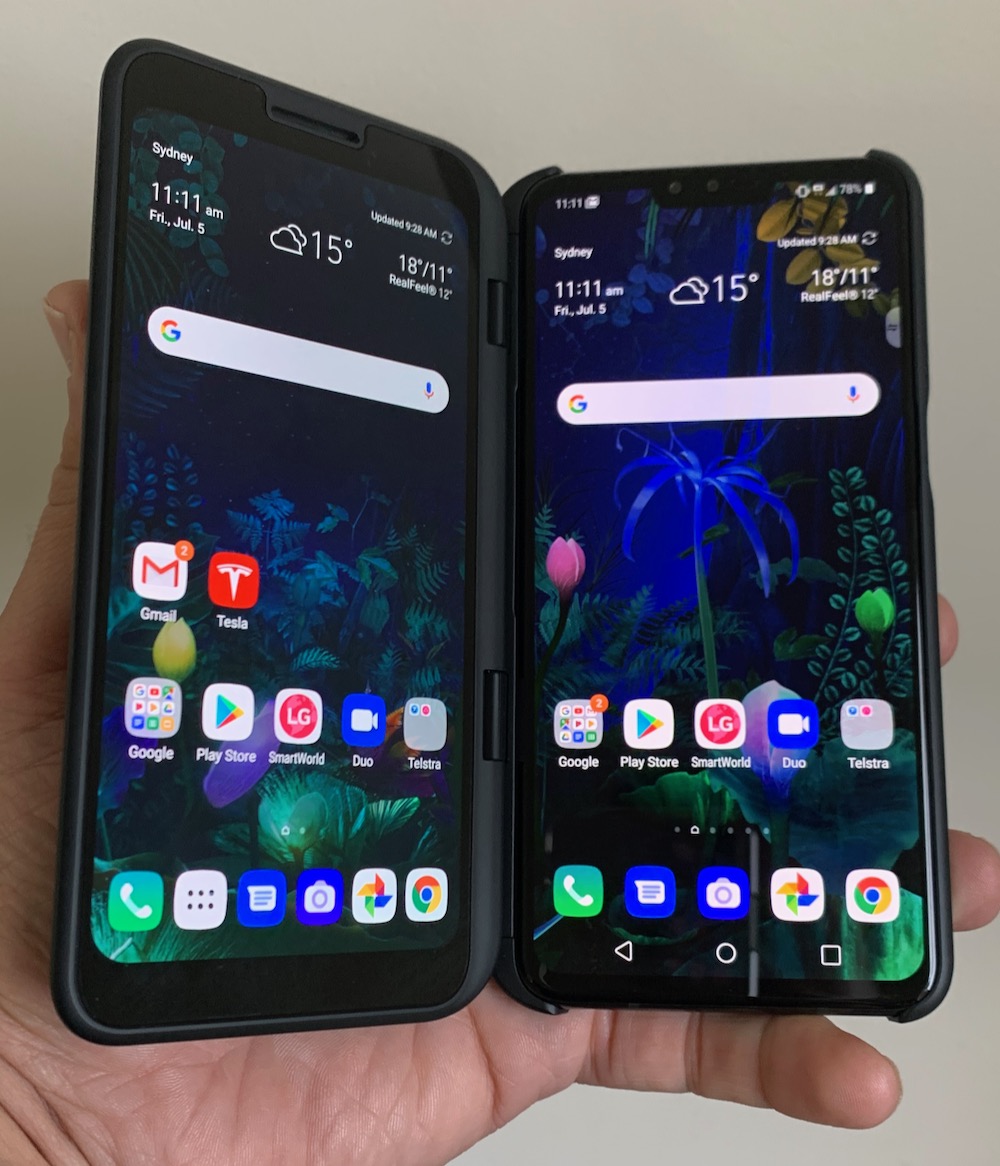 For example, you may be looking at social media on one screen and checking your emails on the other.

Another scenario might be watching a video on one side and running a separate app on the other.

But there are some occasions where you can use both screens for the same task.

You may have a keyboard on one screen and your working space on the other. 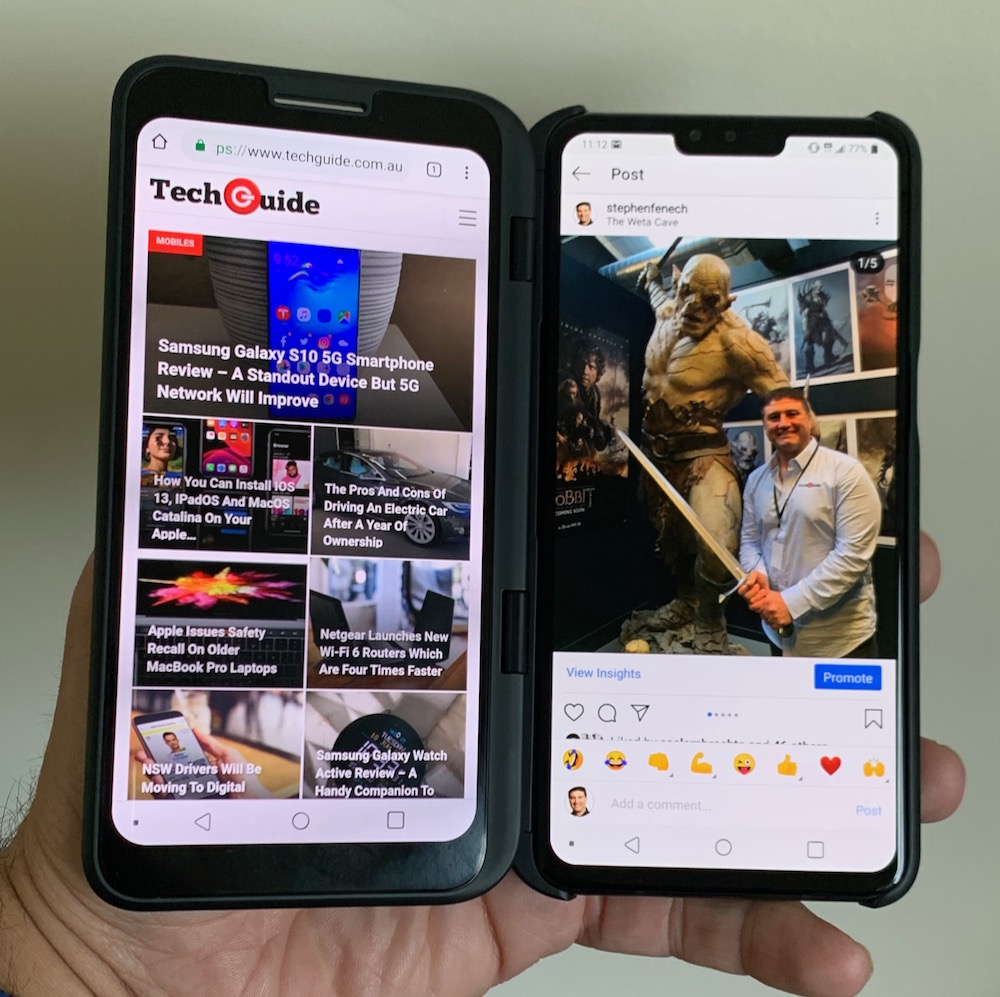 For gaming it also adds a whole new dimension by allowing users to have the action on one screen and all their controls on the other.

But there are still a few limitations and not all apps are designed to work like this.

For the most part, you have two separate screens and can’t move content from one to the other like you would with two monitors connected to the same computer.

Using the phone with this dual screen accessory is a little cumbersome. 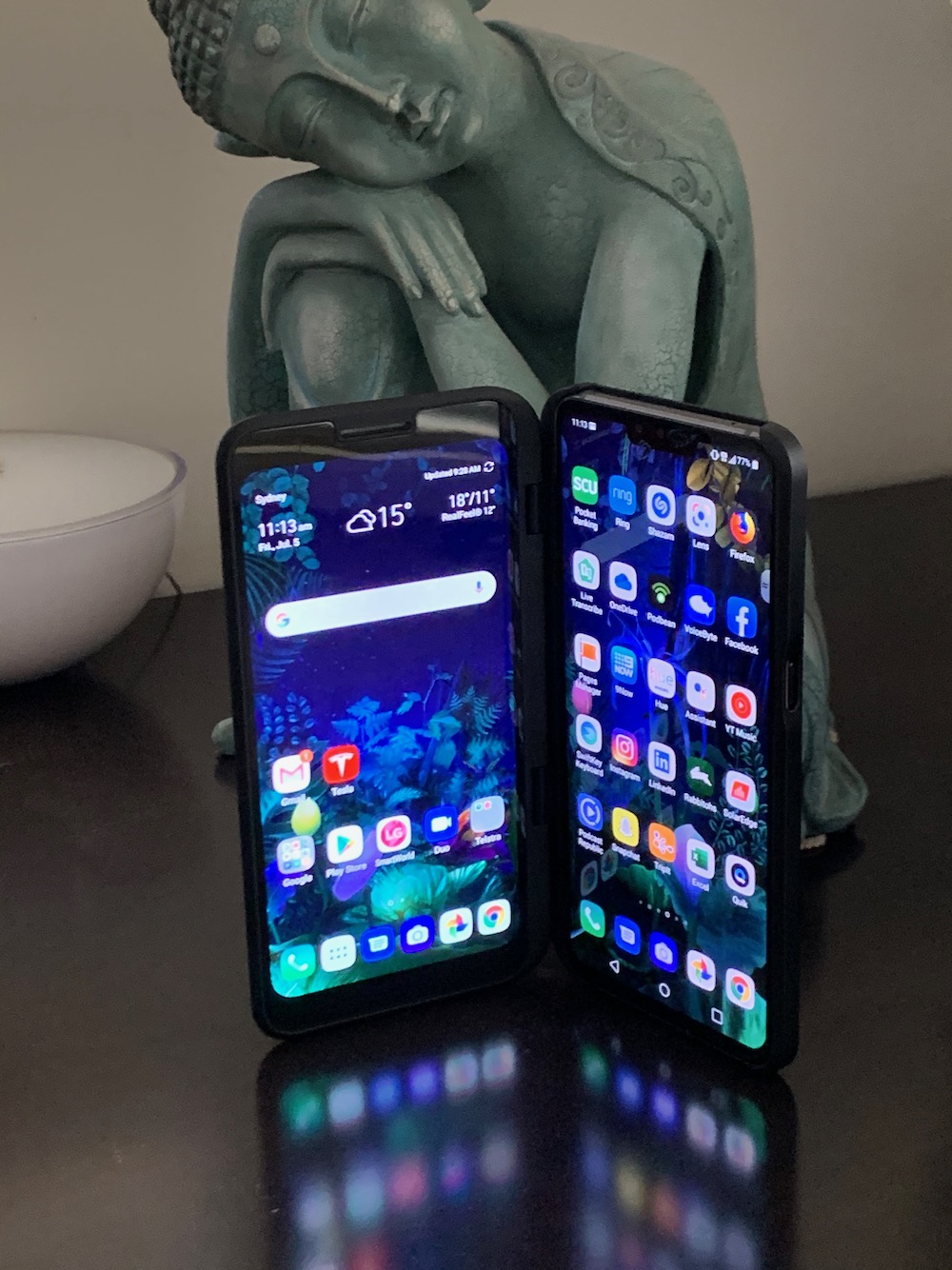 You can still take photos through the back cameras thanks to an opening in the case.

It’s also possible to answer your phone calls even when the V50 5G is folded shut .

The second screen can also be folded back behind the phone to give you unfettered access to the device.

It’s also possible to sit the device on the surface and position it like a laptop. 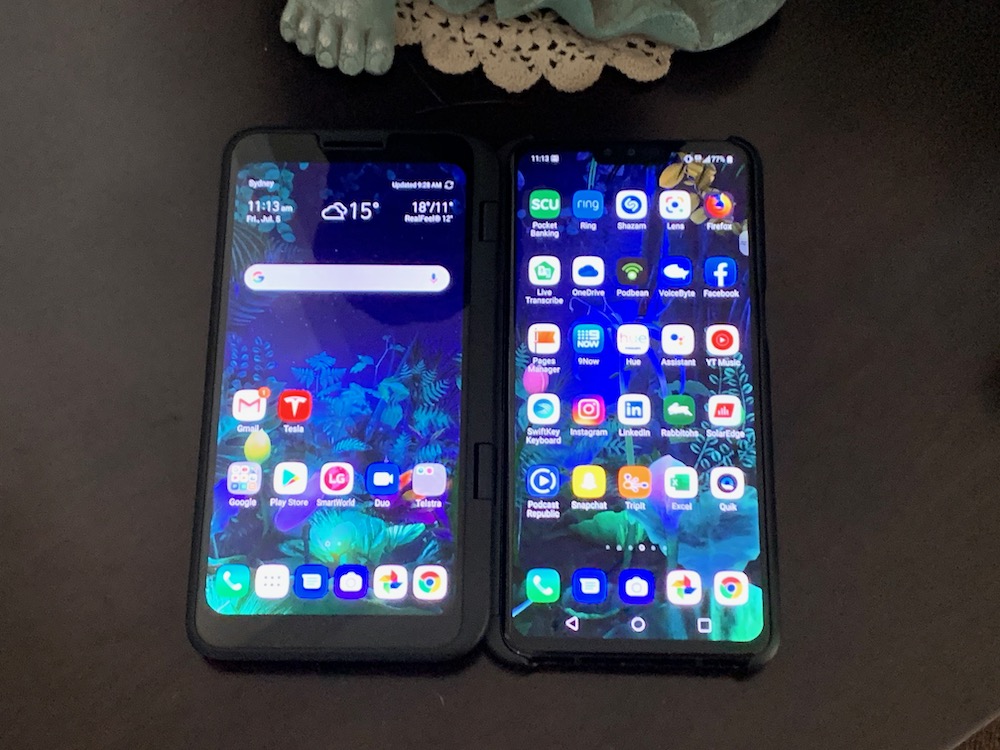 The second screen can be positioned at a few angles to make it easier to view content. 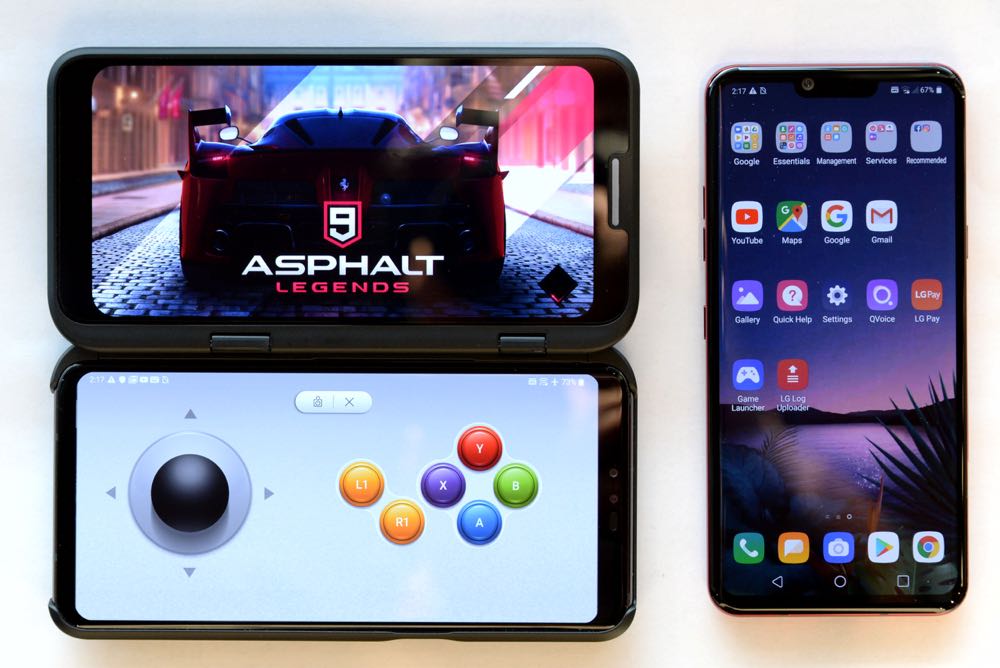 It’s possible to move this icon up and down the right edge of the main screen so it doesn’t get in your way when using other apps.

The accessory draws power through the V50 5G’s 4,000mAh battery.

It does not need to be charged on its own because it doesn’t have its own battery. 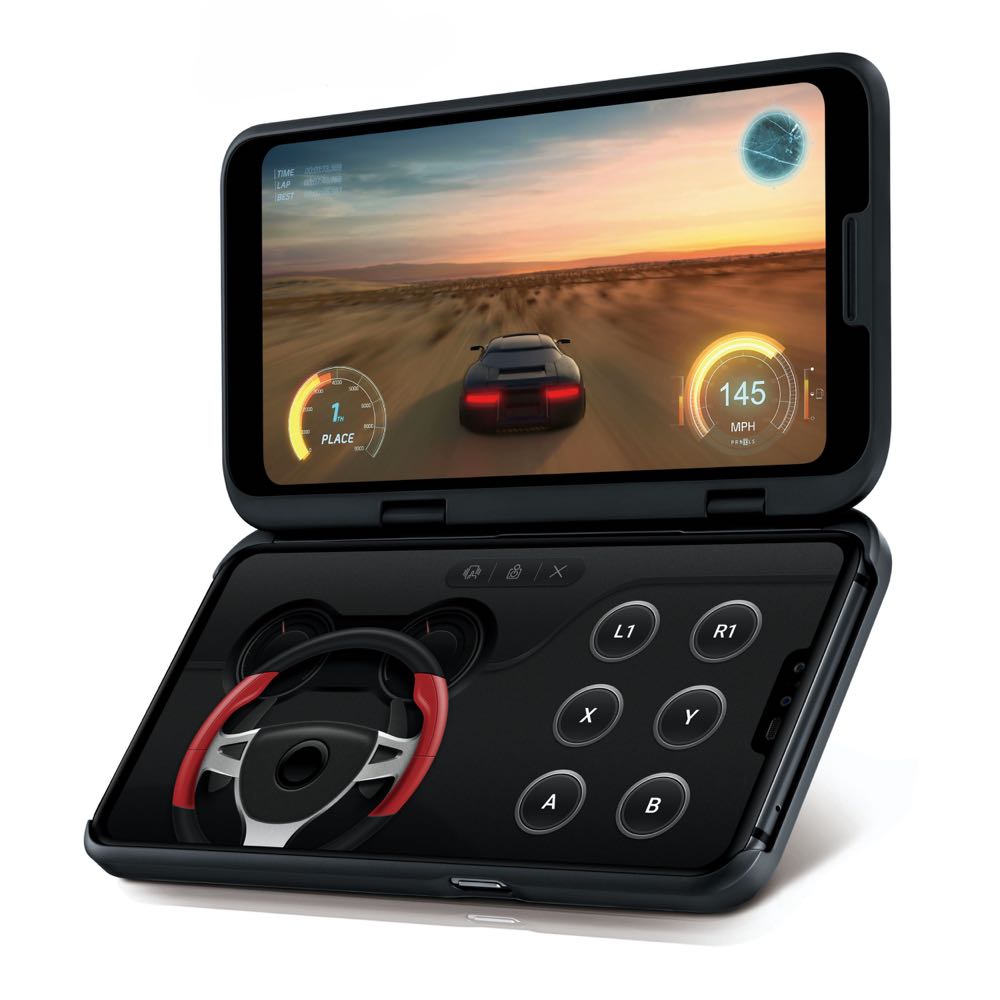 The downside of extended use of the dual screen means your battery will be run down dramatically.

For our review we spent most of the day in dual screen mode and by the afternoon we had to reach for the charger.

But the LG V50 5G on its own easily made it to the end of the working day and into the night.

With the dual screen attached, you’re going to see your battery running down a lot faster. 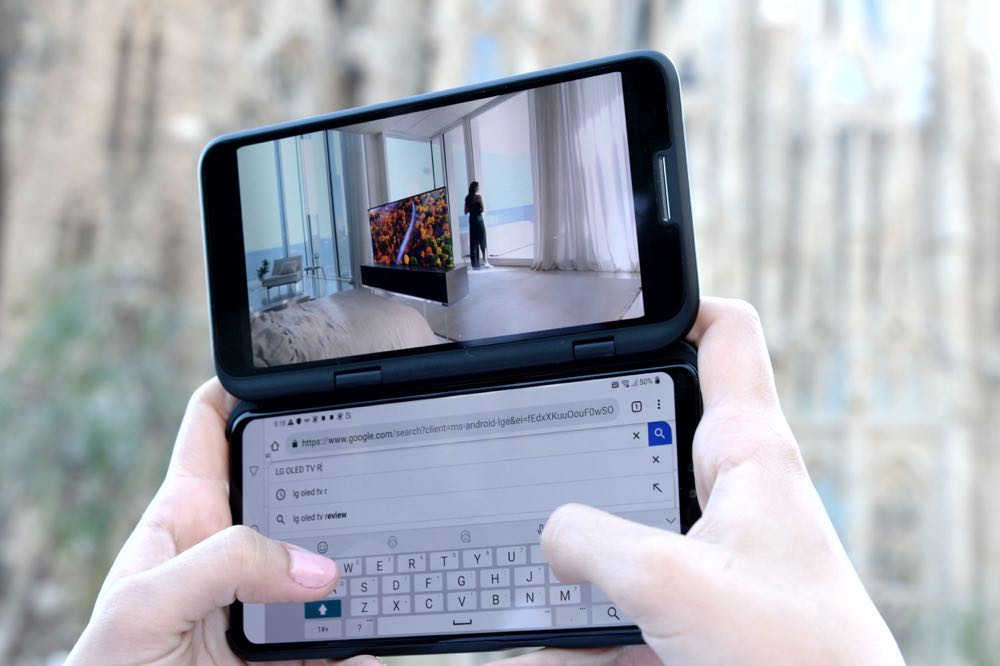 But at least you have the choice and you’re not stuck with any one option.

On its own, it might not have attracted much attention but with that dual screen accessory it certainly gives it a lot more appeal to customers.

And including it with the phone, rather than forcing customers to pay extra, will make it a lot more attractive to users. On its own it would have been a tougher sell.

The LG V50 5G stands out from the crowd thanks to that handy dual screen accessory and include several features customers will enjoy whether they want to work or play.