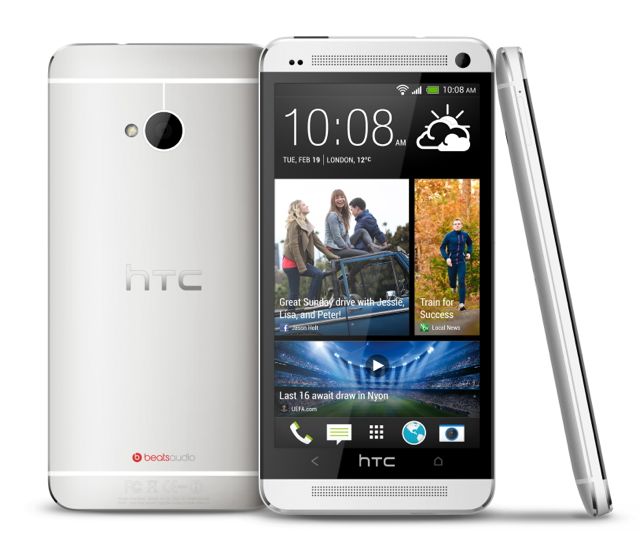 HTC seems to have found another gear with its latest flagship smartphone – the HTC One – that sports a sleek design and some excellent new features.

As far as Android devices go – the HTC One us one of the best we’ve ever seen.

One of the strengths of the HTC One is the design and the company has paid even more attention in this department and presented it in the same revered manner we see with Apple whenever a new iPhone is revealed.

The smart design starts with the “zero-gap” construction which highlights the precision and quality of the build.

The metallic rear panel is gently curved so that it rests more comfortably in your hand.

Between the metal on the front face and metallic rear panel is a white plastic middle layer that is where all of the buttons and ports are located.

The top edge has an on/off/lock switch, the right side has the volume rocker switch which is actually embedded almost flush into the device.

On the left side is the SIM tray and the bottom is where you’ll find the microUSB charging port.

With its sealed design there is no way to expand the internal 32 or 64GB memory and no way to get at the battery.

The sealed design where users can’t access the battery seems to be the trend with the latest Android smartphones – the Sony Xperia Z, the LG Optimus G and now the HTC One. It’s the same deal with the BlackBerry Z10 and Apple’s iPhone 5.

The front of the HTC One has a 4.7-inch full high definition 1920 x 1080 screen with 468ppi (pixels per inch) and has a speaker grille above and below the display.

What we like about the HTC One and its features are that they are not just gimmicky extras but useful additions people will use.

Let’s start with BlinkFeed which can turn your homescreen onto a stream of news, information and social media updates.

Rather than diving into several apps to find the same information, BlinkFeed puts all of that info front and centre.

It’s also very easy to scroll through the content one screen at a time.

BlinkFeed acts as one of your homescreens and, if you’d prefer to have apps at your fingertips, you can simply swipe right to left and be presented with a regular homescreen with access to your favourite apps.

The camera on the HTC One is another place users will find some interesting features.

First of all the HTC One doesn’t state a megapixel resolution to its camera – it is simply listed as an Ultra Pixel camera (we believe it’s 4 or 5 megapixel) with a flash and is capable of shooting full high definition video.

The front camera is 2.1-megapixel with a wide-angle lens to fit in even more in those self-portraits.

One new camera feature is Zoe which shoots a mini video just before you take your picture and a few frames after so you have a mini movie with sound along with your favourite frame. It’s a little bit like the Vine micro videos being shared on Twitter.

Picture quality is impressive and images hold up reasonably well when they’re blown up or cropped although it’s not hard to notice the grain in some images.

One big tick for the HTC One is the ability to camera decent images in low light conditions. It is sensitive enough to capture 300 per cent more light and when you don’t have much light to begin with – this feature’s a handy one to have on board.

It’s also easy to edit your images, create a sequence shot and also erase unwanted people and objects from your pictures.

Sense TV is one of our favourite features of the HTC One. Essentially it means the device can also be used as a remote control for your TV. The on/off/lock keys is actually the infrared transmitter as well.

Simply select your country and choose the brand of your TV. Set up is as simple as aiming the HTC One at the TV and pressing the onscreen off button. If that action turns off your TV you’re sorted and you can start controlling your TV.

But not only do you have the ability to control the volume and change your channel you can also view the TV guide and click on the list of current shows to go to that channel so you can choose shows rather than stations.

The app also show users what’s coming up next and also gives full access to the number pad and direction keys to navigate your TVs channels and menus.

On the audio side the HTC One is outstanding. The front of the device has dual front speakers which, when it is resting on its side provides a nice crisp left and right sound for games, music and movies.

What’s helping the cause here is the addition of Beats Audio which enhances audio output whether you’re listening through headphones or through the HTC One’s excellent speakers.

The sound will surprise you with its quality and even at high volume it showed very little distortion.

The device’s speed certainly doesn’t let down the rest of the excellent features of the HTC One. Thanks to the Snapdragon 600 1.7Ghz quad-core processor the device runs quickly and smoothly.

On the screen side the display is dazzling in both its sharpness and brightness and makes pictures and movies look great and onscreen text even easier to read.

One of the few weaknesses of the device would have to be its battery life which, under heavy use, left us just short of a full day of charge.

The 2300mAh battery seemed to burn through power a bit faster when we leaned on the 4G connectivity to download content and surf the web.

We also noticed the device got a little warm – a sign that the battery is losing power faster – and with the metal rear panel it was easy to feel the heat.

But the HTC One still manages to improve on the battery performance of earlier models.

Price: On plans from Telstra, Optus, Vodafone and Virgin Mobile

Enki case can make your iPhone waterproof to 10m