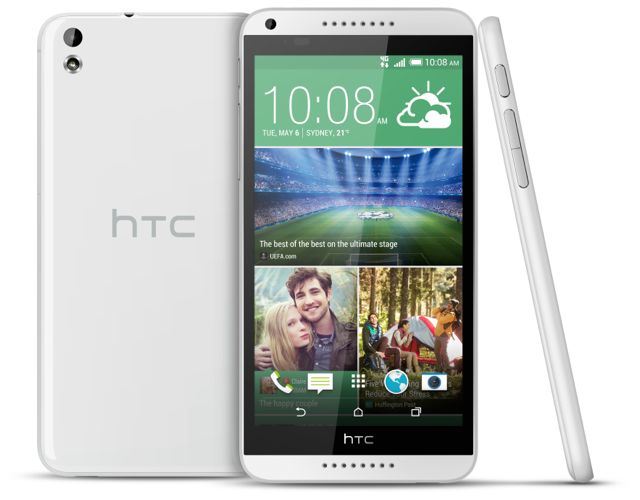 There are a lot of attractive features about the HTC Desire 816 5.5-inch smartphone but perhaps one of the best is the affordable price.

In a market where more people are looking to buy a device outright rather than pay off a device over two years, the HTC Desire 816 will win a lot of fans.

It has a 5.5-inch screen, a clean design and a 13-megapixel camera and plenty of the features also found on the device’s fancier big brother the HTC One M8.

In fact, it is the iPhone 5C to Apple’s iPhone 5S. And it’s far more affordable.

On the design front, the HTC Desire 816 might be made of plastic but it still has a solid quality feel in your hands.

This is yet another similarity to the iPhone 5C – the material the HTC 816 is made of looks very similar to what Apple used.

The buttons are all located on the left side of the device with the microUSB port on the bottom and headphone jack on top.

The right side, at first glance, looks like there’s nothing there but if you look closely you’ll see a small door that you can prise open with your fingernail to reveal the SIM card slot and microSD card slot.

We quite liked this easy access, once you get it open which, at times, can be a little fiddly. But it’s still better than having to look for a paper clip or the special tool that opens the SIM card slot.

The back has the 13-megapixel camera along with a flash. Pictures taken with the device are crisp and clear in good light but got a touch grainy in lower light even with the flash to back it up.

Bottom line is the camera is more than ample for taking photos and sharing them online.

The front camera is 5-megapixel which is pretty generous for a front-facing lens so your selfies are going to look pretty sharp.

But the most dominant feature of the HTC Desire 816 is the 5.5-inch screen which puts the device into “phablet territory”.

It doesn’t share the HTC One M8’s full high definition resolution but still quite respectable at 1280 x 720.

The obvious challenge a screen this size presents is using the device with one hand which is difficult – unless you’ve got huge hands.

It’s a pocket stretcher for men who will no doubt be attracted to the larger display.

And women – who are often incorrectly thought to not like larger screen smartphones – have the option of carrying a handbag to store it.

The HTC Desire is running Android 4.4 KitKat operating system and also has the added layer of the HTC Sense UI (user interface) which includes BlinkFeed to aggregate all of your social media feeds in one place.

Apart from the odd occasion when an app took a few seconds to open or to refresh, the user experience is a pretty speedy one.

There’s 8GB of memory onboard but microSD slot makes it easy to expand up to an extra 128GB.

Another tick has to go to the sound quality from the front facing speakers that are backed by HTC BoomSound which make the audio output good enough to enjoy out loud instead of streaming through a speaker.

In the battery department you’ve got a sealed construction so you can’t click off the back cover to get to it.

But the good thing about a large device – you can fit in a large battery. In this case the battery has a capacity of 2600mAh and we found it had plenty of staying power for a day and half of use.

Now there are some features you won’t find on the HTC Desire 816 including NFC (near field communication) and that full high definition.

But another thing you won’t find is an expensive price tag.

The HTC Desire 816 should be appreciated for what it’s got rather than what it lacks at this price.

There is still plenty of bang for your buck and all of the multimedia and connectivity features that will satisfy most users.

At the affordable price of $399 the HTC Desire 816 is one of the largest and most capable smartphones in its class.