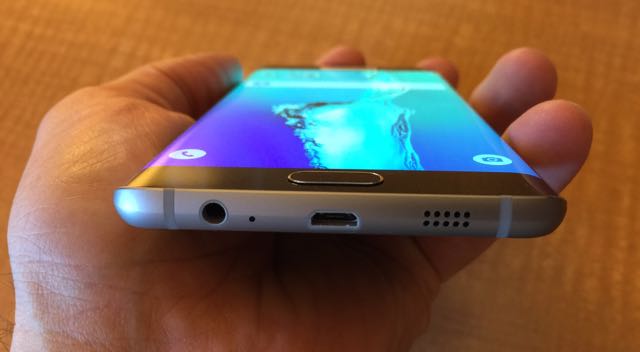 The first word that comes to mind when you’re using the Samsung’s new Galaxy S6 edge+ and the Note5 is power. The new devices have raised the bar for smartphones in terms of design and performance.

Tech Guide was in New York for the launch of the S6 edge+ and Note5 smartphones and we had a chance to get up close to the devices for a hands-on review.

Samsung has adopted a “go big or go home” attitude with these devices.

With Apple’s launch of its latest iPhones rumoured to be less less than a month away, Samsung needed a strong entry here – and that’s exactly what it has delivered with the S6 edge+ and the Note5.

Design-wise the devices are striking with a premium look and feel.

Adding to the eye-catching look are the curves.

On the S6 edge+ the curves are on the screen and offer screen experience that makes it look like there’s no boundary thanks to the rounded edges on each side.

It also feels remarkably thin in your hand at just 6.9mm thick.

It’s a larger version of the S6 edge released in March but with additional screen real estate and extra edge shortcuts for your favourite apps and contacts.

The curved edge is also handy for seeing the time when the device is locked as well as for notifications which can be changed in the settings.

The Note5 might have a regular screen but there are also curves to be found on the rear panel.

These curves make the device feel even better in your hand and also more comfortable to use with one hand.

The second you turn on or unlock the phones you’re dazzled by the brightness and clarity of the 5.7-inch Super AMOLED screen.

With a quad HD resolution of 2560 x 1440 – that’s more pixels that you’ll find on the full high definition TV in your lounge room – apps, pictures, movies and web pages look so sharp they might have to include a Band-Aid in the box.

And despite having a larger screen than the iPhone 6 Plus’s 5.5-inch screen, the Galaxy S6 edge+ and Note5 are actually smaller.

The other thing you’ll notice immediately is the speed of the Galaxy S6 edge+ and the Note5.

Apps open instantly and the camera is ready to go in less than a second.

The camera – both devices have 16-magepixel resolution – take excellent photographs and find the focus in their subjects quickly.

Throw in OIS (optical image stabilisation) and you’re going to have a sharp photo every time.

The Note5’s new S Pen is a lot better than the previous model.

There are shortcuts either from the home screen or the Air Command menu to open a new blank page so you can write notes or draw pictures.

It was so responsive it is just as fast and accurate as using a real pen in a real piece of paper. But the difference is you can’t email that written note or picture.

Samsung’s Note5 is aimed at the power mobile user – someone who not only wants a big screen to enjoy their content but the tools to take notes, capture and annotate websites, sign documents and write on the screen even when it is locked.

The Galaxy S6 edge+ screen, with its dual curved edges, looks even better in this larger size.

Users who want to enjoy their content on a screen that seemingly has no frame will gravitate towards this device.

One thing both devices are lacking though is a microSD card slot which would have allowed users to expand the memory.

They are also sealed devices – like the iPhones and the Galaxy S6 and S6 edge – which means there is no way to access the battery.

That was a point of difference that resonated with Samsung users because it was a feature Apple never had.

But now Samsung has gone down the same path in this area they’re going to have to take on Apple with brute force.

And the Samsung Galaxy S6 edge+ and Note5 have the power to offer just that.