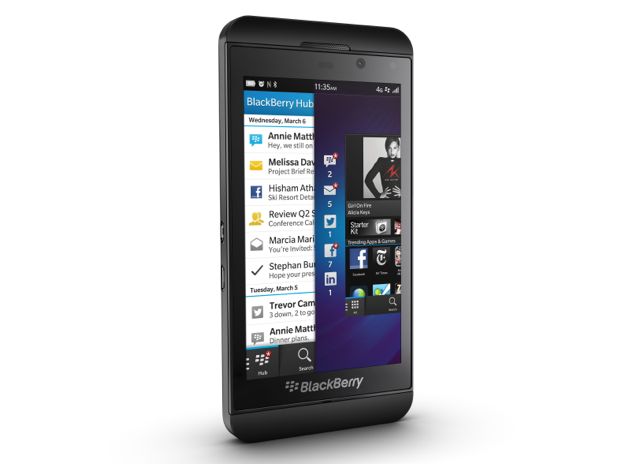 BlackBerry’s highly anticipated Z10 smartphone is perhaps the most important product the company has released.

After a series of touchscreen device failures and an embarrassing and forgettable “Wake Up. Be Bold” ad campaign – BlackBerry had a lot riding on the Z10 and the new BB10 software that powers it.

The good news is this 4G device is actually an impressive piece of hardware.

And the all-new operating system delivers enough of the BlackBerry experience dedicated users have come to expect and with some new features added in.

If you’re a current BlackBerry user tempted to ride off with an Android device or an iPhone, the Z10 deserves your consideration.

Since the iPhone came into the market and turned the smartphone industry on its head in 2007, BlackBerry has tried and failed with touchscreen devices. Does anyone remember the Storm? No? You’re not the only one.

But, to the company’s credit, it has stuck to its guns and, despite losing significant market share to iPhone and Android, has made a comeback of sorts with the Z10.

It has finally made a touchscreen device worthy of its competition.

One can only imagine the sort of market share BlackBerry would have today if it released hardware of this quality four years ago.

Pound for pound, the Z10 is finally in the same ballpark as the iPhone and top-shelf Android smartphones when it comes to specs and performance.

It has curved top and bottom edges and feels well built and solid in your hand.

The biggest new feature of the BlackBerry Z10 is the new BB10 operating system which is controlled by gestures – remember there is no home key or back key on the device.

So as a result users can sweep their finger in from the edges of the screen to navigate the apps and features.

And of course there are apps as well – lots of them.

BlackBerry (that’s the company’s name now – they changed it from Research In Motion) says more than 70,000 apps have been developed for the platform including all of your favourite games and social media applications.

One of the strengths of the Z10 is the fact that a number of apps can run at once and, with the gesture control, it’s easy to move in and out of them.

The times when you do move out of the apps is to access the Hub which, as its name suggests, is your main touch point that connects you to the outside world.

The downside of this though is that there are constant notifications whether it’s the latest email, SMS, tweet or Facebook message.

But you are able to see a breakdown of notifications that show you exactly how many emails, SMS messages and Facebook messages you have waiting for you.

And because you don’t have to close down any app, it’s very easy to move in and out of what you’re doing to access the Hub and come right back to where you left off.

These gestures are probably the biggest learning curve for anyone who decides to take on the Z10 – whether they are coming from an older BlackBerry or another operating system.

If you’ve been a loyal BlackBerry user who is used to navigating through the apps on the screen with the track pad, it’s as much of a jump for them to learn the ins and outs of the Z10 as it would be to get used to Android or the iPhone’s iOS.

But what will attract the existing BlackBerry user to the Z10, apart from brand loyalty, is the look and feel of the system which retains much of the BlackBerry DNA, the same email reliability and corporate security and the keyboard.

Keyboard? The Z10 doesn’t have a physical keyboard – the excellent feature that kept users loyal to BlackBerry in the past – but it does have one of the best virtual keyboards we’ve used on a touchscreen device.

Users who are worried they’ll have separation anxiety from the BlackBerry’s traditional physical keyboard if they take on the Z10 can put their mind at ease.

Typing on the Z10 is quick and easy because it can learn from you and gets to know the words you use along with your writing style.

This built-in intelligence can often predict the next word you’re going to type and also complete the word you’re typing.

It identifies these words and displays them above the key that matches the first letter. For example, the word “the” would float above the letter T and to accept this as your next work, simply sweep up from the key and the word is in your sentence.

As a result we were able to complete sentences quite quickly. It also made typing with one hand a snap as well.

There is an 8-megapixel camera rear camera as well as a 2-megapixel front facing camera.

The quality of the BlackBerry Z10 camera is not as good as those found on the iPhone and Samsung smartphones but it did deliver a cool feature that can help get the best picture.

It’s called Time Shift mode which is captures images milliseconds before and after you hit the capture key.

If someone is not smiling or they have blinked, you can select each face and scroll back or forward in time to catch them at their best.

One thing BlackBerry users have always been conscious of is the all-important work-life balance.

With the Z10 it is easy to separate your work and private life on the device and easily move between the profiles and also combine them at the appropriate time.

Things like apps, emails and documents can be sorted to easily distinguish them for work or private use.

Also on board the Z10 is NFC (near field communication) which allows for one-touch content sharing and one-touch pairing with headphones and speakers.

There is no argument the Z10 is an impressive piece of hardware with a 1.5Ghz dual core processor, 2GB of RAM and 16GB of internal memory.

There’s also a microSD card slot if users want to expand that memory even further.

Also on board are a microUSB port and a Micro HDMI connection to link your device to a TV or a projector.

With specs like that it means the device is fast. Apps, emails, documents and the camera open quickly and navigating through the system with gestures is quick, easy and smooth.

The Z10 has an 1800mAh removable battery that can last a full work day. If we had a full charge at 8am we could make it to 6pm or 7pm that night with heavy use.

There were also occasions when we were running on fumes as early as 5pm.

The BlackBerry Z10 is an impressive device that has finally got the touchscreen right and the operating system to go with it.

The device will be attractive to current BlackBerry users but will be battling to win customers away from more popular platforms like iOS and Android.

But on its own the Z10 has a lot to offer whether you’re a corporate user or a customer new to the smartphone.

The hardware, feature set and excellent virtual keyboard make the Z10 worth your consideration.

It’s just a shame BlackBerry didn’t come up with this device years ago.

Price: Available on contract with Telstra and Optus.