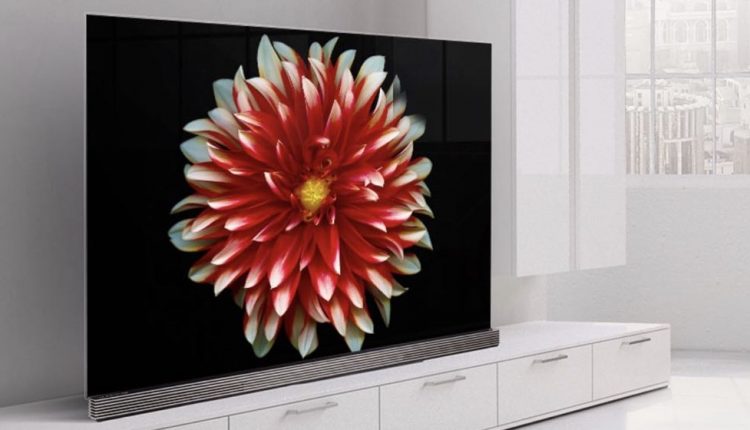 There aren’t many TVs that you enjoy looking at even when they’re turned off. LG’s G7 OLED falls in this category because of its stunning design and a screen so thin you have to see it to believe it.

The first thing you’ll notice is the impossibly thin screen. It’s just 2.57mm thick and bonded to a sheet of glass.

To get an idea how thin that is, squeeze three credit cards together between your fingers.

The reason it can be so thin is the fact that OLED (organic light emitting diode) is a self-illuminating material and therefore does not require a backlight.

So naturally, LG went to town to make it as thin as they could and boy, did they succeed.

But the superior design doesn’t end with the screen. 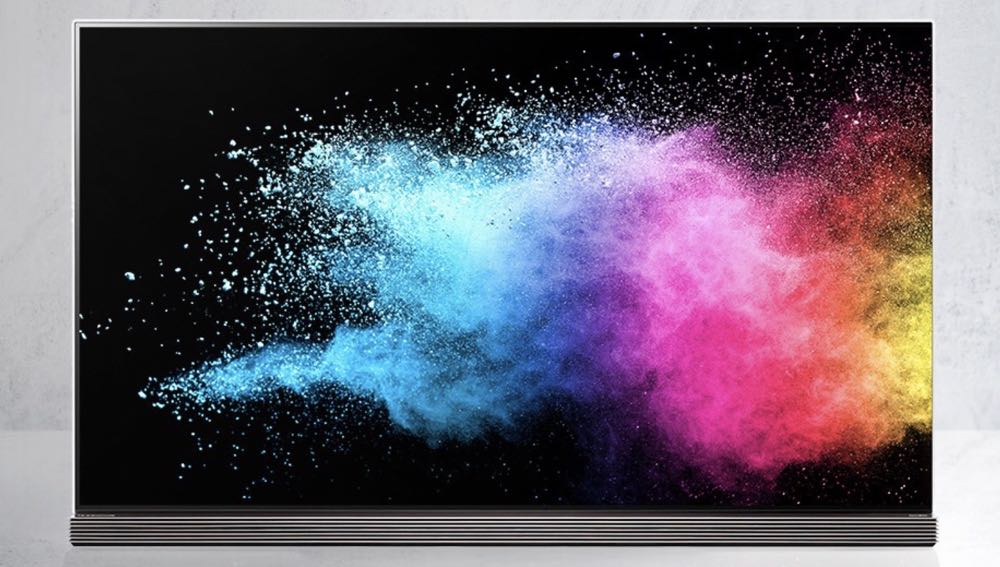 The 65-inch display is joined to a stylish base that also doubles as the speakers.

Inside the base is where all the TV circuitry and inputs are cleverly located.

This is all extremely impressive, and we haven’t even turned the TV on yet.

The picture quality is evident the moment the TV turns on.

OLED provides the blackest blacks that can be achieved on a TV. And from this comes more accurate colour. As a matter of fact, it can display more than 1 billion colours. 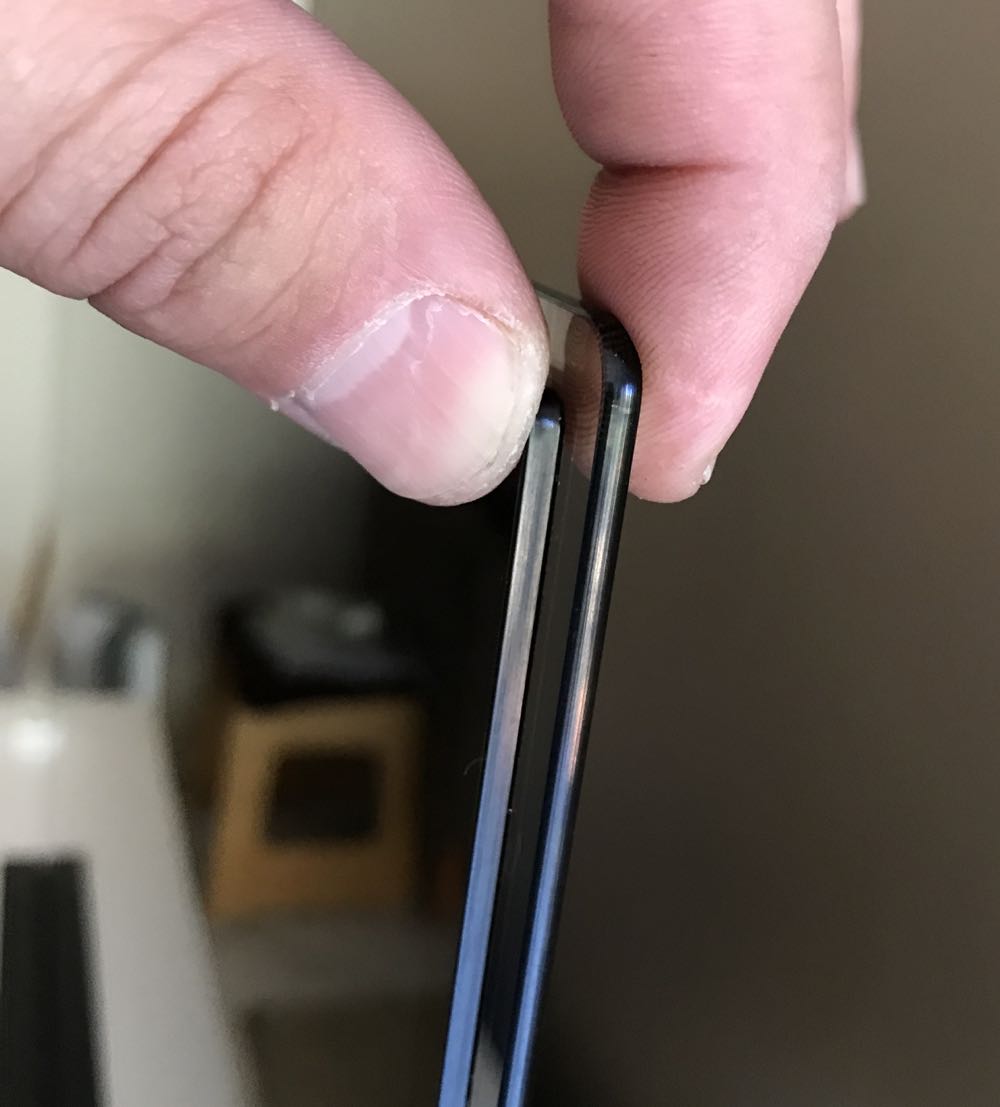 Also under the hood is Active HDR (high dynamic range) combined with Dolby Vision technology to get even more out of the colours to deliver an unmatched home entertainment experience.

When viewing 4K HDR content, the LG G7 hits you between the eyes with its incredible range of colours, accuracy, warmth and sharpness.

And when movies are released with Dolby Vision HDR, it’s going to get even better.

Even watching free to air high definition television we noticed a quality we had never seen before.

If it’s cinema quality viewing you’re after, then you can’t go past this extraordinary television. 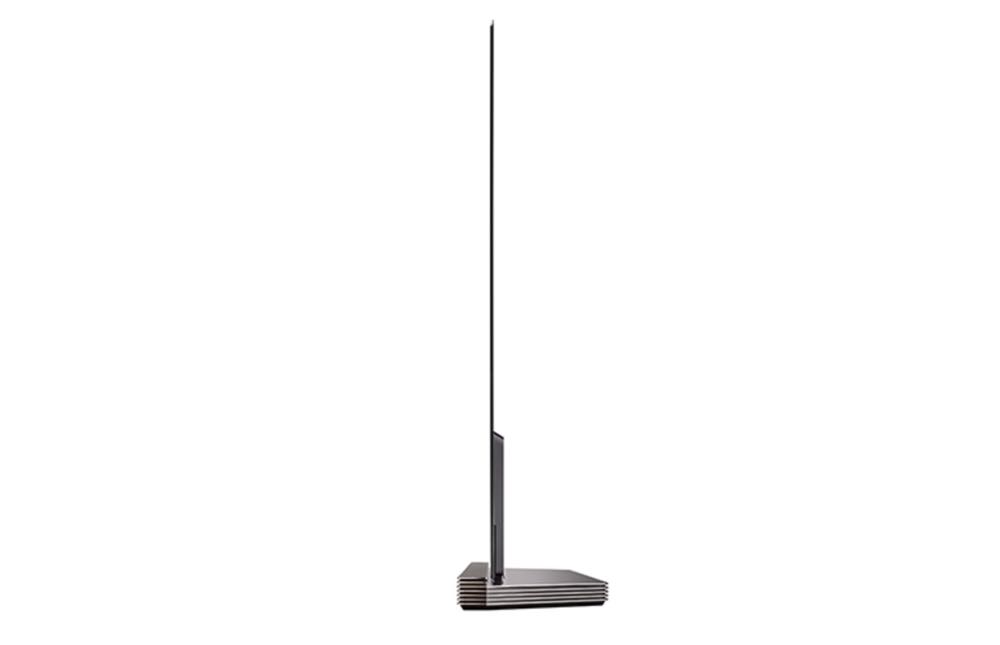 It has a response time of less than 1ms so it’s not only the sharpest, boldest picture you will see but also the smoothest.

We put this to the test watching plenty of sport and motion judder was undetectable.

But not only does it look great, it sounds great as well.

And that’s all thanks to the built-in speakers in the LG G7’s base which also happened to offer 60W Dolby Atmos audio.

There is already plenty of Dolby Atmos content around, including movies on disc and now, for the first time, on Netflix. 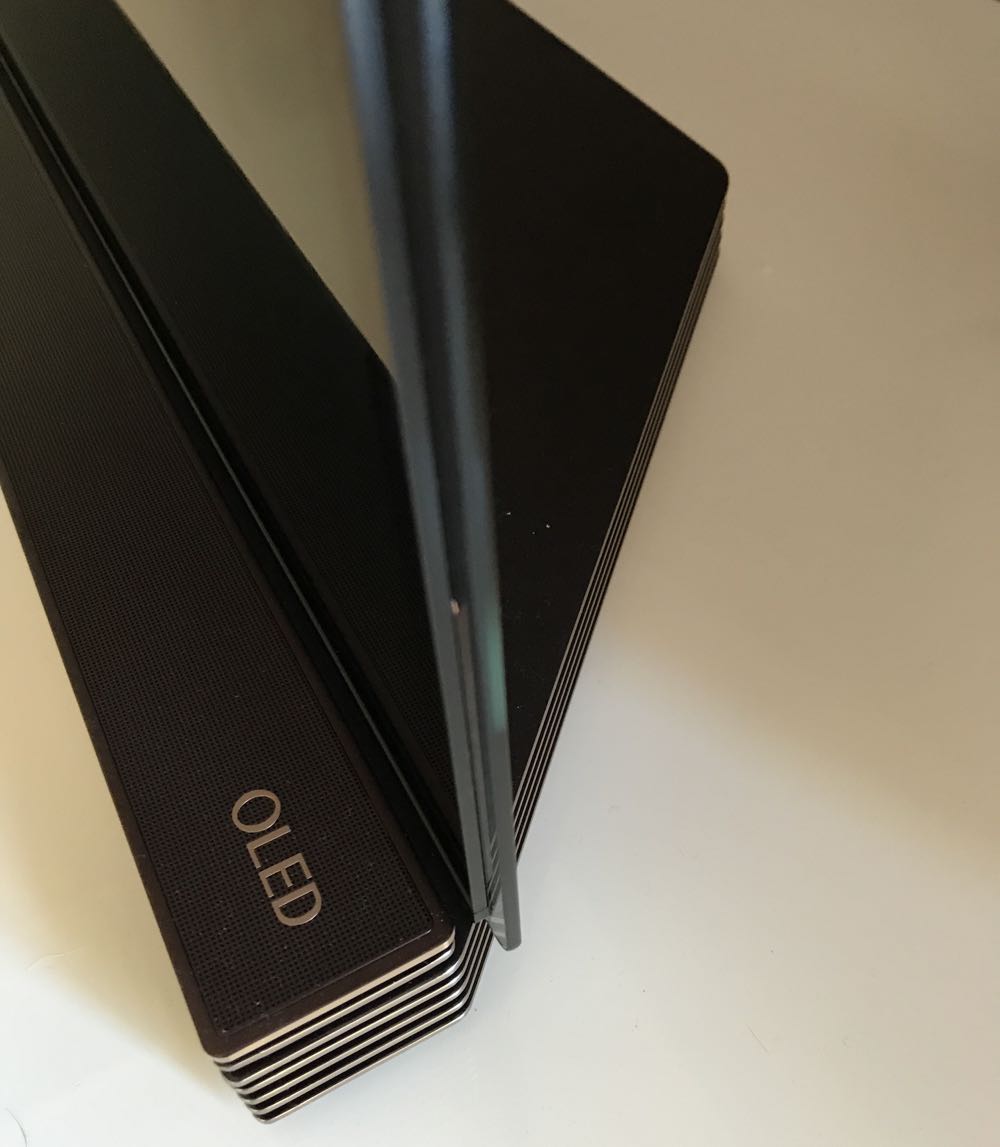 If you’re a Netflix customer you can watch movies in 4K HDR and now with Dolby Atmos which gives you three-dimensional sound from around you and above you.

For our review, we watched the film Okja – the first film on Netflix to feature a Dolby Atmos soundtrack. And it was incredible.

It was hard to believe that we were hearing this sound from the small base of this remarkably thin television.

There were sounds surrounding us and descending on us.

We watched Logan and John Wick on 4K Ultra HD disc and as we expected the picture looked stunning.

The black levels were remarkable but there was enough contrast to make out detail when needed. At the same time colours shone brightly right next to a darker section of the screen.

The base of the TV is you will find four HDMI inputs as well as one USB 3.0 and two USB 2.0 ports.

There is also digital audio out (optical), an Ethernet port and a headphone jack.

They are located at the rear of the base where cables can easily be arranged down into an entertainment unit without seeing any clutter.

The LG G7 can also be mounted with the base hinging back behind the screen so we can be attached to the wall. 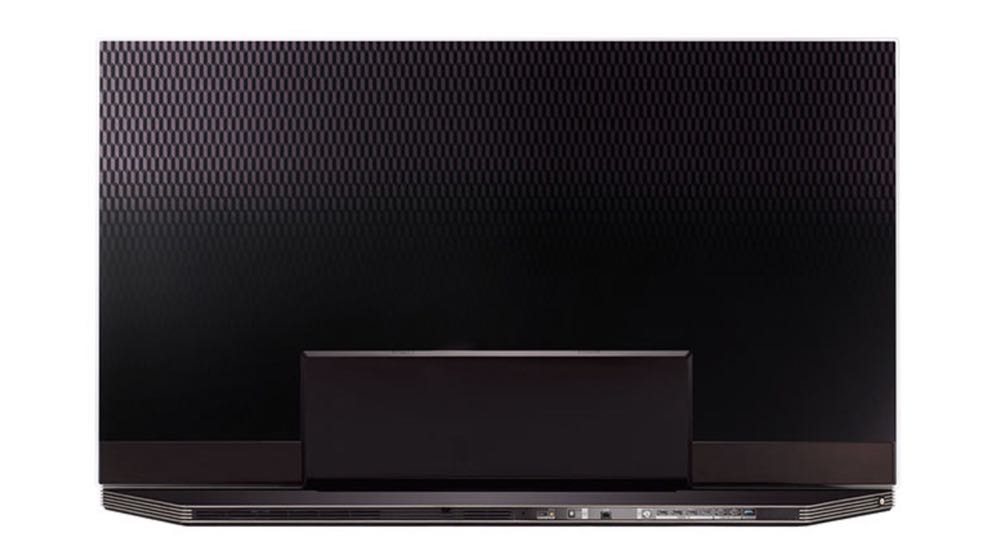 And you still get the same picture and sound quality with the speakers adjusting to this mounted position.

The TV is running LG’s webOS 3.5 operating system which gives you easy access to the TV’s features as well as streamed content from services including Netflix, Amazon a YouTube.

It also comes with two Magic remotes which offers on-screen cursors to easily navigate the features and menus on screen so it’s as easy as pointing and clicking like you would on your computer with a mouse to find what you’re looking for.

The LG G7 is running a quad-core processor so the speed and performance is impressive and there is also Wi-Fi onboard to connect to your home broadband.

One of the only downsides of the TV was the location of the ports at the rear of the base. 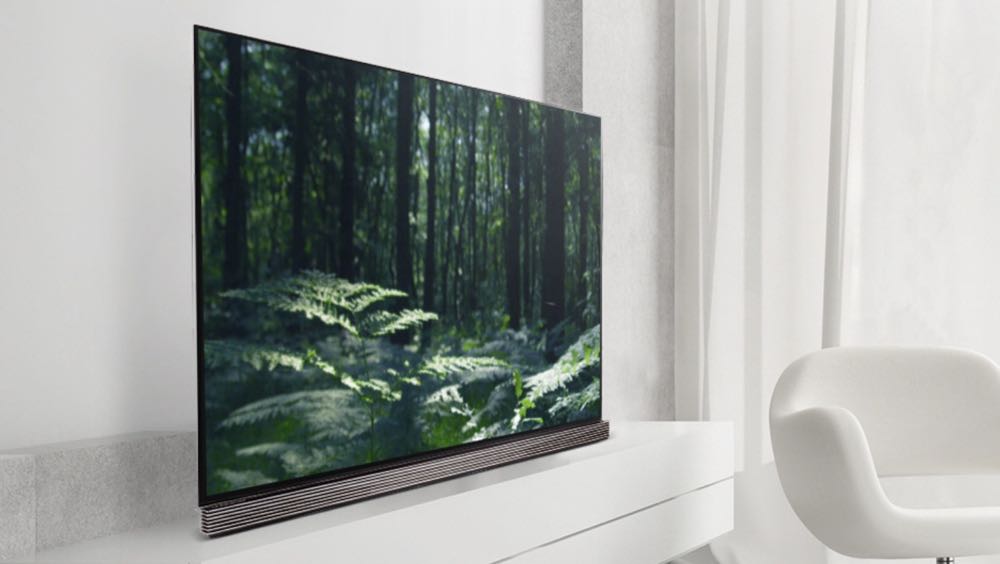 There would be no other place to locate them but it just meant we had to reach even further back to connect our sources or our USB drives.

On a regular TV, these inputs are located right on the back of the screen. But this is not a regular TV. Not much of an issue but we struggled to find anything wrong with the TV.

The LG G7 ticks all the boxes in terms of innovation, technology, design and quality and provides you with not only a stunning looking television but an unmatched TV viewing experience in your home. If there is a better TV on the market, we haven’t seen it.

PROS: Impossibly thin screen, stunning design, brilliant black levels, more than a billion amazing colours, Dolby Vision HDR, Dolby Atmos sound. CONS: Outputs harder to reach than a regular TV VERDICT: The LG G7 ticks all the boxes in terms of innovation, technology, design and quality and provides you with not only a stunning looking television but an unmatched TV viewing experience in your home. If there is a better TV on the market, we haven't seen it.