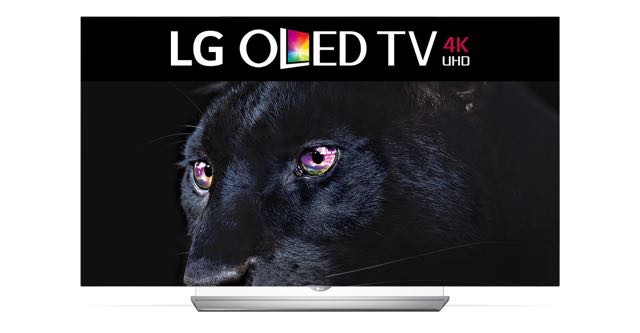 LG’s range of 4K OLED TVs has been a huge hit but the line-up just received a boost with the launch of the impressive EF950T series that has made an already truly excellent TV even better.

It is the first flat OLED TV the company has released and the first OLED with HDR (high dynamic range) onboard.

OLED (organic light emitting diode) has been LG’s trump card in the competitive TV market with the technology providing a truly stunning picture.

Blacker blacks, bright and accurate colours and amazing contrast that adds up to a picture that you have to see in person to appreciate.

But before we get into our review of the LG 65-inch EF950T – we want to explain what OLED is and why it can produce incredible picture quality. 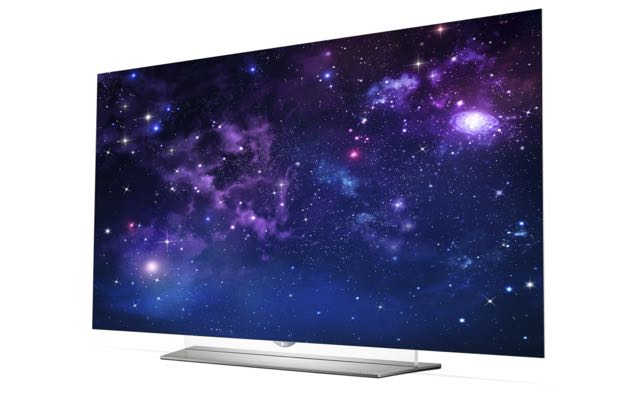 In a nutshell, OLED is a self-illuminating material which means there is no need for a backlight so TVs can be a lot thinner than a regular LED TV.

And without that backlight, the OLED pixels are either completely on or completely off so black levels are absolutely, positively black as black can be.

A regular LED TV’s pixel, with a backlight, can’t quite block out all of that backlight when its turned off to represent those dark areas of a scene. This is called light leakage.

The blacks are OK but not in the same league as the blacks that this OLED can produce. 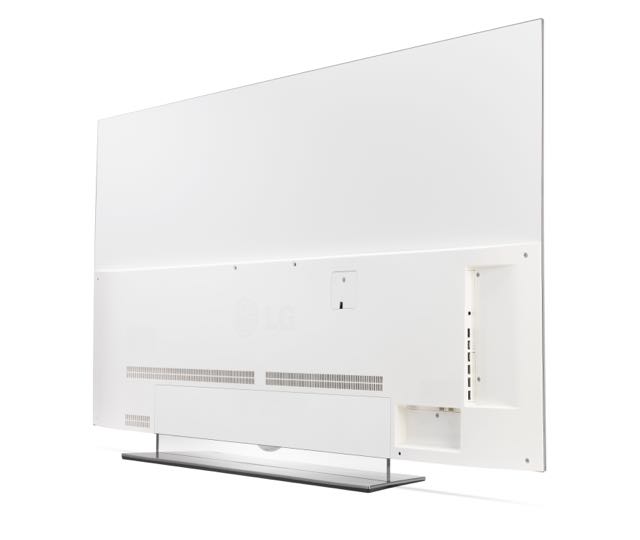 Because there is no issue with light leakage on an OLED TV, viewers can see an additional 20 per cent of colour at the darker end of the brightness scale that’s usually lost on a regular LED screen.

OK, now you’re up with the basics and advantages of OLED – let’s get on with the review EF950T 4K UHD OLED TV.

On the design side – it looks much like the previous model but with one major difference – it’s flat, not curved.

The curved LG 4K OLED was a superb TV but not every customer is a fan of a curved screen – which is still on sale. 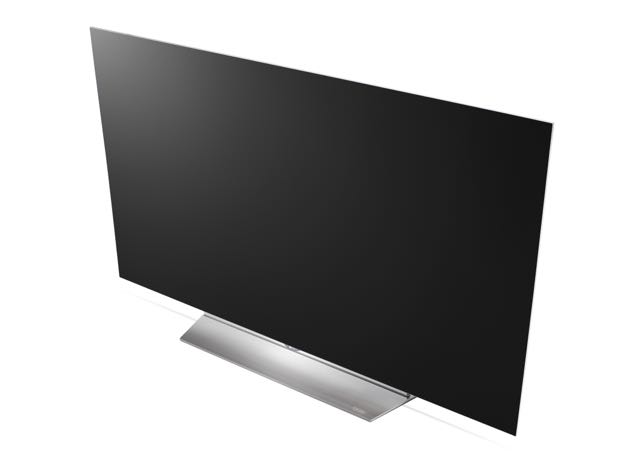 This new flat screen not only has all of the OLED goodness of LG’s curved model but there’s a little bit extra with the new HDR (high dynamic range) feature – but more on that later.

The TV has an almost invisible bezel and looks sleek and modern.

It has 4K ultra high definition resolution – which is four times the number of pixels of a full HD TV – at a resolution of 3840 x 2160. That’s more than 8.3 million pixels.

This resolution is impressive on most TVs but on an OLED it’s even better and looks sharp enough to cut your finger.

And you’re also getting flawless black and screen that can display more than a billion colours. 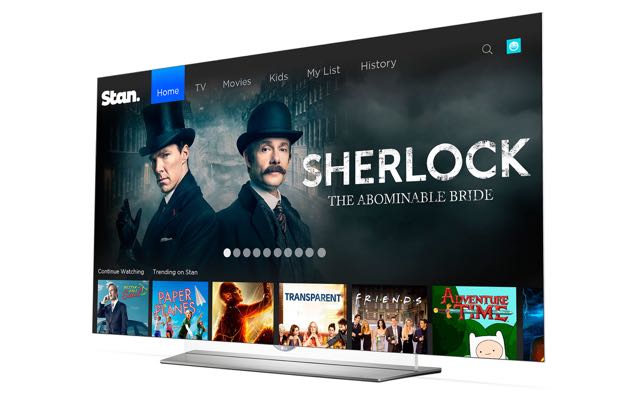 The newest feature on the LG EF950T is HDR and this actually makes the picture quality even better.

When viewing HDR content – the TV now has the capability to display it in all its glory.

HDR – high dynamic range – makes the levels between the blackest blacks and the whitest whites even better so you can see a richer, more detailed image on the screen.

For our review we look at some regular and 4Kcontent along with some 4K HDR content.

HDR is particularly useful when viewing scenes with various areas of brightness and darkness.

For example, a HDR clip filmed inside and looking out into the sunshine means you’ll either see the detail inside and the outside will be washed out or you’ll see the objects outside in brightness clearly and the inside will be all black. 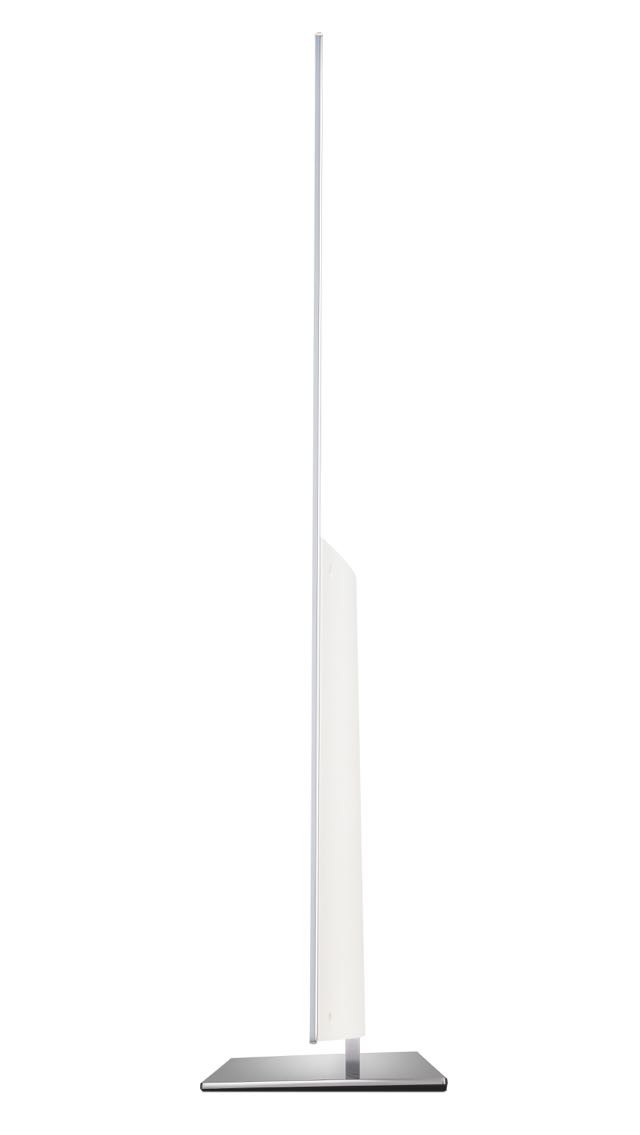 HDR provides the best of both worlds in this situation with detail inside the dark areas and detail outside in the sunlit brightness.

So now what you can see in your content is a lot more detail, textures and even the lustre of smooth shiny objects.

Other scenes showed bright objects placed right in front or next to dark areas with the LG flatscreen 4K OLED screen showing as much details on the bright objects as there was on the darker objects so you can just imagine how vivid the darker scenes in a movie would appear.

In fact, when the TV detects HDR content – a notification appears in the top right hand side of the screen that HDR has been turned on to let the viewer know.

So if you’re worried about not having enough HDR content – you can stop worrying right now.
What about 4K content? There is now a lot more of it now and even more coming.

We watched some shows in glorious 4K on Netflix including the new Chelsea Does reality program and the new comedy Love.

We even watched a bunch of 4K videos on YouTube.

The added detail is clearly noticeable even for the untrained eye. The improvement in picture quality is like a short-sighted person seeing through a pair of prescription glasses for the first time.

You’re going to notice a lot more detail than ever before. 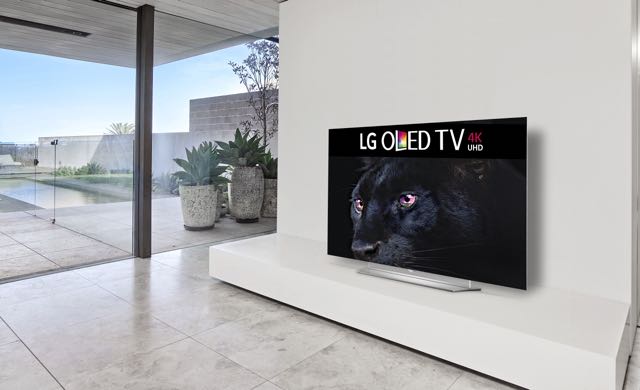 And even when you’re not watching 4K content – like a Blu-ray or free to air TV – the LG EF950T 4K OLED TV will be able to bring it up to near 4K quality with the 6-step upscaling technology.

Another advantage of OLED, apart from the head-turning picture quality, is Enhanced Motion Clarity.

This feature means fast moving objects on the screen in action movies and sports matches are smoothed out there is virtually no motion blur.

The LG OLED’s response time is 0.002 milliseconds – that’s the time it takes to turn a pixel a pixel on, off and on again. 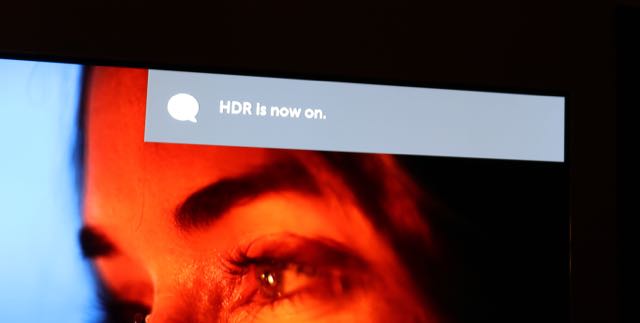 The LG OLED was the smoothest image we’ve ever seen.

We watched action movies like Terminator Genysis, Gravity and Godzilla along with some sport and the motion judder was virtually non-existent.

On the audio side, the LG OLED TV can also hold its own thanks to the built-in Harman Kardon built-in speakers that sound remarkable considering the svelte shape of the TV.

Our review TV came with a sound bar which is a great add-on of you wanted even better sound quality and a subwoofer but we disconnected this to hear the sound that came out o the TV and we were pleasantly surprised that the quality was there.

The last thing you want is a great picture with a tinny, below average sound. Fortunately, the LG TV aims up in the audio department as well. 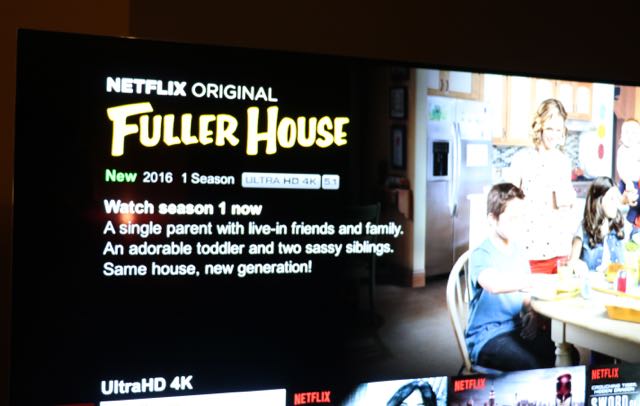 Under the hood is a quad core processor so the TV is quite responsive when moving between features, changing channels and navigating the menu.

Another excellent feature of the LG flat 4K OLED TV is the webOS 2 operating system. It’s really easy to navigate and puts all of your content, your sources and settings right at your fingertips.

What also helps this is the magic remote which has both a scroll wheel and a cursor that you can move around the screen like a mouse.

Was there anything we didn’t like about the TV? Not really. Some may say the 65-inch models is expensive at $8,999 which is thousands of dollars more than other 65-inch TVs on the market.

Is it worth the extra money? Absolutely.

It’s like paying extra to drive a Mercedes Benz instead of a Hyundai. That new technology and extra quality and luxury costs money.

LG has once again found the right formula with its latest EF950T OLED TV.

It delivers on every front on every front and has the design, technology and stunning picture quality that makes it stand head and shoulders above any other TV.

This is still the best TV money can buy.