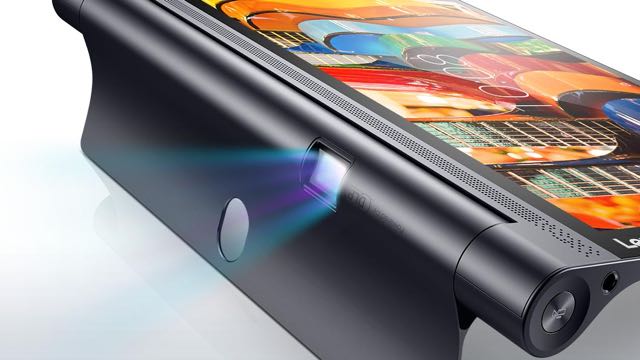 When it comes to tablets Lenovo has always thought outside the square and its latest Yoga Tablet 3 Pro is another example of that approach with some unique features and a unique user experience.

The device has a 10.1-inch IPS (in-plane switching) quad HD screen with a resolution of 2560 x 1600 so it looks impressive whether you’re watching a movie, browsing the web or viewing pictures and videos.

But that’s not the only way you can enjoy your content.

The Yoga Tablet 3 Pro has a projector built in to the barrel than runs up the side of the screen. 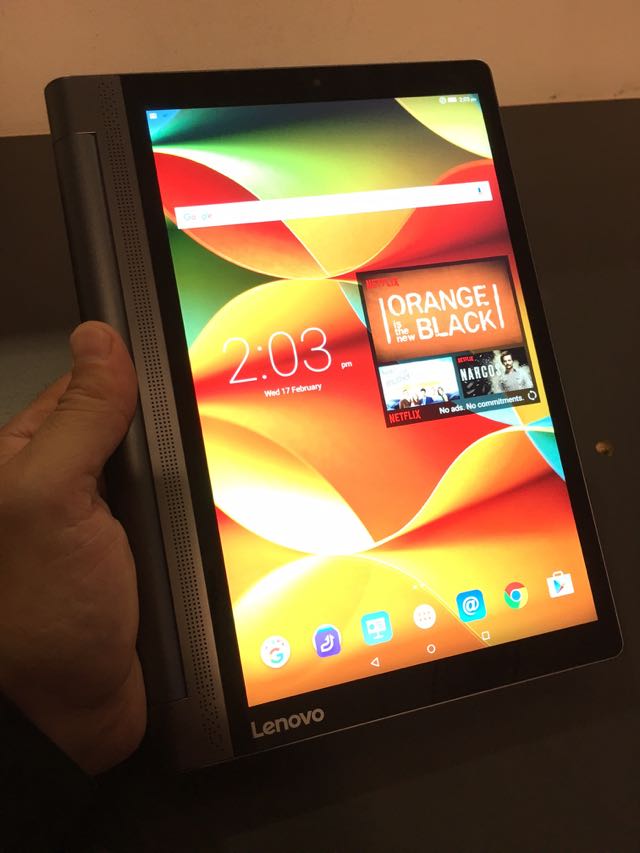 And because it’s on this location, the built-in stand makes it even easier to position the tablet and also aim the projector for comfortable viewing.

The projector can create an image up to 70-inches in size on a wall or the ceiling with a brightness of 50 lumens.

It has auto focus and even has automatic keystone correction which means that whatever angle the image hits the wall it keeps the image in a rectangular shape. 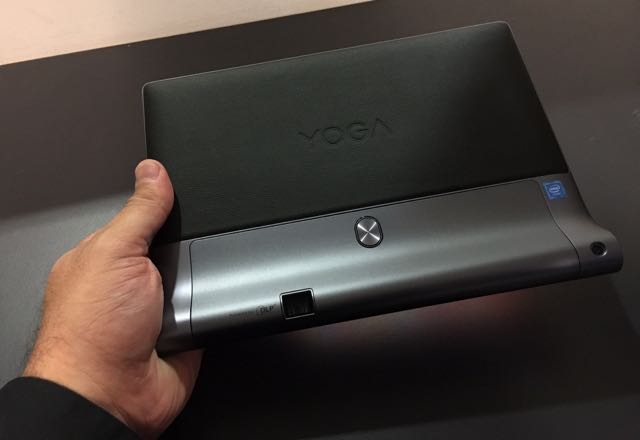 We were able to watch whatever was on the tablet’s screen on a grander scale through the projector so it’s ideal if you are making a presentation, want to surf the web in a bigger way and when watching your favourite content or streaming video services.

And we were pleasantly surprised with the quality of the picture through the tablet’s DLP projector. 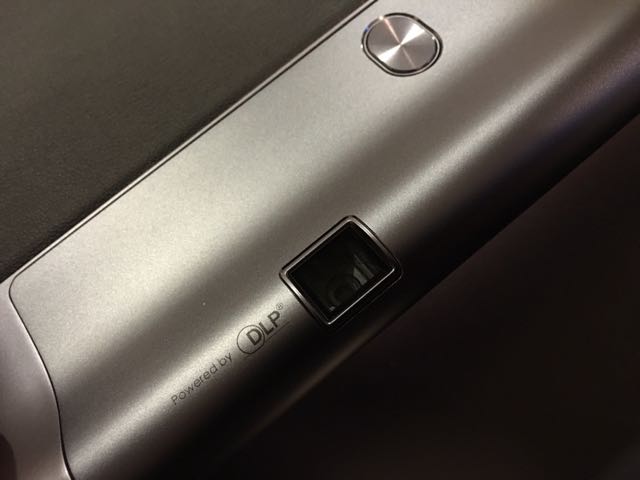 We were also impressed by sound quality from the four JBL speakers built in below the screen.

And it even has Dolby Atmos so when watching a movie, you’re going to hear sounds coming from all around you. 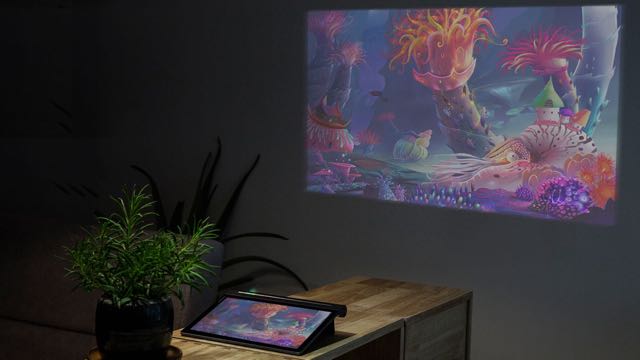 The Yoga Tablet 3 also has its trademark built-in stand which easily allows the device to be positioned for typing, for viewing, for holding and it can even be hung.

Under the hood, the Yoga Tablet 3 Pro has an Intel Atom x5-Z8500 processor with 2GB RAM and 32GB of memory with a microSD card slot to expand that memory even further.

On the design side the Lenovo Yoga Tablet 3 Pro is a slick unit with a faux-leather finish on the back panel.

The Yoga 3 tablet is running Android 5.1 Lollipop and has some extra Lenovo apps to make it easier to organise and share your content.

There’s also a McAfee LiveSafe security software so you have peace of mind when loading new apps and downloading content. 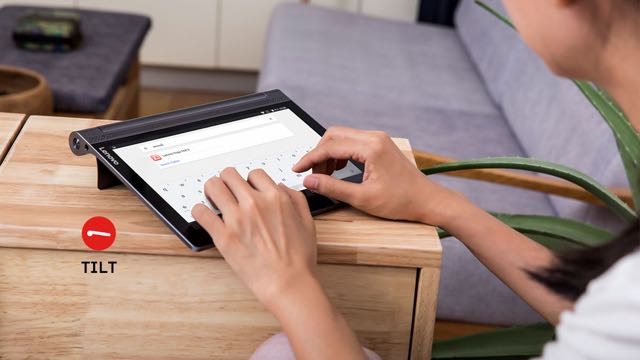 A favourite feature of ours was AnyPen technology which allows you to use pens and other similar shaped objects to navigate, write and draw on the screen for added convenience – or when your hands are dirty.

The only thing users might not like is the barrel that contains the battery, the projector and the rear 13-megapixel camera. 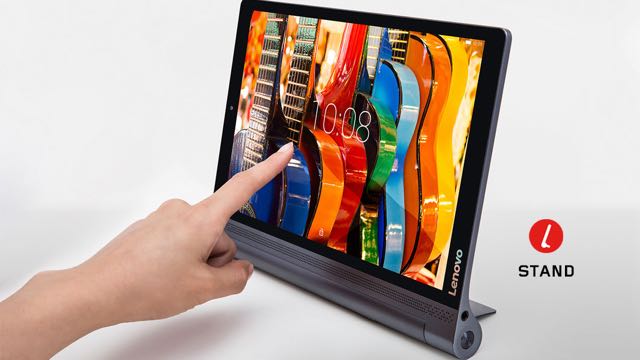 The shape it gives the tablet means it takes up a little more room in your bag and doesn’t store as easily as other regular tablets.

But that shape also provides all of those added features – especially the projector – and if customers want that feature then they will understand it’s a small price to pay. 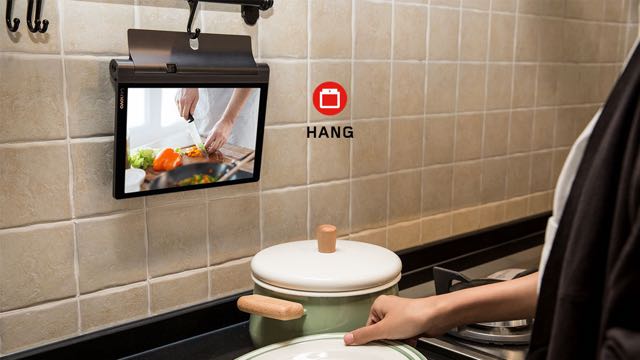 It also has no SIM card slot so you need a wi-fi network to connect to the internet. It also doesn’t have NFC (near field communication).

On the battery side, the Lenovo Yoga Tablet 3 Pro will power on for up to 18 hours. 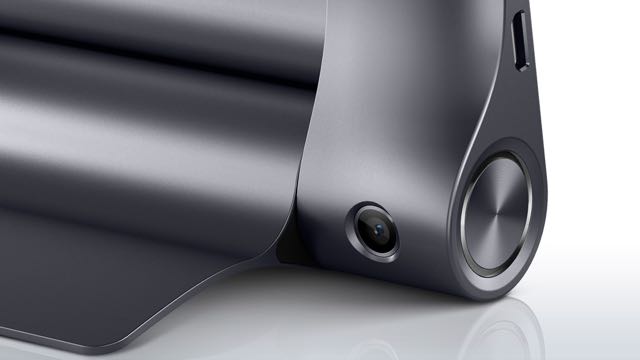 Remember that barrel – also contains a larger battery which gives the device one of the best battery performances you’ll find on a tablet.

The Lenovo Yoga Tablet 3 Pro is a unique device that offers an experience like no other with the versatility of a built-in projector to take your content beyond the device.

And the built-in Yoga stand that means the tablet can be positioned without the need for a separate case is yet another example of Lenovo putting the customer’s needs first.