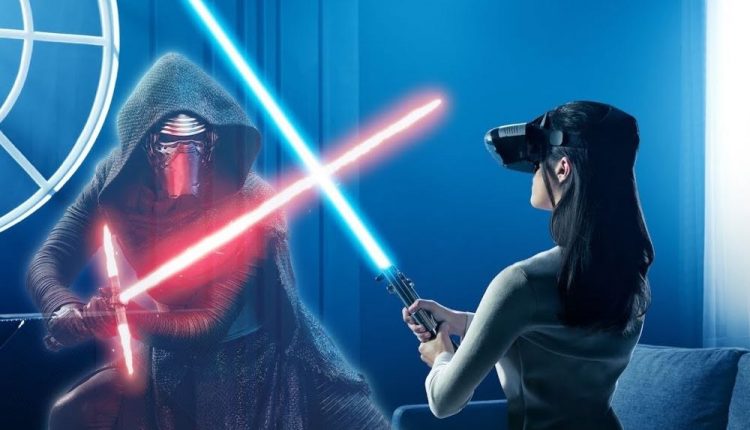 There’s isn’t a true Star Wars fan around who hasn’t once imagined wielding a lightsabre and using the Force. Thanks to the new Lenovo Jedi Challenges – it has turned that imagination to reality – augmented reality to be precise.

Jedi Challenges literally puts a lightsabre in your hands and pits you against Darth Maul, Kylo Ren, Darth Vader and others.

And not only that you can play Holochess – on the same board we first saw aboard the Millennium Falcon in the original 1977 Star Wars film – you can also direct troops in massive ground battles.

And it all comes through the Lenovo Mirage AR headset which places your opponents in your surroundings.

It’s powered through the Jedi Challenges app which runs on your smartphone which is inserted into the headset using a special tray that can accommodate most late model handsets.

We also understand that the Jedi Challenges app will be updated when the new Star Wars film The Last Jedi is released in cinemas.

One of the additions to the game will be an all-new opponent from the film. Can’t wait for that!

For our review, we used the iPhone 8 Plus but the system only uses a section of the phone’s display so you’re getting a consistent experience regardless of the size and brand of your smartphone. 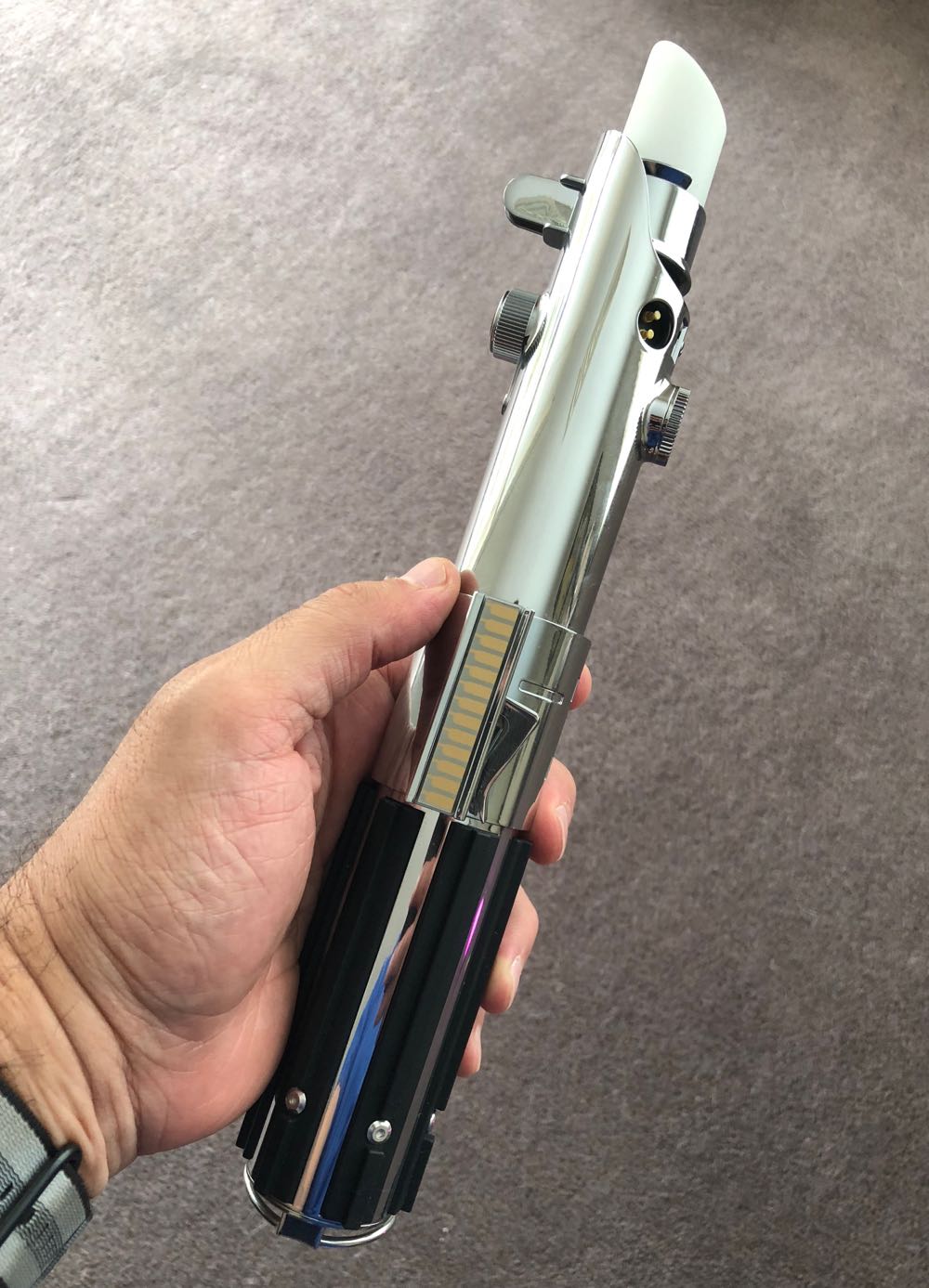 It is impressively detailed and accurate and, speaking as Star Wars collector, it’s as good as the many replicas I’ve seen and bought over the years that cost more than the Jedi Challenges $399 pricetag.

So that’s a big tick from me right there – and I haven’t even turned it on yet. 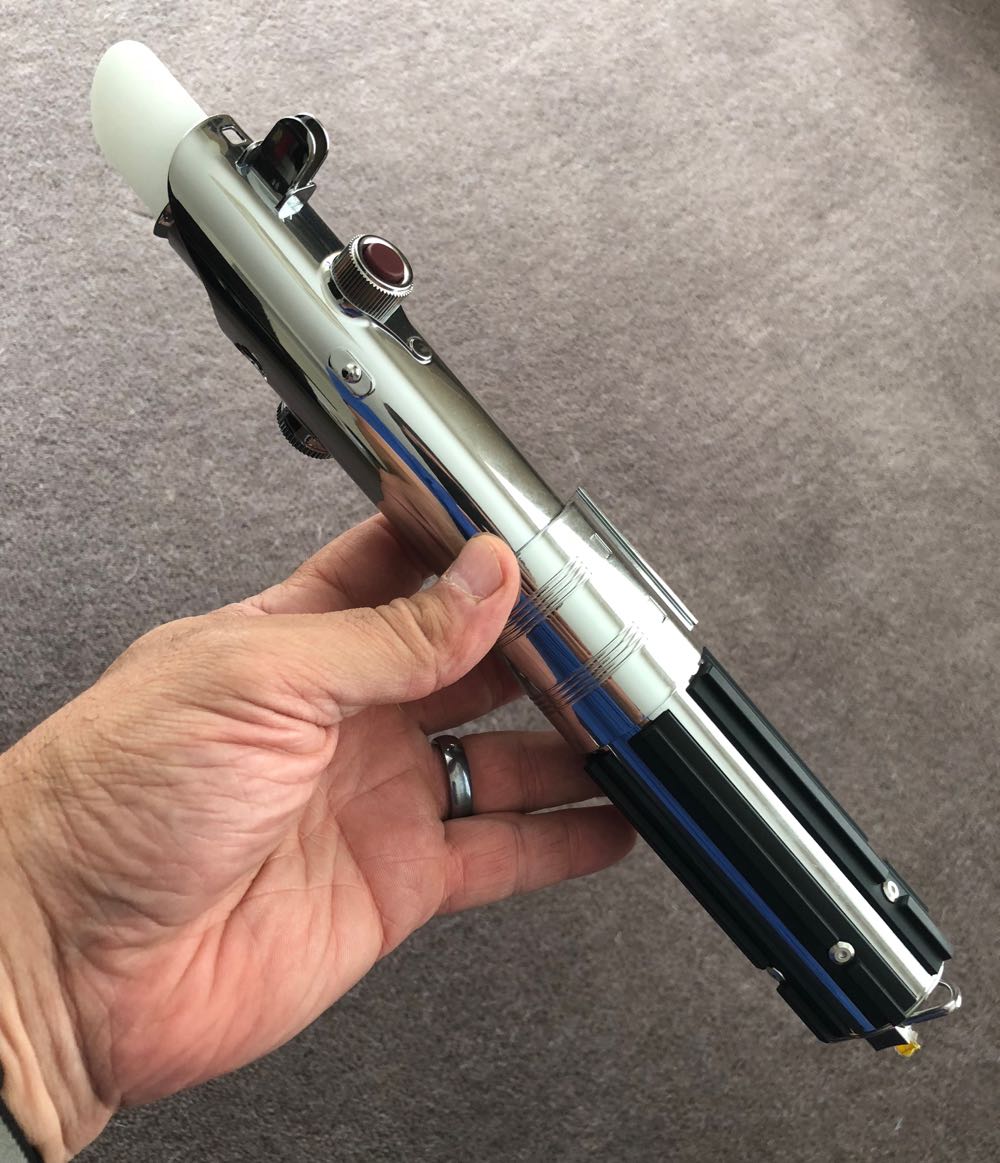 It’s pretty easy to get set – pair the lightsaber, calibrate the lightsaber (you have to draw a figure eight in the air) and you’re good to go.

With the app running on your phone, the headset reflects the image into your eyeline so you can see your surroundings as well as the menu system, your opponents and the playing area in front of you.

A small battery-powered tracking beacon is placed on the floor in front of you. It’s best to give yourself some room – a couple of metres in all directions.

When it’s go time – you get to activate the lightsaber and it’s a thrill to not only hear the amazing ignition sound but also see the blade light up on the lightsaber hilt you’re holding.

You can choose to play holochess or take part in the ground battle but we just wanted to swing that lightsaber.

And being called Jedi Challenges, the object of the game is to not only build up your lightsaber skills but also develop your Jedi powers.

Before you take on your main opponent, you get to practice against Imperial droids and Stormtroopers and learn how to deflect a laser fire and slash them with your lightsaber if they get too close.

Jedi Challenges offers guidance on where your lightsaber needs to be to deflect the blows and these gradually get faster and more complicated as the action intensifies.

Players build up points as they strike their opponent to drain their energy and claim victory.

The menu system is like looking at a star map with different planets offering different opponents and levels as your skills improve.

Before fighting a new opponent, you are given a short training session to learn new methods of combat and defence.

As you move through the levels you learn to dodge and duck to avoid injury while looking for the openings where you can unleash your own attack with your lightsaber.

When you progress to take on Darth Vader, you will need to harness all the skills you’ve learned to beat him.

You have to dodge left and right and duck to avoid his attacks as well as plan your own.

Don’t for a minute think just swinging wildly will get you through, it’s a lot more precise than you think.

And if you think it sounds physical, you’re absolutely right.

Playing Jedi Challenges certainly got our heart rate up and raised a sweat so you’re exercising as much as having fun.

When playing holochess or the ground battles it’s not as physical as a lightsaber dual but still very entertaining.

You can see the images in front of you and watch the battle unfold and direct your troops on the floor of your room.

The quality of the image coming through the app on the smart phone inside headset is surprisingly good.

Although there are some moments when there is reflection and you see images in the corner of your eye but this doesn’t detract from the game at all.

One suggestion we had was expanding the challenges.

Wouldn’t it be great if you could choose to be a Jedi or a Sith at the start of the game and fight different opponents according to that choice?

Maybe you could even buy a replica Darth Vader lightsaber if you choose the Sith path – that opens up a sale to fans of the game and collectors.

If you choose Sith, you’d be able to take on Luke Skywalker, Obi-wan Kenobi, Qui-gon Gin, Rey and even Yoda in your battles.

Jedi Challenges provides an entertaining and memorable experience for any Star Wars fan.

The Force is definitely strong with this one.

CONS: Reflections occasionally in the corners of your eye can cause confusion.

VERDICT: Jedi Challenges provides an entertaining and memorable experience for any Star Wars fan. The Force is definitely strong with this one.