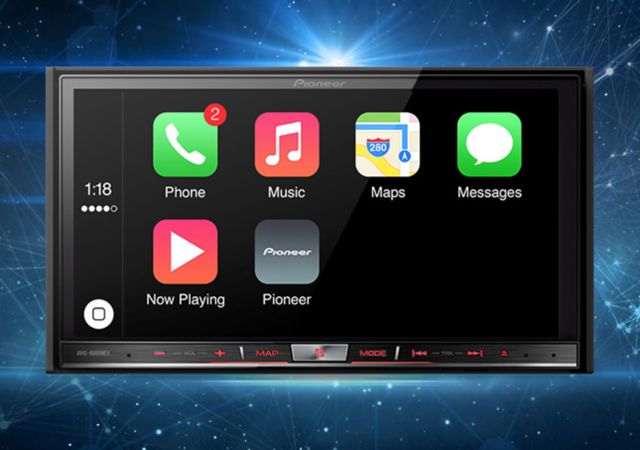 CarPlay is the new Apple standard to safely use your iPhone while your driving and Tech Guide had a chance for a hands-on demo of the system.

Apple’s CarPlay requires an iPhone 5, 5C or 5S running iOS 7.1 and a compatible system that can be found in the latest vehicles from Mercedes Benz, Ferrari, Honda, Hyundai and Volvo.

There will also be CarPlay compatible aftermarket products from Pioneer and Alpine that can be installed in your current vehicle.

For Tech Guide’s CarPlay demo we used the system in a 1965 Mustang that had a Pioneer AVIC CarPlay-ready system installed.

When we connected our iPhone to the system the CarPlay logo appeared on the screen and then a few seconds later some familiar icons could be seen on the in-car system’s display.

These included the icons for Phone, Messages, Maps, Music, Podcasts and another icon entitled Now Playing.

Once the Lightning cable is connected, you can put the iPhone away or out of sight.

Through the Phone app on the in-car system you can easily scroll through your contacts or favourites as well as access your list of recent calls. We could also use Siri to call someone on our contact list.

On the bottom left of the screen is virtual home key which, just like it does on the iPhone itself, brings users back to the main screen with all of the icons.

The beauty of this is that there is nothing an iPhone user needs to learn. It’s the same as using your iPhone on the move.

CarPlay will only use the apps that make sense to use behind the wheel so don’t expect to fire up a game of Angry Birds while you’re stopped at the lights.

Safety is of paramount importance and even though Messages is one of the included apps, the actual messages are read out by Siri rather than displaying the actual text on the screen.

Your music is also right at your fingertips so you can access your songs, albums and iTunes Radio stations.

Users will also be able to add other favourite apps like Spotify, Beats Music and iHeartRadio.

When it comes to finding a destination, Maps is up to the task and can start turn-by-turn directions in seconds.

What we liked was the fact that some of the suggested addresses were the ones listed in recent emails and previous Maps searches so it was just a matter of hitting one of these addresses to start navigation.

Whenever the system had to announce an instruction during navigation, the music would fade down and then resume at the regular volume once Siri stopped talking.

And now listening to your favourite podcasts is even easier than ever with Apple’s official Podcasts app to allow drivers to listen to the latest episodes while they’re on the road.

CarPlay is a simple system and interface and that is just the way it should be behind the wheel.

If it were more complicated it would pose the risk of distracting the driver from the road.

CarPlay is ready to go if you have an iPhone 5, 5C or 5S that’s running the latest iOS 7.1 update. All we need now are the cars and aftermarket systems to connect them to.

They should start arriving in the coming weeks.