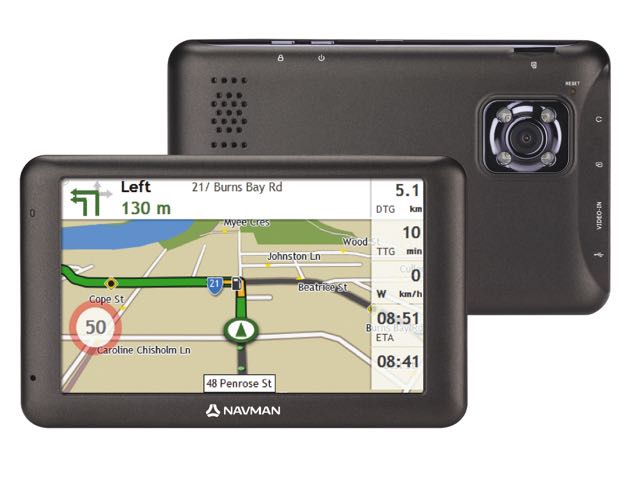 Navman’s new MiVue Drive combines two popular devices into one – an in-car GPS for navigation and a camera to record any on-road incidents.

Before now these were separate but still popular products.

But Navman has cleverly merged the two into single product and killed two birds with one stone.

The MiVue Drive has got your all of your needs covered behind the wheel – it can give you turn-by-turn navigation and also record whatever happens while you’re driving.

The camera on the rear of the device continually records high definition footage while the 5-inch screen displays the navigation information.

MiVue Drive will only retain the footage if it detects an incident and save it to a protected file.

Built into the device is a three-axis G-Shock sensor to sense the force and direction of impact.

The camera also has a 120-degree lens that works even in low light situations and at night so it captures a wide-angle view of what’s ahead of you.

The video will also be stamped with the time, date and the exact location.

Footage can be used by drivers as evidence for the police and insurance companies.

These videos have the potential to protect driver’s from fraudulent or disputed claims so it offers peace of mind.

The product comes with an 8GB memory card so you’re ready to use it right out of the box.

There’s even a video-in port so drivers can connect a reversing camera which can also be viewed on the 5-inch display.

On the GPS side, the device has all the features Navman is known for including lifetime map updates, safety alerts approaching red light and speed cameras, drivers alerts ahead of black spots and traffic updates.

Also on board is landmark guidance which offers directions based on what you can see through your windscreen like building names, colours and building types.

For example, the device might say to turn left at the petrol station.

There’s also advanced lane guidance and 3D junctions so drivers know exactly which lane they need to choose in complicated intersections and exits as well as speed limit alerts to let you know if you’re exceeding the local limit.

The MiVue Drive can also help you find popular places of interest as well as guide you to the nearest parking or fuel station.

For road warriors who need to keep track of their travels there’s also an onboard digital logbook to record the kilometres you’ve travelled.

One thing to note – the battery can only run for about an hour at a time on its own so you’ll need to have the power cable connected to keep it charged on longer trips.

You are, after all, powering the screen and the camera at the same time.

The Navman MiVue Drive comes with a two-year warranty and is available now and is priced at $299.