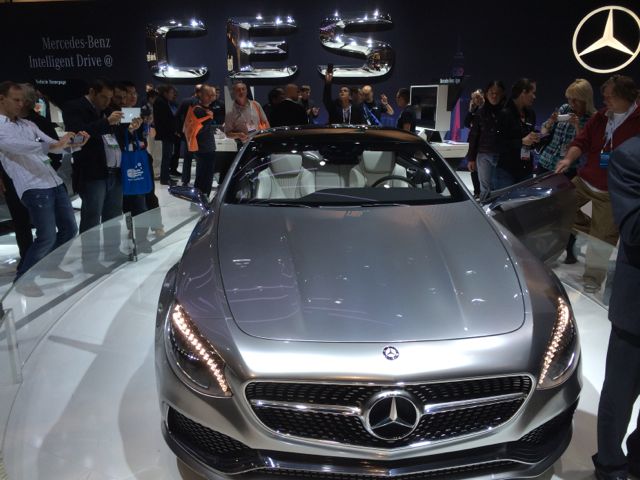 The International Consumer Electronics Show had a record number of automotive exhibitors who revealed the future of our driving experience.

The consumer tech trade show at the Las Vegas Convention Centre could have been mistaken for a motor show for attendees who took a stroll through the packed North Hall.

It was there where major car companies like Audi, Mercedes Benz, BMW, Chrysler, Ford, Kia, Mazda, Toyota and General Motors had their stands to showcase the cutting edge technology and concepts that will be rolled out in the years ahead.

For Audi the future looks like self-driving cars that can take over the menial task of moving along in heavy traffic a little bit like auto-pilot on a plane and allowing the driver to do other things while the car takes control.

This is made possible with front and rear facing digital cameras, laser scanners, radar and a central computer system that makes the vehicle completely aware of its surroundings.

At CES, Audi had a prototype A7 kitted out with this technology that was able to negotiate a simulated traffic situation.

And as soon as the driver grabs the wheel, manual control immediately resumes.

For the German car manufacturer it’s about connectivity and communication.

Vehicle to vehicle communication – called CarToX – allows drivers to share information about their car’s reaction to the conditions around them with other drivers.

For example, CarToX-enabled cars can warn other drivers near them about potentially dangerous conditions like ice patches and flooded roads.

Mercedes Benz is also hard at work on a predictive user interface that can get to know the driver’s habits so well the car can anticipate his or her needs including calling their spouse, setting the air conditioner and anticipating where they want to go.

Autonomous self-driving cars were also a focus for BMW at CES with the company unveiling a modified M235i at the show that can brake, steer and accelerate on its own.

To demonstrate how precise the new active assist technology is, the 2 Series car can slide into a controlled drift and then show how well it can handle the situation and get the vehicle back under control.

At CES, General Motors announced it would be building 4G/LTE connectivity into their 2015 vehicles to allow passengers to connect up to seven devices simultaneously.

The company sees this as a way to enable faster and more reliable to access to in-vehicle apps and content.

Imagine the passengers in the back seat being able download a movie to watch before a long drive as easily as they could in their lounge room.

The focus on Kia’s technology developments is around accurate voice control.

The system is called UVO – short for “your voice” – and will enable drivers to control their music and smartphone hands free.

Kia also showcased a concept UCD (User Centred Driver) on its stand at CES which includes a widescreen heads-up display that projects your speed and navigation directions in 3D.