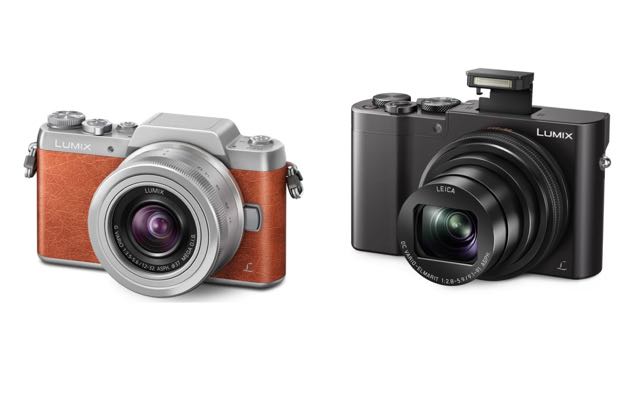 Getting hold of two Lumix cameras to trial at once – the GF8 and the TZ110 – doesn’t happen very often and when it does it leads inevitably to comparisons. So here goes.

First, the similarities. They are both pocket-sized cameras. The TZ110 more so.

I much prefer the TZ110’s built-in lens cover and lens that comes to life when you power on the camera, as opposed to the GF8’s clip-on lens cap and the need to physically enable the 12-32mm lens with a twist after powering the body.

A small matter, really, but if you hate chasing lens caps through your pockets as much as I do (and hate those lens cap retainer slings even more) then it’s the sort of thing that can grow tiresome.

The GF8 has something the TZ110 doesn’t. It has a selfie screen, a rear LCD display that flips up over the top of the camera.

When you press the shutter, you get a three-second countdown on the display so you know when to pull your duck face while ensuring the grip on your selfie stick is just right.

That it flips over the top of the camera counts for a lot, leading to selfies where the selfer appears to be looking into the camera lens rather than that 100-yard stare somewhere off to the right that you get with displays that flip out to the side.

If all you want from a camera is the ability to take sweet selfies, look no further than the GF8.

Yes, your phone could do the same but you wouldn’t have the raft of fancy image capture features that come in the package, though this mystifies me because, well, the kind of person so enamoured with selfies who might buy a camera based on its selfie functionality alone is – and once again pardon my prejudice – probably not the kind of person who really cares that much about using RAW for improved dynamic range. I may be wrong on that count.

What I found disappointing with the GF8’s selfie feature is the difficulty of using fill-flash. I had to fiddle with manual settings and mine the menus to adjust the flash output setting before obtaining a satisfying result when shooting in a strongly backlit scene.

Even the Intelligent Auto feature I’ve often cheered in Lumix reviews left me disappointed. Bit of a mystery, that, because it might just make a lot of users a lot happier with their results.

That the GF8 has an obvious and easy to access Function button on the top left panel to enable Wi-Fi sharing (its function can be modified but not turned off) further speaks to this camera’s market. Snap. Share. Put it back in your pocket.

But it’s just too easy to push that button. So much so that it’s irksome. Perhaps it’s just me who habitually grips a small camera with the left index finger coming to rest where that button is. Perhaps not. But I grew tired of switching out of the function I kept unintentionally enabling.

Another selling point is the Beauty Retouch function. Basically, this is a software function that, when put to use, isolates skin tones for smoothing and allows for applying make-up.

This is a feature that perhaps might best be assessed when loaned to a selfie-obsessed, image-conscious teenager. Me? With my head for radio? Not so much.

In any case, use with caution. It’s easily overdone. You don’t want to end up on one of those listicles featuring the world’s worst “beauty” shots.

So, it’s mostly a thumbs-up for the GF8’s selfies but, when the TZ110 offers so much more for an additional $300, I have to wonder why somebody who actually likes capturing pics of things other than themselves wouldn’t pony up for it.

The TZ110 has 4K video capture, 4K photo, a 10x zoom (25-250mm), a pop-up flash that doesn’t feel like it’s going to break when you tuck it away, and no Function button on the top left panel that drives you nuts.

It also has a viewfinder, so if you want to pursue street or candid photography like a modern-day Garry Winogrand, you’re gonna love that little window on the world.

Being able to shoot 4K is a wonderful thing, especially if you have one of those newfangled 4K tellies. Who wouldn’t want to see their holiday memories in the glory of 4K?

But here’s the tip. With four times the resolution of Full HD video, you also have four times the capacity to induce motion sickness with wobbly footage.

If you want the best from 4K video off your TZ110, you gotta lock that sucker down on a tripod, or other stable platform. Trust me on this.

Get yourself a Gorillapod or similar. You’ll thank me for it. You could, of course, rely on the camera’s image stabilisation except that, er… it doesn’t work in 4K. Good stabilisation in HD, though.

You will need to work a bit for best results when shooting. I found the 4K vision off the TZ110 a bit thin at first so remember that leaning on a point’n’shoot mentality might disappoint you.

For instance, when pointing the TZ110 at a high contrast beach scene of waves crashing on rocks, the AF locked on with ease.

When pointing it at a low-contrast scene of wet sand, it hunted. Pretty severely. This is not so much a fault as it is a case of the user having to think about what they’re doing with regards to the AF/MF mode and exposure.

Also a feature of the camera’s 4K capture capability is the 4K Photo mode, in which you can extract a 4K still photo from a 4K burst capture. It works a treat, getting around the limitations of a mirrorless camera with grace. I’ve not been very enamoured with this feature in previous models but, given that results of 4K Photo captures can actually overcome the inherent lag between seeing your shot, pressing the shutter and making an exposure, I’m increasingly appreciating its purpose.

Another nifty feature in the TZ110 is something called Post Focus.

I say “nifty” because I’m not really sure what the point of it is. Here’s how it works. You take a snap and, afterwards, preview the image on the rear display using Post Focus to select the part of the image that “should” be in focus.

I can’t get over the idea that taking a photo should involve the decision about what’s in focus when you actually take the photo. This seems to me a somewhat rudimentary requirement for capturing images, regardless of user skill. However, I tested it, it works. If you can use it, more power to you.

Another thing I liked about the TZ110 was that it recharges via a USB cable. For reasons I can’t explain, I like this better than having to remove the GF8’s battery to charge it in a cradle.

Speaking of power, each camera provided satisfying battery life. I got a full day’s use out of each model even when pushing them hard with testing, which is more than can be said for some other Lumix models I’ve tried.

The TZ110’s higher price tag will get you about 4 million more pixels and a 5-axis optical image stabiliser. You’ll appreciate this when shooting at the 250mm end of the lens range. Otherwise, specs-wise, there’s not a lot separating the two.

Indeed, side-by-side comparisons of images off each camera’s MOS sensors revealed there’s barely anything separating the quality of still image between the GF8’s 16.8MP and the TZ110’s 20.1MP. This is not surprising.

You can, of course, swap out the lens on the GF8.

There’s a huge range of Lumix lenses to opt for but, given the camera’s primary function, being selfies, it seems unlikely this camera’s buyers will be adding a second lens.

With the TZ110, the lens is fixed but, given its versatility, should meet all expectations if you purchase this for what is was designed for, as a travel camera.

Pretty much all the bells and whistles you would expect in this category of shooter in the sub-$1000 range are there.

What we have here is two cameras that, at first glance, may look as though they fulfil similar purposes. They don’t.

While both offer good image quality in a small package and, with regard to their respective pricing a satisfying range of features, one of these cameras is about a world view that centres on its user, while the other is about everything else. Me? The GF8 feels like a one-trick pony. I’d take the everything else.

This review was written by professional photographer Chris Oaten from InsightVisuals.com.au