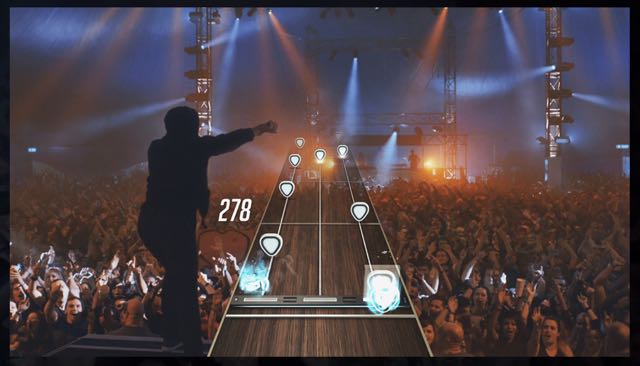 Who hasn’t ever dreamed of being a rock star and showing off their awesome guitar skills in front of a capacity crowd? For those of us who didn’t achieve this for real – we’ve got Guitar Hero Live.

The popular music game is back but it has been revamped right down to the guitar itself.

And, unlike the first game, players have the choice of playing to a live audience or to the music video of some of the best songs ever recorded.

The guitar is not quite full size but still big enough to comfortably play. It comes with a shoulder strap and the button configuration on the neck of the guitar are placed in two rows of three on top of each other.

It’s more like playing a real guitar than just hitting coloured numbers like on the previous game. 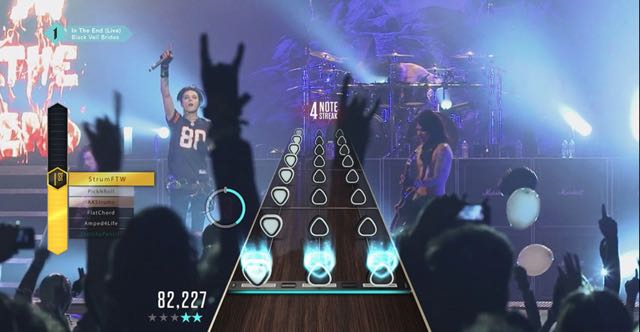 Players have to hit the chords in time with the music – this is very well explained in the tutorial.

At the start of the Live portion you are given a first person view as you make your way to the stage with everyone pumping you up and encouraging you. And you can’t skip these intros.

You’ll perform in a variety of venues from small clubs to massive arenas in front of real crowds in fictional bands called Rock the Block and SoundDial.

Now how well you play also determines how well you score and if you hit all or even most of the notes the crowd is going to love you.

You’ll see and hear the crowd cheering you while your fellow band members are pumping their fist and giving you the thumbs up. 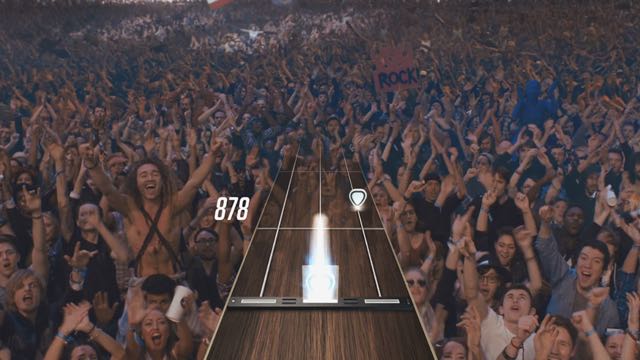 But if you drop lots of notes the crowd is going to turn on you – and so will your band.

Unfortunately, there is no middle ground – they will either love you or hate you.

On the Guitar Hero TV side, you are rocking out to music videos but the same judgment from an audience.

In this mode of the game you are actually playing along to the music video of that song.

That in itself can be a little distracting while you’re trying to hit the right chords coming down the middle of the screen.

Good for anyone watching – not so good for the player. 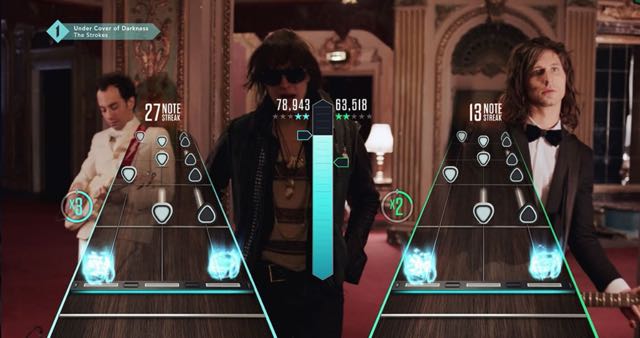 No matter what mode you play your progress in the game takes you up through the levels and increases the difficulty as you go.

You can even see how you stack up with other players around the world.

And as you level up you earn rewards that can unlock other premium content like live concert footage, new music videos and song packs.

There’s a wide variety of more than 200 songs to play within the game that include recent hits and some older classics from artists like Blink 182, Rihanna, Living Colour, Queen, Faith No More, Pearl Jam, David Bowie and much, much, much more.

You can spend your in-game currency or your own hard-earned cash to unlock more song packs but they are only unlocked for 24 hours – you can’t permanently unlock them.

If a friend is over with their guitar you can play together but you can only play multi-player mode on your own.

Overall Guitar Hero Live is an interesting reinvention of the game.

There is a lot going on with different choices for song packs and a few intricacies within Live and TV so it can appeal to anyone who wants to feel like they’re on a concert tour or someone who just wants to play a favourite song when they feel like it.