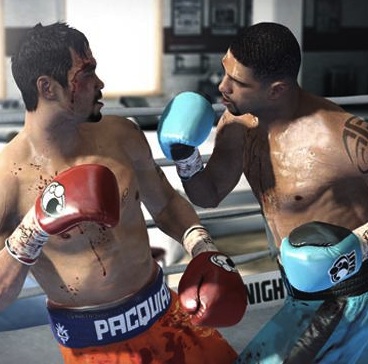 The sport of boxing is a lot more than just wildly throwing punches – it’s about timing, picking your mark and knowing when to block.

Fight Night Champion, the latest version of the hugely popular EA Sports sports franchise, is the most accurate graphical and physical representation of boxing ever seen outside an actual ring.

In this version Australian boxers Anthony “The Man”Mundine and Billy “The Kid” Dib are included among the greatest boxers of all time. We speak to them in a video interview.

We should state at the outset this game is not for kids or the fainthearted – blood, sweat and spit flies like it does in the ring for real.

While this a credit the developers  it could actually be too realistic for some people. But we suspect that anyone who’s ever played a Fight Night game will unanimously agree this is easily the best ever.

For a start Fight Night Champion is the first to include a storyline in Champion Mode. You slip on the gloves as middleweight contender Andre Bishop who has his challenges both inside and out of the ring.

It’s a little like Rocky with a long shot climbing up the ranks which is entertaining in itself.

But alongside it is the Legacy Mode that makes it possible for players to create their own fighter and start scheduling fights and even managing their training and even sponsorship events.

Players can also create match-ups with some of the greatest fighters ever to lace on a glove including Muhammad Ali, Mike Tyson, George Foreman, Joe Frazier, Bernard Hopkins, Sugar Ray Leonard and Roberto Duran plus many, many more including Australian fighters Anthony Mundine and Billy Dib.

But the star of the show is the advanced physics behind the game called Full Spectrum Punch Control.

The third person system offers incredible accuracy which allows players to throw a variety of punches including hooks, jabs, overhands, uppercuts and hooks.

Defending and blocking is also an important aspect of game play and it doesn’t take long to master the controls. It’s easy to duck  and weave and then launch your own attacks, counterpunches and combinations.

Players have to also watch they don’t tire themselves out when throwing too many punches so the whole stamina and fitness aspect of the game also come in to play. You really have to pick your mark with the right punches.

This feature prevents the game becoming a boring button masher.

Players can also take the action online to challenge their friends and determine exactly who is king of the ring.

Sony delays game out of respect for Japan quake victims