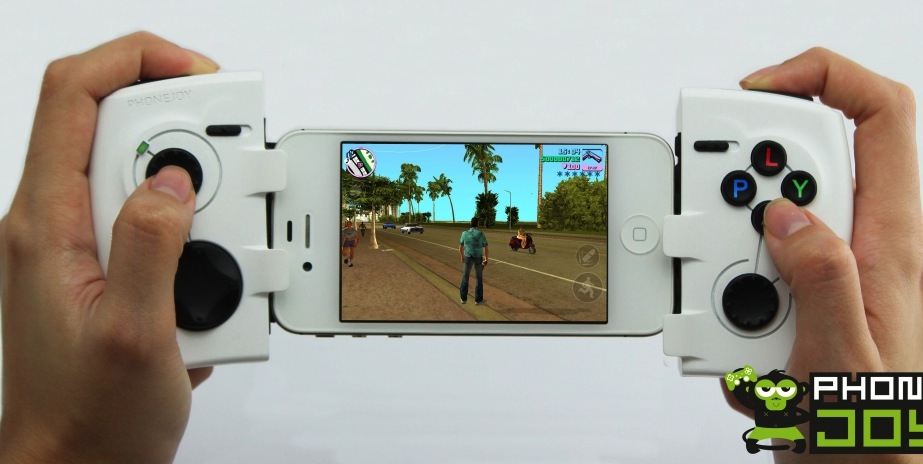 Many people are using their smartphones as a gaming device and a new product called PhoneJoy can add physical controls to enhance your gameplay.

Set to be unveiled at the International Consumer Electronics Show in Las Vegas, the PhoneJoy is a gamepad controller that can fit and connect to any smartphone.

It can do this with the patented easy slider mechanism so devices of any size can fit in the centre of the PhoneJoy controller.

The PhoneJoy controller uses Bluetooth to wirelessly connect to any smartphone or tablet and provides physical controls for the game you want to play.

While it’s convenient to be able to play games on your smartphone or tablet, the touchscreen controls aren’t always ideal to provide an enjoyable experience especially for action and shooting games.

The PhoneJoy controller has a familiar controller layout with 14 buttons and is similar to the PlayStation 3 and the Xbox 360 with an analog thumbstick on either side along with a D-Pad and four control buttons.

It can fit all smartphones that are up to 15.3cm wide and 1.4cm thick and is supported by more than 300 games on the Android and iOS operating system with many more to be added in 2013.

And while a tablet won’t fit inside the PhoneJoy controller, it can still be linked wirelessly with Bluetooth and used like console gaming controller.

The creators of PhoneJoy see the future of gaming is mobile especially since the latest devices are packing even more computing and processing power.

With PhoneJoy you can still enjoy the play anywhere portability that smartphones and tablets provide but you can add the physical controls as well.

The PhoneJoy is quite small and also easy to carry around. In the closed position it is 10.2cm wide, 8.7cm long and 3.7cm thick and weighs 250g.

It also has its own rechargeable battery which lasts up to 20 hours.

PhoneJoy is being fund through the KickStarter program and has already reached its first fundraising milestone to allow production to begin.

After it is showcased at CES, PhoneJoy should be available to buy around March/April. Pricing has not yet been determined.