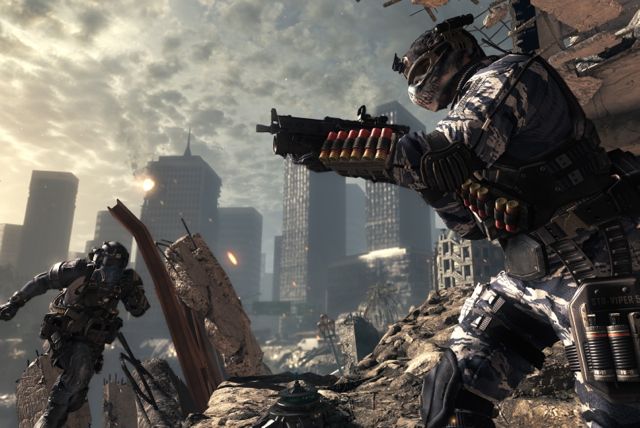 Our hands on with Call of Duty: Ghosts multiplayer

The highly anticipated Call of Duty: Ghosts game will be released in early November and Tech Guide went hands-on with the new multiplayer mode.

Multiplayer is arguably the most popular part of the highly successful Call of Duty franchise and we’re expecting Call of Duty: Ghosts to be no different.

Call of Duty: Ghosts is set in a drastically altered US following a series of cataclysmic events that lay entire cities to waste.

A hint of how these disasters take place was revealed at the Call of Duty: Ghosts multiplayer event we attended last week.

An entire level of the campaign of Call Of Duty: Ghosts takes place in orbit above the earth where a military satellite called ODIN is programmed to fire “kinetic rods” from space that can devastate entire cities.

A battle ensues to stop the satellite from firing and players must fight their way through the space station before suiting up and heading out into space to try and hotwire the satellite before is releases its deadly payload.

Let’s just say the level ends with a fiery entry into Earth’s atmosphere.

Call of Duty: Ghosts is the story of a ragtag squad of soldiers who join forces to restore some semblance to the way of life they once fought for.

Players will find the usual Team Deathmatch and Domination game modes with Call of Duty: Ghosts along with two new modes: Blitzed and Cranked.

Blitzed is a like the popular Capture the Flag mode but instead of collecting flags you’re going through portals.

Each time you get to an enemy’s portal and go through, you can score points and the first team to get to the designated score wins.

Cranked is another exciting mode that is like Team DeathMatch but with a twist.

It’s the same set up with teams trying to rack up more kill than their opponents but with Cranked every time you score a kill – a 30 second countdown opens up on the screen.

Now you’ve got a score another kill before the timer runs out. Why? Because you’ll blow up if you don’t – that’s why.

That’s one way of picking up the pace of the game and bringing everyone out into the open to look for that next kill.

Another new feature of Call of Duty: Ghosts multiplayer is the ability to change your appearance in the game.

For a start you can choose to be a male or female so it’s no longer just a male-dominated arena.

From there you can move on to headwear, uniforms and other add-ons so you can dress up to suit the map and even choose slightly different colour options to blend into the environment.

All up there are more 20,000 different combinations to choose from so you can be sure there will be no two soldiers that look alike.

Rather than being locked in to three types of perks and choices within those types, players now have an eight-point allowance to pick and choose the perks they want.

For example, if a player wants to stack their stealth perks and not have any speed perks they can – and vice versa.

The budget of eight points can now offer more flexibility and puts all options at your fingertips from the start rather than only earning certain perks as you level up.

At the Call of Duty: Ghosts multiplayer hands-on we got to play four of the 16 maps that will be included in the game when it’s released in November.

The four we played were Chasm, Octane, Strikezone and Whiteout. They looked sharp and clear with lots of detail in the environment from the texture of the walls, the surface you’re running along and even the weather.

Chasm is a large map set in a city that was devastated by a massive strike that has left a huge chasm on the edge of the map.

Part of the map is an underground railway station and a shopping centre so there are a lot of tight combat areas that run-and-gun players will love.

Octane is set in Las Vegas and is a medium sized map centred around a destroyed gas station and the surrounding strip malls and shops.

There are some tight backstreet settings along with some long range areas where snipers may pick off unsuspecting enemies.

Strikezone is another medium sized map that’s set around a baseball stadium.

There are multiple levels and smaller areas that open up into wider open spaces so there are plenty of opportunities for close combat, ambushes and medium range engagement.

Whiteout is set in a fishing village that has been blanketed in ice and snow and offers lots of tight laneways around the buildings and the landscape.

The way the map has been set up allows for easier flanking with players able to use the buildings and landscape as cover.

Call of Duty: Ghosts will be released on November 5.