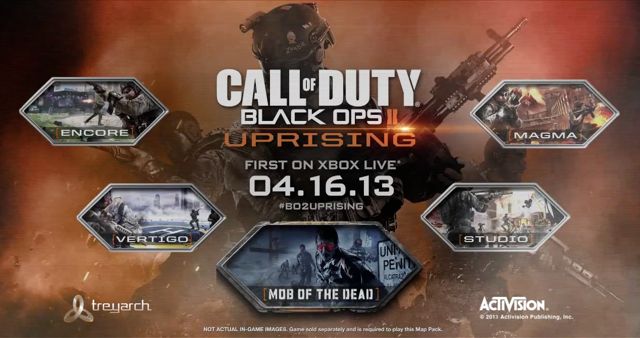 Attention Call of Duty fans – there will be new downloadable multiplayer content for Black Ops II including four new maps and an all-new Zombie experience set in Alcatraz.

The new Uprising pack will debut exclusively on Xbox 360 on April 17 with the PS3 version to follow a month later.

This is the second DLC (downloadable content) pack from the award-winning developers Treyarch and Activision publishing.

Uprising will include four new multiplayer maps – Magma, Encore, Studio and Vertigo and a new Zombie game – Mob of the Dead – set in the prohibition era on the island prison Alcatraz.

Set in a modern Japanese village, Magma has one new danger – lava – which is flowing from the recently erupted volcano and carving a number of paths through the buildings in the town. One wrong step in the molten rock means instant death.

This map takes place in a London stadium after a music festival and offers elevated positions from the stage and the upper seating levels and is suited to close quarters combat and long range attacks.

A fan favourite from the original Black Ops multiplayer game was Firing Range and Studio takes that setting and places it in a Hollywood Studio backlot which puts players among a range of sets from sci-fi to westerns.

This map is set in an Indian highrise building that houses a high-tech lab and where one wrong step can send you plummeting to your death. There are multi-tiered pathways and ways to get around the map if you’re prepared to jump across dizzying chasms.

MOB OF THE DEAD

Four prohibition era mobsters played by Hollywood stars Ray Liotta, Chazz Palminteri, Joe Pantoliano and Michael Madsen are serving time on Alcatraz and find their escape plans are thwarted by the rise of the undead. They have to call on their mob skills with firearms and other weaponry to survive.

The Uprising DLC pack will be available from April 17 on Xbox 360 and a month later for PS3.

Listen to episode 108 of the Two Blokes Talking Tech podcast