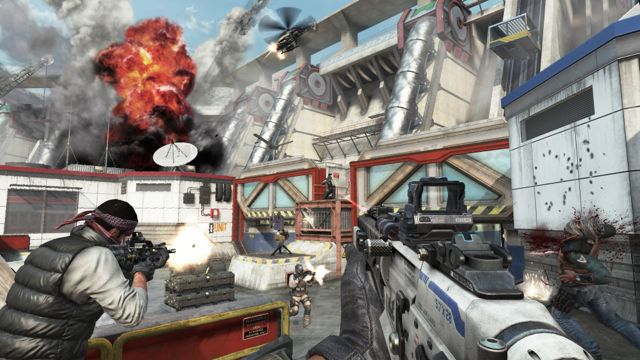 Revolution – the first of what will be four DLC maps packs for the popular first person shooter Call of Duty Black Ops II – contains four extra multiplayer maps as well as a new Zombies map and a new Zombies game mode.

And, for the first time, the DLC map pack will also include an all-new weapon – a submachine gun called the Peacekeeper – designed purely for the multiplayer experience.

PlayStation 3 players will have to wait a month before being able to access the Revolution DLC Map Pack.

“On the multiplayer and Zombies fronts, we’ve delivered the most expansive DLC offering in our studio’s history, with experiences fans have never seen in the franchise before: from four maps in exciting new locations with dynamic environments, to a new Zombies mode of play, to a new bonus weapon in multiplayer – it’s all there and then some.”

The four new multiplayer maps are set in locations around the world and in also vastly different environments.

Set in a snowy alpine ski-resort, Downhill allows for close quarters combat thanks to its tight blind corners.

But watch put for the ski lift that works continuously during the game – if you get in its way you’re dead.

Venice Beach is the location for Grind – a skate park to be precise – and it is filled with half pipes, ramps, bowls and other curved structures that make it challenge to find real cover.

A couple of elevated vantage points also make it difficult to take cover which means attack is the best form of defence.

Mirage moves the Call of Duty Black Ops II multiplayer action to China in a luxury villa that has been almost buried in sandstorm.

The map has areas of combat inside and outside with the piled sand allowing players to enter buildings from second story windows.

In Hydro players are transported to a hydroelectric dam in Pakistan with lots of long-range passages that are suited to snipers.

But while players are trying to stay out of the sniper’s sights, they still have to avoid walls of water that will cut down players quicker than bullets.

This Zombie map is set on a crumbling skyscraper in the middle of China where the dangers of falling is not only near the windows but also down the open elevator shafts.

And all the while players to trying to keep the advancing hordes of lumbering Zombies at bay before they are over-run.

Now players can swap sides and play as a Zombie in the new Turned game mode.

Instead of packing a gun, your powers as one of the undead is your only weapon.