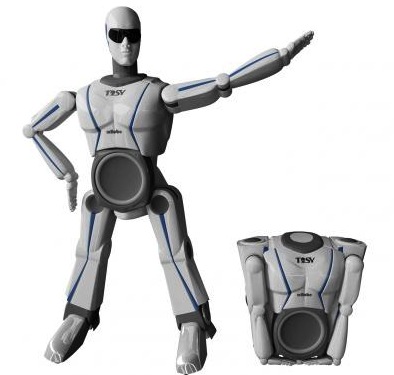 Transform your music with mRobo Ultra Bass – a dancing robot

One of the quirkier gadgets of the Consumer Electronics Show would have to be the mRobo Ultra Bass from Tosy – a portable speaker and MP3 player that transforms into a full dancing robot.

The first version of the mRobo was unveiled by singer Justin Bieber at CES 2012 in front of hundreds of show attendees.

The mRobo is 24.5cm tall and has a surprising degree of movement and articulation and can be programmed to dance to your favourite tunes.

Tosy’s device has advanced arm movements with six degrees of freedom within its joints. This means it can realistically imitate most human arm movements.

There are already songs loaded on the robot along with choreography from Derek Hough – the three-time champion of the US version of Dancing with the Stars.

But users can also use Tosy’s new software – Tune Robo – to choreograph the robot with their own dance routines.

Users can download other dance motion files from hundreds of songs from the Tosy Cloud online store.

Tosy will also soon introduce Edit Robo Software so it will be possible to create or edit motion files and upload them to the cloud to share with other mRobo users.