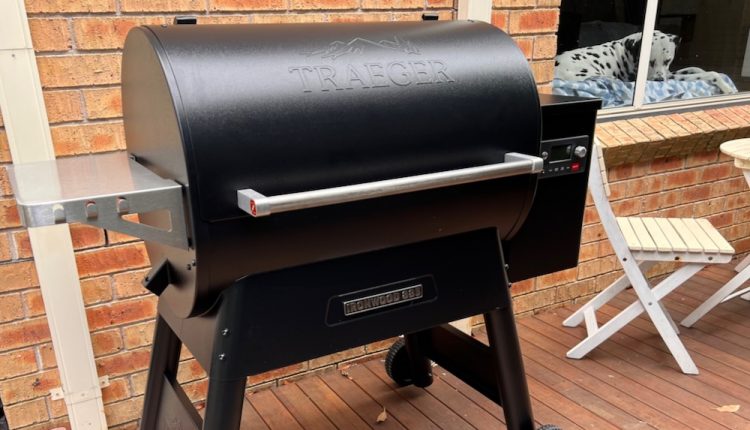 Whether you’re thinking of trying your hand at BBQ for the first time or if you’re a seasoned professional, the Traeger Ironwood 885 with wi-fi onboard and the companion app delivers across the board to help you cook like a true BBQ Pitmaster.

We love BBQ, we love eating ribs and brisket but never thought we would be able to make it for ourselves, but the Traeger Ironwood 885 grill has changed all that.

We’ve always been a big fan of the show BBQ Pitmasters and marvelled at their skills as they prepared award-winning BBQ pork, beef and chicken.
And now we’ve been able to try our hand at becoming a BBQ Pitmaster ourselves.

What makes things a whole lot easier is the technology built into the grill.

Traeger’s WiFIRE technology means you can connect the grill to your home wireless network and control it from anywhere.

This feature alone greatly appealed to us as we took our first step into this new world of BBQ and smoking.

The Traeger Ironwood 885 is just one model in the company’s line-up of smokers and grills.

The unit is on wheels so it can be moved wherever you need it in your yard and once you have you have found your spot, the wheels can be locked so it stays put.

It has a solid build quality and is fairly easy to put together out of the box. The box even converts to a little cubby house for the kids.

The Ironwood 885 uses wood pellets and is powered by electricity so there’s no need for a gas bottle or any other connection.

The Traeger D2 Direct Drive is what powers the grill on DC (direct current) to maintain a consistent temperature in any weather conditions. 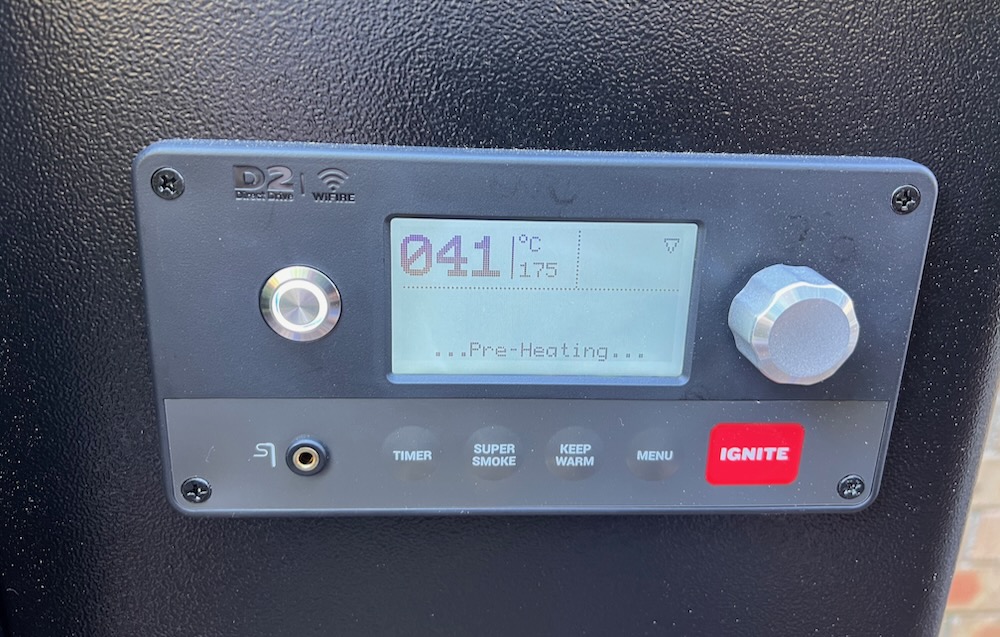 Once it’s ignited it uses the wood pellets for both fuel and to provide the smoke flavour to your meat.

The pellet hopper is on the right side of the grill and feeds down into the ignition chamber.

One thing we didn’t know was there were numerous flavours of wood pellets including hickory, apple, cherry, pecan, mesquite and many more.

So not only can you have a different smoke flavour but, as we’ve learned, there’s also plenty of options to flavour the cook with different rubs and sauces. 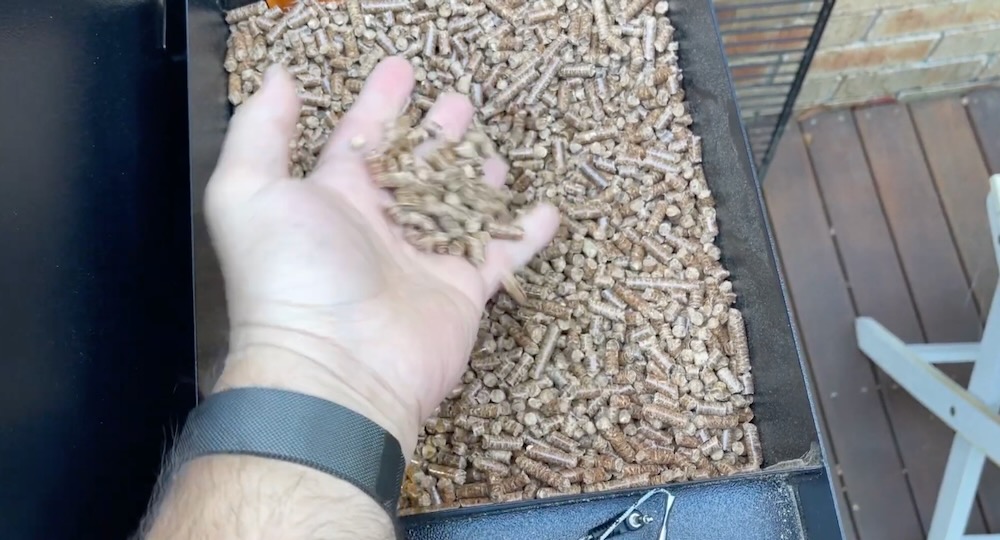 This was a whole new world.

But what we liked about the Traeger Ironwood 885 and its companion app was that everything was explained and spelt out, so we had expert guidance every step of the way.

The app not only lets you control the grill but also includes hundreds of recipes and videos for you to follow.

The Traeger Ironwood 885 is not your regular BBQ with a hot plate. It uses direct heat and smoke through specially designed channels in the main chamber.

It has a downdraft exhaust system that creates channels to circulate heat and smoke that can cook your food up to 20 per cent faster. 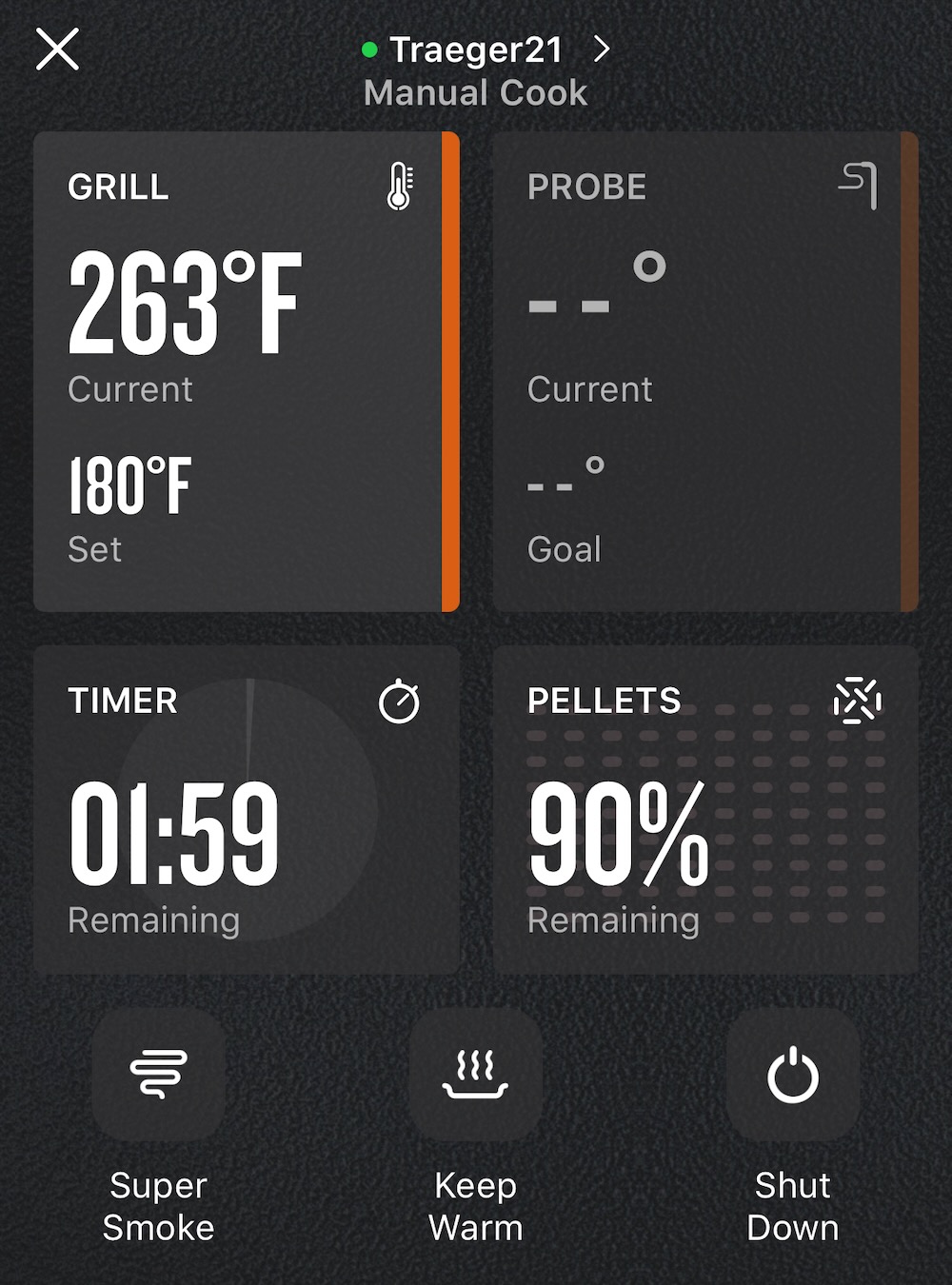 The downdraft exhaust system let you control smoke output while at the same time increasing the penetration of smoke into your food to really come up with that wood fire flavour.

inside the grill there are two Shelves with a large grilling area they can hold up to 10 chickens, 7 racks of ribs, nine pork butts and up to three briskets.

It also has double wall stainless steel interior and an airtight lid, so it keeps the heat in no matter how cold it happens to be outside.

there is a control panel and digital display that allows you to ignite the system, set the temperature, set timers and monitor your cook. 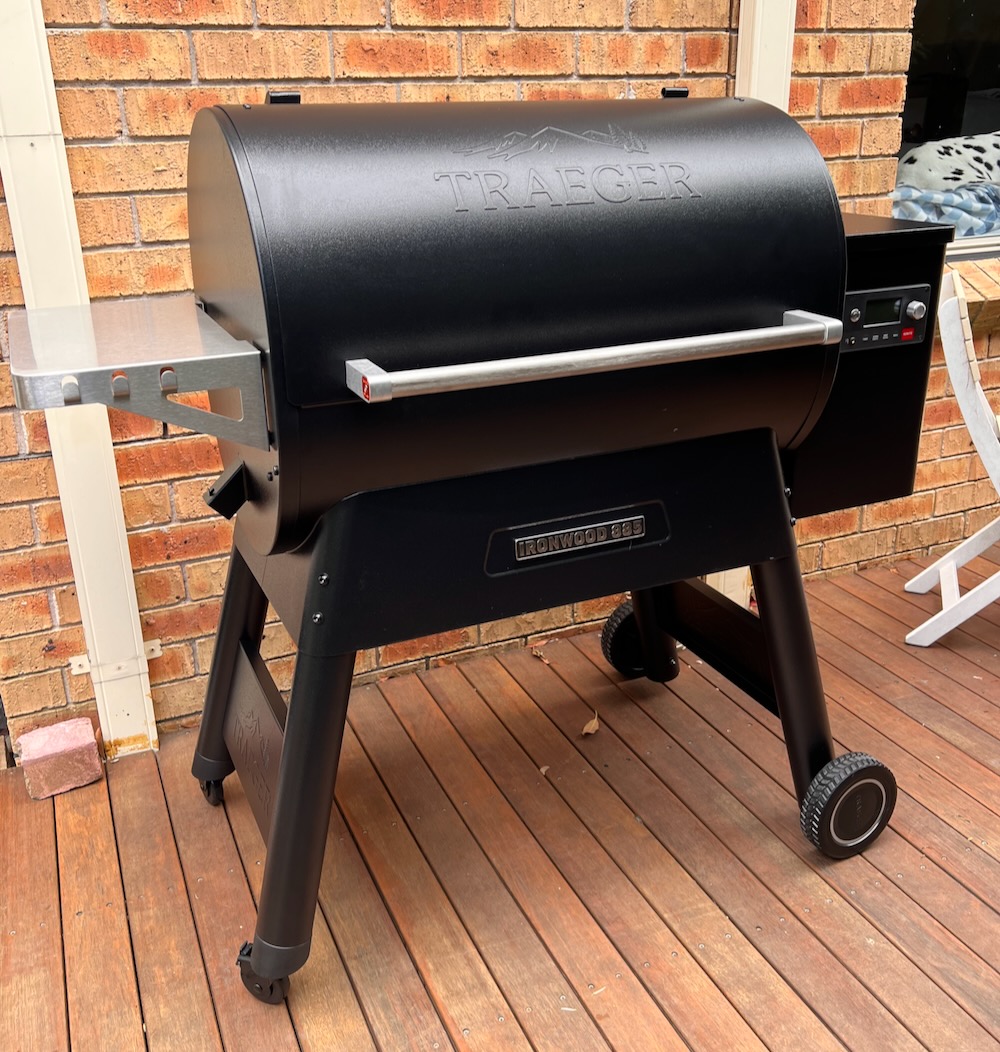 but thanks to the Wi-Fi controller you can now do all this from the Traeger app on your smartphone including setting and monitoring temperatures, keeping an eye on timers and receiving alerts.

There’s also a meat probe which can show you the meat’s internal temperature – a figure that’s used to determine if the meat has been cooked long enough. This information can also be displayed through the app as well.

And remember how we told you about the included recipes within the app? There are more than 1,500 recipes and videos.

You can follow your favourite pitmasters and chefs and never miss a new recipe.

There’s also a lot of information about grill care and cleaning as well as a shortcut to help and support whenever you need it either through chat, a call or online.

OK, but what about our cooks?

We’ve cooked ribs three times and each one has been a huge success.

First of all, the grill is really easy to operate so it gives novices like us an easy way to cook some great food.

It also heats up pretty fast to the desired temperature so you can get cracking on whatever you’re cooking.

We learned the process can take several hours, in the case of our ribs it was a five-hour cook with the recipes giving us clear instructions on temperature, cooking time and other preparations.

And the Traeger Ironwood 885 did the rest.

During those long cook times we were able to get on with your life and check in through the app and make any adjustments if they were needed.

Our second rib cook was pork ribs purchased from a butcher which had already been coated with a rub before we cooked them for five hours and coated them with barbecue sauce.

More recently we cooked four racks of pork ribs which we coated with Traeger’s rub before placing him on the grill for three hours.

We then removed the ribs and wrap them in foil with brown sugar, butter and apple juice and cooked for another 90 minutes before applying the barbecue sauce and serving.

And we were able to monitor all of this through the app including how long was left in that part of the cook.

We were even able to monitor the wood pellet level as well through the app.

The Traeger Ironwood 885 has really ignited (get it?) or passion for BBQ and what was once considered too hard is now easily achievable thanks to this impressive grill. 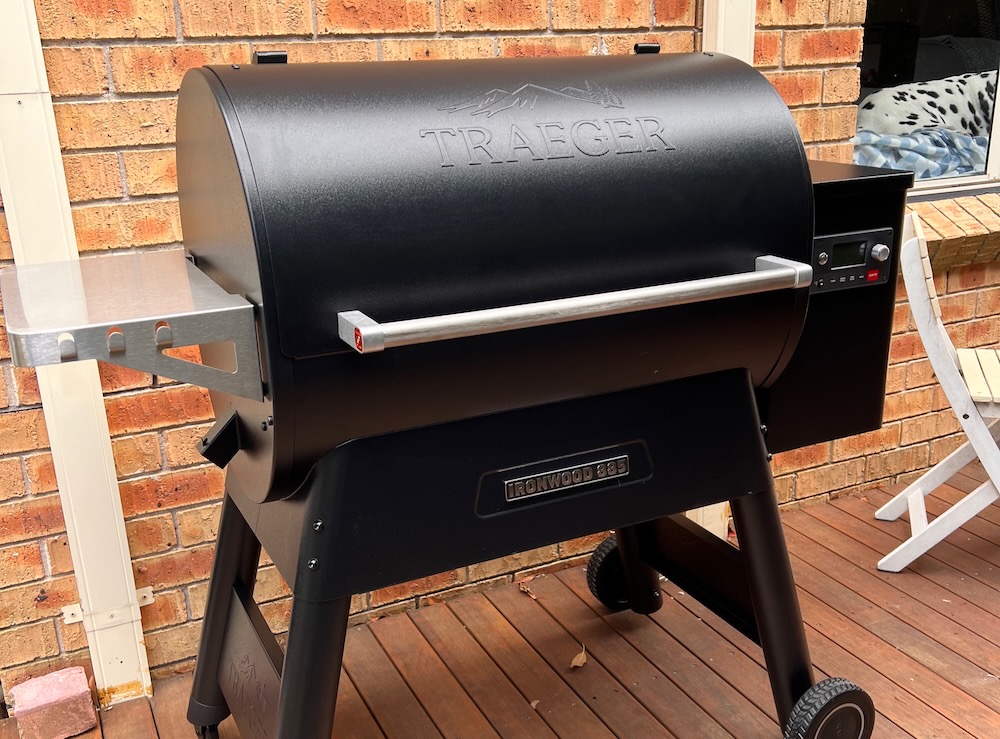 Whether you’re thinking of trying your hand at BBQ for the first time or if you’re a seasoned professional, the Traeger Ironwood 885 with wi-fi onboard and the companion app delivers across the board to help you cook like a true BBQ Pitmaster.

Emerging Tech in the Gambling Industry