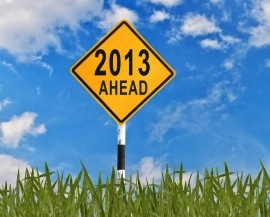 The tech products we can expect to see in 2013

2013 is here and there are some high expectations for the new technology and various products that will be introduced in the next 12 months.

Many of these new offerings will be on show at the International Consumer Electronics Show (CES) in Las Vegas which kicks off on January 8.

Technology can move pretty fast with innovation driven by the desire by companies gain the edge over their competitors.

Only time will tell exactly what 2013 will bring but here are some things we’re expecting to see:

2013 could be the year the glasses come off when it comes to watching high definition 3D content.

The company is due to showcase its new product at CES which can be used to view 3D glasses free on a TV, PC and tablets.

StreamTV Networks will also introduce a converter box that turns 2D into 3D which can also be viewed without glasses.

The smartphones and tablets of the near future could be dramatically transformed with the introduction of flexible screens.

Instead of a rigid piece of glass or plastic, the latest screens will be bendable like a piece of paper.

Samsung will display a 5.5-inch flexible display with 720p resolution at CES.

This technology opens up the possibility of wearable devices or products which can be rolled up when not in use.

The rumours of an Apple smart television have been around since before last year’s CES and show no signs of dying down.

It all started when Steve Jobs expressed a desire to revolutionise the TV with Apple’s design, connectivity and features in his biography which was penned by Walter Isaacson.

Since then there have been rumblings that Apple has been courting panel manufacturers to develop a product that would incorporate the popular Apple TV device to allow the TV to access a wide range of content from iTunes.

The rumour has been so strong and persistent, it’s on the radar of major TV manufacturers who are formulating strategies to maintain their respective market shares if and when the Apple smart TV hits the market.

At the end of January, Research in Motion – the company behind BlackBerry – will unveil the latest operating system that is optimised for a touchscreen device.

It could be the last throw of the dice for BlackBerry as previously dedicated customers and companies turn their back on the aging platform.

The company has tried and failed to produce a compelling touchscreen device ever since Apple changed the smartphone market with the introduction of the iPhone back in 2007.

There will be two devices unveiled on January 30 alongside the new BB10 software.

4K TVs, also known as ultra-definition, offer four times the resolution of full high definition TVs and is already being seen with models from LG, Sony and Samsung with more to come in 2013.

But one problem is the scarcity of 4K content.

The 4K TVs on the market right now have respectable upscaling abilities to convert content to near 4K quality.

But the launch of 4K camcorders in 2013 will give users an opportunity to create and share their own 4K content and showcase it on their large ultra-definition screen.

4K camcorders from Sony and JVC have already been announced.

LG and Samsung will be throwing down the gauntlet at CES with the introduction of their new range of smart TVs.

Over at Samsung, there was a teaser video (that was shot in Sydney) to preview its latest TV innovation.

The video doesn’t reveal any new products but there are suggestions it may have a completely new design and shape.

The dust has barely settled from the launch of the fourth generation iPad in October but there is already talk of the fifth generation device which could be released as soon as March.

The new device is said to be adopting the iPad Mini design and will be thinner and lighter than the previous model.

There is also strong speculation that Apple will release the iPad Mini with a Retina Display sometime in 2013.

Google has produced some respectable Nexus smartphones which, in the past, have been manufactured by Samsung, HTC and LG.

But after Google bought out Motorola we can expect to see a new hero device in 2013.

Google and Motorola are hard at work developing a new device – rumoured to be called the X Phone.

The new flagship phone will incorporate some innovative features and will take the lucrative smartphone battle right to Apple and Samsung’s doorstep.