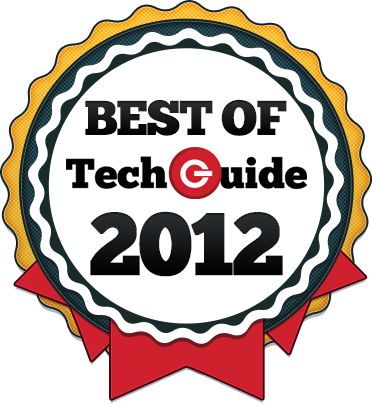 2012 has been a huge year in technology and here at Tech Guide we’ve seen and reviewed hundreds of products of all shapes and sizes.

We’ve decided to end the year by looking back and choosing the products that we thought were the best in their respective categories.

We’d also like to thank all of our loyal readers for their wonderful support in 2012.

It’s been a year that’s seen tremendous readership growth at Tech Guide and we look forward to that continuing 2013.

We have some exciting plans for the New Year and we look forward to you joining us for what promises to be an exciting ride.

It was a breakthrough year for Samsung in the smartphone market and the Galaxy S III was a real game changer for the company. The Galaxy III has a smart design, a sharp 4.8-inch screen, 4G compatibility, a number of handy new features, an excellent camera and a battery that lasts a day and a half.

It was Apple’s year on the tablet front with a strong lead thanks to the iPad but it was the smaller iPad Mini which stole the show in 2012. The iPad Mini is every bit an iPad but in a smaller package that’s easy to hold in one hand and attractive to users who considered the 10-inch iPad too big to carry around.

Samsung’s impressive Series 8 LED Smart TV set a new benchmark in terms of design, features, smart interaction, connectivity and content. And, of course, the picture quality was second to none.

Apple’s re-invention of its 15-inch MacBook Pro was breathtaking. Not only was the computer thinner and lighter but it included a Retina Display which was so sharp it should have come with Band Aids.

Canon’s EOS 650D is an affordable camera that can take superb shots which makes it appealing to users who might be new to digital SLRs. It has a hinged touchscreen and also shoots quality full high definition video.

The Sonos wireless music speakers are a favourite in the Tech Guide offices but the Sonos Wireless Subwoofer made us love them even more by adding amazing bass and a whole dimension to the listening experience.

TomTom is a market leader when it comes to producing GPS devices but in a market that’s being overtaken by apps the company decided to up the ante and offer something smartphones can’t – a 6-inch touchscreen for an even clearer view and easy to navigate menu system.

Tech Guide’s review of the TomTom Via 620

Navman MY and EZY range

Livescribe smart pens allow users to link whatever they write to whatever they hear along with the ability to link all of that together on their notepads. But the latest Sky smartpen from Livescribe has added wi-fi to the mix to allow integration with Evernote to make it possible to access their notes and anywhere and on any device.

Now Foxtel customers can enjoy their pay TV service anywhere on their iPad with the Foxtel Go app over wi-fi or 3G/4G. Users can access their favourite channels and watch live or catch-up later using the on-demand feature.

The iDTV accessory is actually a mini digital set-top box that turns your iPhone or iPad into a digital TV which can be enjoyed anywhere.

Tech Guide’s review of the iDTV

The record-breaking Call of Duty franchise continues the exciting first person shooter’s tradition with a game that’s set in the near future and provides a rollercoaster ride campaign and one of best online multiplayer experiences in gaming.

What better way to celebrate 50 years of James Bond films than with a box set of every film digitally remastered in full high definition Blu-ray with special extra features.