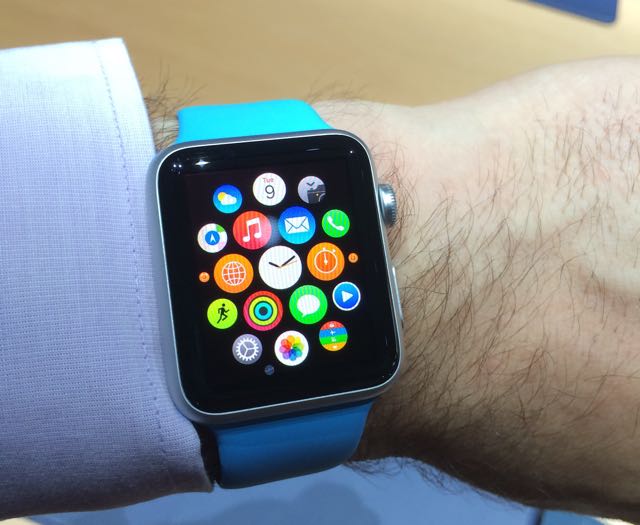 The shiny new Apple Watch looks very impressive in those crisp hi-res pictures and videos but in the flesh it’s actually even better.

Seeing the Apple Watch up close makes you appreciate the sleek design and the attention to detail that went into it.

It is basically a square screen with thick rounded edges. It is built from custom-made alloys – stainless steel and aluminium along with 18-carat gold and rose gold.

On the side is the digital crown that looks like the winder on a regular watch but is actually an interface to scroll through the menus. And it’s also the home button when you press it.

A smaller secondary button is your shortcut to your contacts to make it easier to make and receive calls and messages from Apple Watch.

The device also has a touchscreen but Apple recognises the gesture we use on the iPhone will not always work on the Apple Watch.

Depending on the app, the Apple Watch will either present an onscreen response or a command that can be controlled by the digital crown on the side of the device.

There are two screen sizes – 38mm and 42mm – that’s the vertical size not the diagonal size. We assume watch measurements are measured using the metric system instead of inches.

And the sizes will give a greater choice for men and women with women’s watches traditionally smaller than a man’s watch. That trend will continue with Apple Watch.

Size wise Apple has got it right. The problem we’ve seen with other smartwatches already on the market is they look too thick and chunky.

Not so with Apple Watch. The screen is big enough to display your information yet still small enough to look like a regular watch.

The screen can be customised with different watch faces, designs and even with widgets like weather

Apple’s excellent eye for design and style is clearly evident here with a number of band styles and colours to make it as attractive to tech lovers and style-conscious fashionistas.

The back of the watch has a number of sensors to read your heart rate and it’s also the place where a magnetic adaptor attaches itself to recharge the onboard battery.

As a fitness device the Apple Watch is showing it has some solid credentials because it can measure not only the quantity of your movements and also the quality.

It will also be able to encourage you to move more and sit less and even tailor cardio session for you using the Workout app.

Of course you’ll also get your notifications on your wrist like messages, calls and other in-app alerts through a discreet vibration on your wrist.

Apple won’t give you a keyboard to respond on the Apple Watch screen – it’s too small – but there will be suggested responses you can use as well as a number of adaptable emojis.

Or you can dictate your response by talking Dick Tracy-style into the device.

Of course, you can always pick up your iPhone and type out a response after being informed by Apple Watch that a message has come in.

The interface of Apple Watch is also easy to navigate with a feature called Glances which gives you a summary of the information you seek most frequently like the weather, navigation, stocks, the stopwatch and your calendar.

Apple Watch also has Siri in board so you can just as easily ask it questions as you would on your iPhone.

The Apple Watch won’t be available until early 2015 and it will be priced from $US349.

Now that Apple has entered the smartwatch market a lot more people will pay attention this already popular segment.

This is the sort of device that customers will want once they see it in person. Australian pricing has yet to be announced but expect to pay more than $400. Hopefully it might be $399.

*Stephen Fenech travelled to Cupertino as a guest of Apple