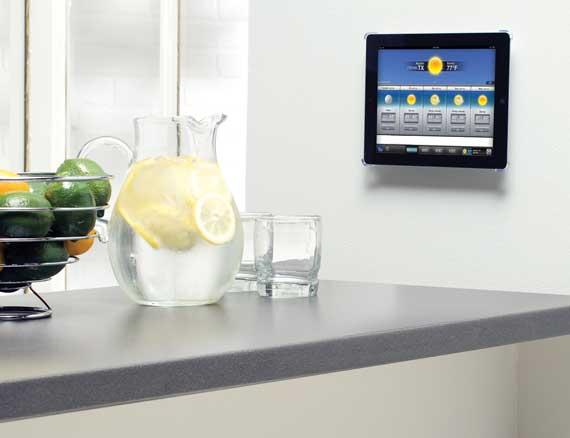 Sanus has released a new magnetic iPad mounting system which allows the device to be positioned anywhere in your home and easily accessible.

The Sanus iPad mounts provide several options to suit your needs and your lifestyle.

It all starts with the polycarbonate case which can snugly fit the iPad 2 as well as the third and fourth generation versions.

The case has a pattern on the back to make it easier to grip when it’s in your hand and also has a MagFit link in the centre so it can securely attach itself to the corresponding mount.

The case also has room for users to still use their Apple Smart Covers so users have complete protection of their iPad on the move.

With the mounts there are a few different options starting with the basic on-wall circular mount which can be attached to any wall.

Once installed the iPad case can be magnetically attached and used while still on the wall.

With the iPad having so many uses in the home, including as a remote control and control panel for home theatre and home automation systems, the Sanus mounts are ideal for keeping the devices within easy reach.

The case on its own, because it has MagFit centred on the back, can also connect to most metal surfaces like the refrigerator without the need for an additional mount.

But it doesn’t end there. Sanus has also created an adjustable arm mount so the iPad can be positioned on the wall, on top of a desk or under a cabinet.

The arm mount can be extended and positioned in a number of ways while the magnet at the end of the arm attaches to the Sanus case.

A pivoting connector on the mount at the very end of the arm means the iPad can be tilted in any direction to give users even more freedom to position the device exactly how they want.

The under cabinet installation is handy for those users who want to use their iPad in the kitchen whether they are following a recipe or using the screen to entertain themselves while they cook.

The arm can also be attached to a table-top stand so it can be utilised on a flat surface or a desk as well.

The Sanus mounts are available in several versions.

The VTM7 ($49.95) version has the Sanus MagFit case on its own while the VM6 ($69.95) includes the MagFit case and two circular magnetic mounts.

The Sanus VTM5 ($129.95) is the under cabinet/wall extension version and includes the MagFit case and the mounting hardware.

Users can also move up to the VTM1 ($149.95) which includes the MagFit case, the mount hardware and desktop stand.

And the beauty of the system is that several can installed in your home and the Sanus MagFit case will work on every one of them.

It’s also a handy solution of there are more than one iPad being used in the home.

The Sanus iPad Mounts will be available this week through Harvey Norman stores.

The top rating Tech Guide podcast is back with episode 23