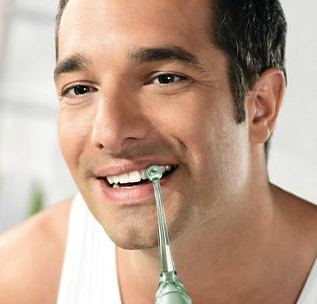 We’re always being told by our dentists that brushing isn’t enough – we also need to floss. Philips has just released the Sonicare AirFloss – a new gadget that can make it easier and more effective.

Using microburst technology, the Sonicare AirFloss shoots water at high speed between your teeth to remove anything lodged in between and assist with plaque removal.

The device has a long thin neck and a guidance tip that helps find the spaces between your teeth.

There is also a small water reservoir that only needs a teaspoon of water to provide two full cleaning sessions.

The device combines rapid bursts of air and water droplets to flush out food particles, bacteria and plaque from the spaces between your teeth which are inaccessible with a brush.

Sonicare Airfloss’s action feels like a puff of air in your mouth. During our testing we found the device was effective at removing particles from between our teeth.

When using regular floss string we were always left with bleeding gums but the Sonicare AirFloss offered a gentler solution to achieve better results – and no more bloody gums.

The rechargeable device can run for two weeks on a single charge.

Dentists are always reminding us about the importance of flossing for healthy teeth and gums.

Philips research has found 25 per cent of Australians never floss while 43 per cent only floss once or twice a year.

And the main reasons why most don’t floss are because they think it’s a hassle and they don’t know how to floss properly.

During consumer testing 86 per cent of users found the Philips Sonicare AirFloss easier to use than string floss.

The device is quite light and easy to use. It’s nowhere near as fiddly as using traditional string floss and a lot quicker to clean your whole mouth.

The guidance tip is also easy to keep clean so it can also be used by several members of the family.

If the difficulty of regular flossing is discouraging you from flossing and improving your oral health then the Philips Sonicare AirFloss could be just the solution.

The Philips Sonicare AirFloss is available now and is priced at $169.95.