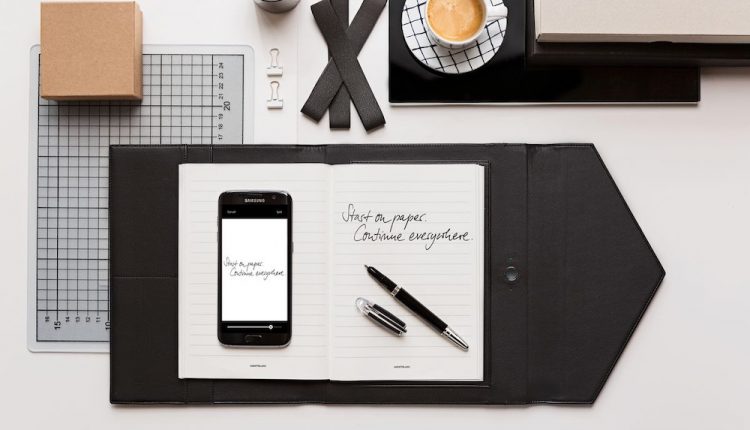 The Montblanc Augmented Paper brings together the tactile writing experience and digital convenience beautifully so you can truly enjoy the best of both worlds in luxury.

In this digital world we live in, more people type on glass than write on paper but the Montblanc Augmented Paper has managed to combine the digital world and the tactile act of writing.

Montblanc is known the world over as one of the finest producers of writing instruments and has a vested interest to keep people writing.

Their customers who shell out hundreds and sometimes thousands of dollars for a Montblanc pen certainly want to keep writing.

The Montblanc Augmented Paper is an impressive piece of technology that allows users to write on paper in this elegant leather folio with those notes from each pad saved as a digital file on the companion Montblanc Hub app on your iPhone or Android smartphone.

The replica of what you wrote on the included pad or your own paper used inside the leather folder is what you see in the app.

The Montblanc Augmented Paper comes with an Italian full grain cowhide leather portfolio which houses the technology that digitises whatever you write.

It has a luxurious look and feel and just exudes quality from the moment you put your hands on it. 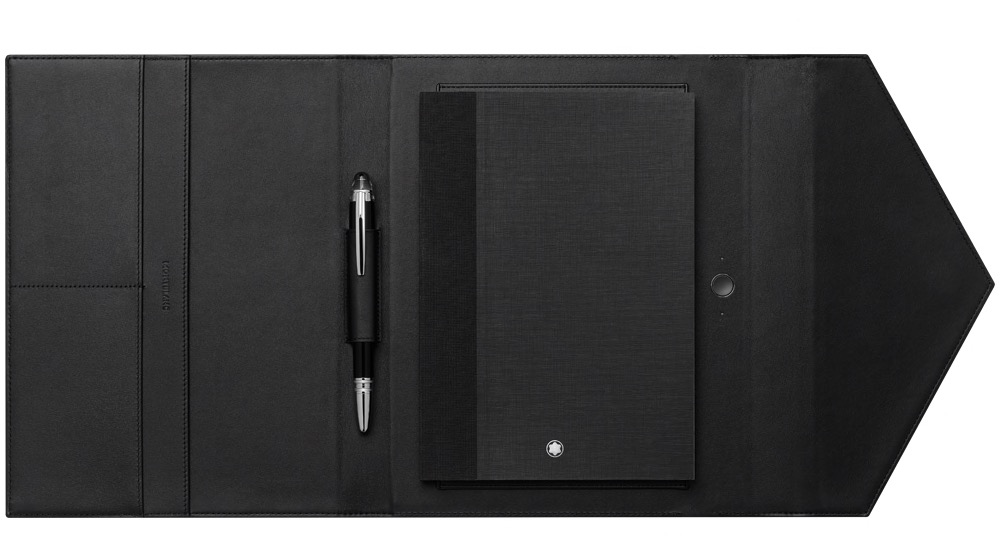 Also included is the Montblanc StarWalker Ballpoint Pen which also has some tech onboard.

The pen itself feels great in your hand with a nice weight to it. Writing with it was a pleasure.

The pen connects to the digital slate built inside the folder using EMR (electromagnetic resonance) which can record every pen stroke that you put on the page and recreate it digitally within the app. 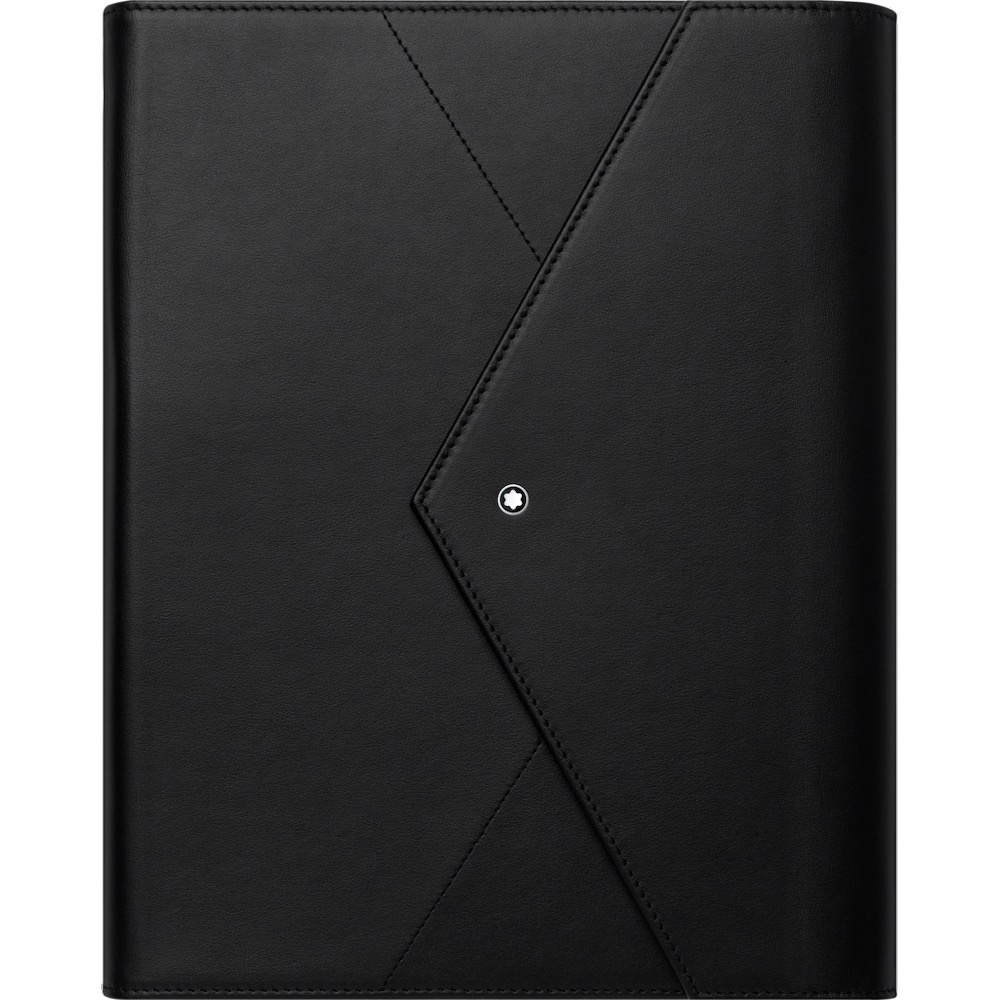 There is a pad included in the set but you can use any A4 paper or A4 pad you like as long as it’s lined up inside the leather portfolio.

The Montblanc Augmented Paper has a small charging port to keep the internal slate charged.

There’s a small button on the left of the pad which is the on/off/pairing button and also the button you press when you’ve filled the page you’re writing on so it signals to the app it is ready to be uploaded.

A split second later you’ll see a digital version of the page within the app.

The stored page can also be drawn and written on if you wanted to supplement the note within the app. 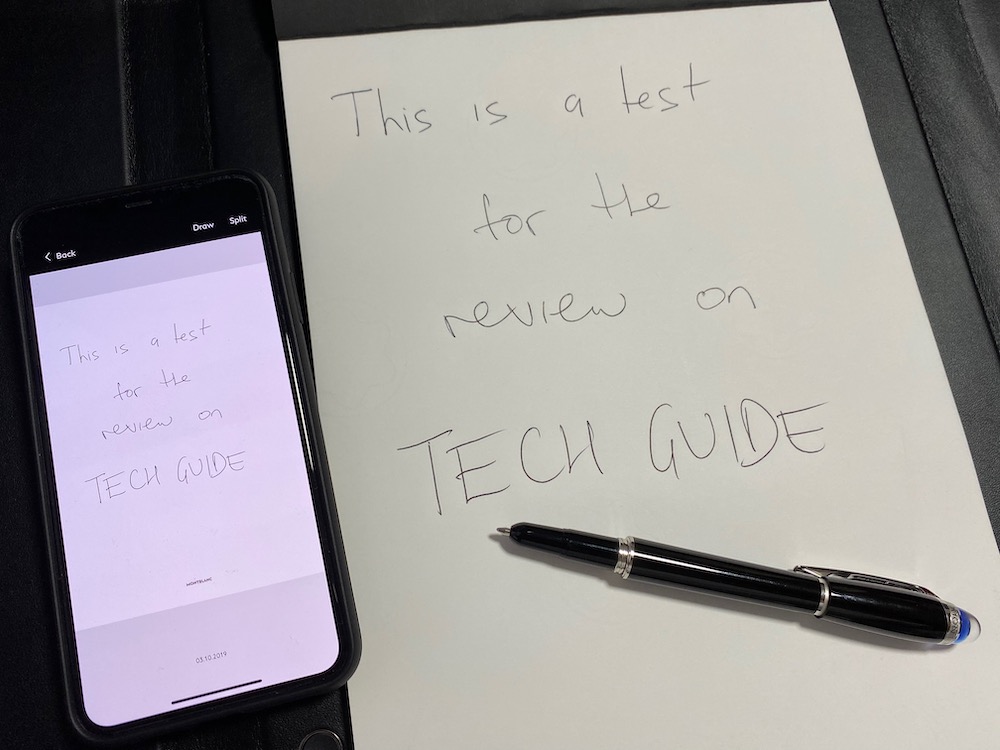 What’s really impressive is live mode which can mirror what you are writing on the page in almost real-time in the app.

That means, you will see the words appear within the app a split second after it has been written.

There are numerous ways you can use this feature which shows exactly what you’re writing as you write it.

You can live stream your notes.

The Montblanc Augmented Paper reminds us of the old Livescribe pen that used special paper to track what you’ve written all drawn before being transferred to your phone or computer.

With the Montblanc Augmented Paper, it’s the folio that does the heavy lifting.

All you need is to keep it charged rather than having to buy special paper each time. 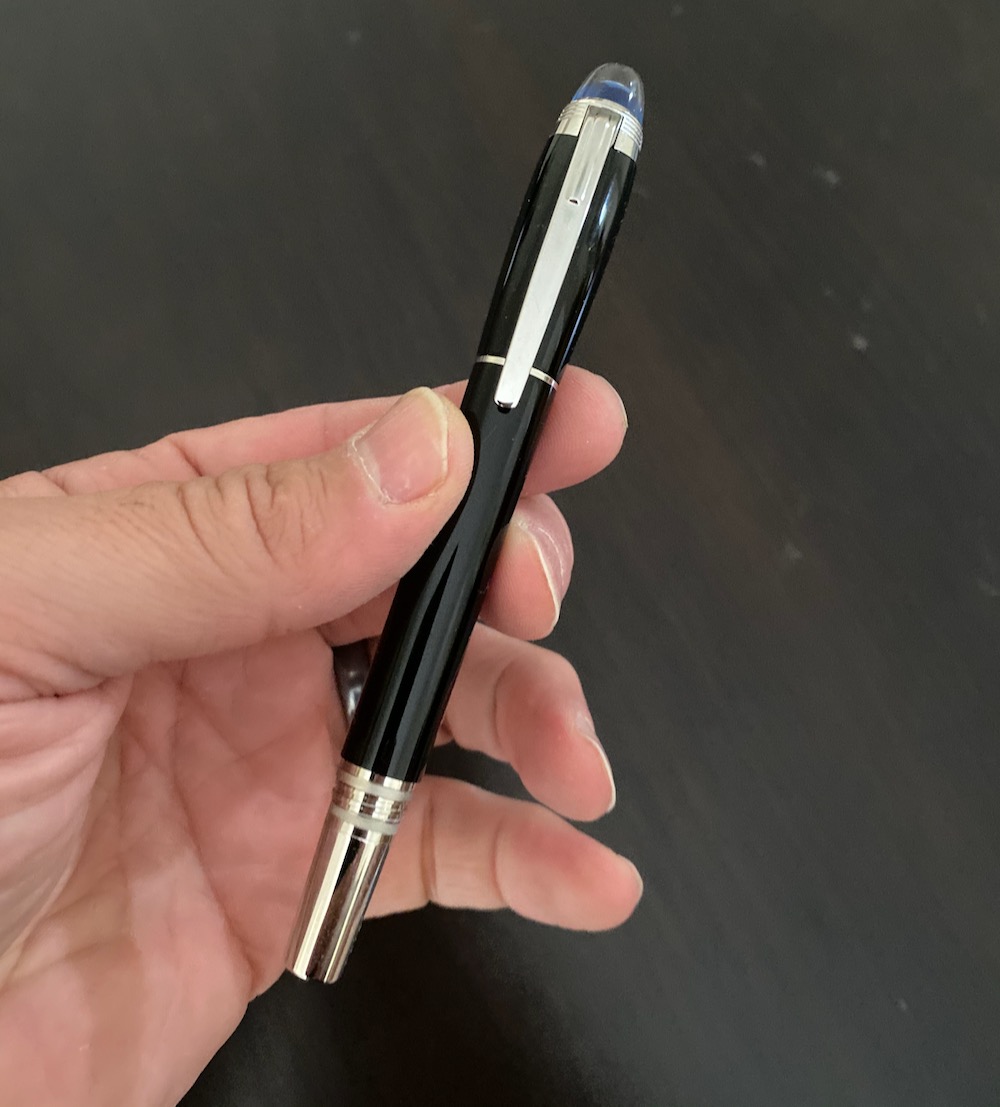 Pairing to your smartphone is easy – the app takes you through all the steps and links your phone the folio. There’s no need to connect the pen separately.

Now let’s talk about the app.

The Montblanc Hub is where your notes are stored. It’s also here where you decide what to do with those digital notes.

The app could be more intuitive and finding features were a little difficult. 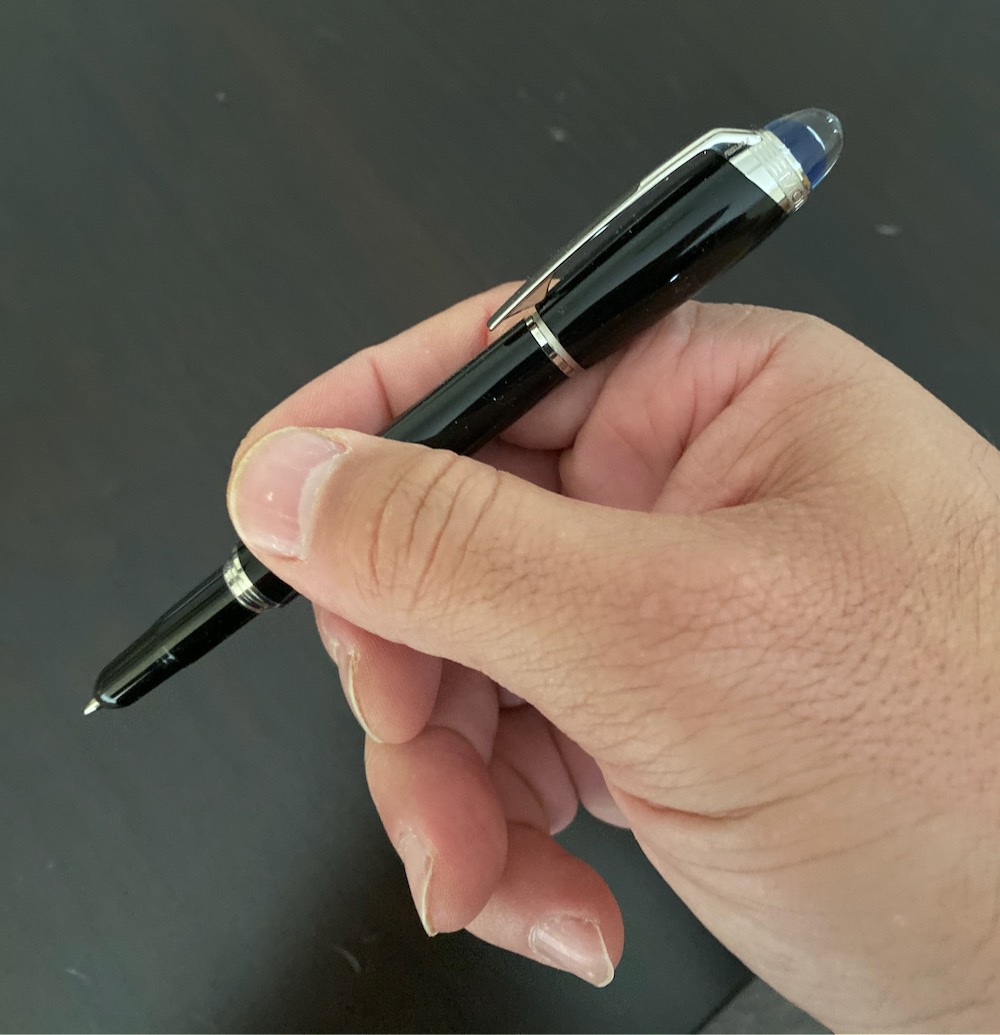 For example, being able to convert your written notes to text. We thought it couldn’t be done but a little more digging and we found it.

When viewing a note, the only options are Draw and Split.

Split lets you go back and access a slider and scroll back through the writing of your document – it’s like watching the document being written in reverse.

Here you have the choice of saving different parts of the notes so you can separate the text into different documents.

The other option is Draw and it’s here where most of the features are located.

As its name suggests, you can draw and add more text to your imported note. 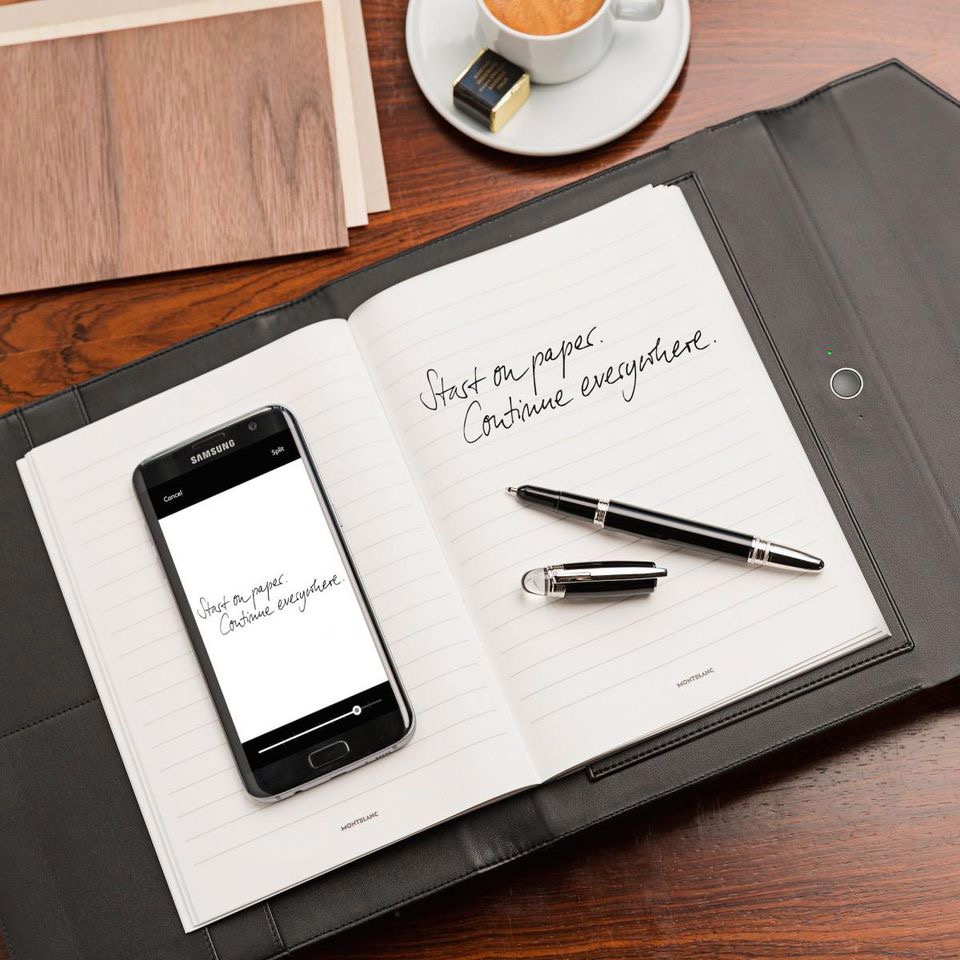 But from here you can also access the Export menu and your choices are export as text, as a JPG, PNG or PDF.

There was no way to export from the main screen.

If you write a lot of notes, unfortunately you can’t group them in folders but you can search for words or assign tags.

In terms of the Montblanc Augmented Paper itself – it is a luxurious product made of fine leather that’s available in four colours – python printed, black, blue and red

But you’ll need to take care of it. It has to be handled with care because you might scratch or scuff the leather if it’s bouncing around in a briefcase or backpack.

It comes with a cloth bag which can be used to wrap it and protect it while you’re on the go.

The Montblanc Augmented Paper is $1,095 with the bulk of that for the included Montblanc StarWalker pen which can cost as much $800 on its own so you’re actually getting some value here when you think about it.

The Montblanc Augmented Paper brings together the tactile writing experience and digital convenience beautifully so you can truly enjoy the best of both worlds in luxury.