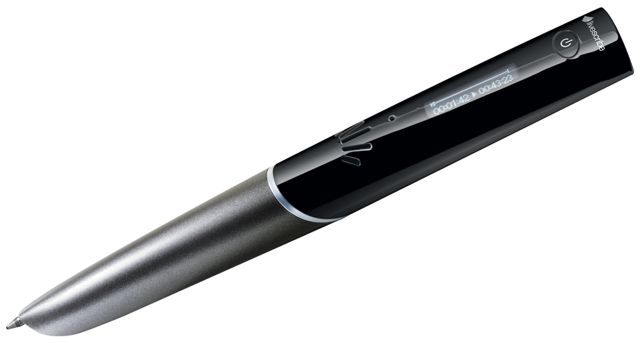 The SmartPen from Livescribe, which allows users to record everything it writes and hears, just got even smarter with the introduction of a new wi-fi model called Sky.

Sky is the world’s first digital pen to incorporate wi-fi connectivity along with cloud services to allow your notes and audio recordings to be accessible on other devices and computers.

The Livescribe smartpens have been around for a little while starting off with the Pulse and then following it with the Echo.

They can record all of your notes and the associated recordings by using the smartpen on special paper within Livescribe notepads, folios and pads.

Later users can simply tap on any part of their notes to access the associated audio recorded at that point.

Your smartpen’s written notes become a visual index to what was recorded with the smartpen’s built-in audio recorder. This note with the associated recording is called a Pencast.

The product is handy for anyone who needs to take written notes and refer to them later.

It’s perfect for taking the minutes of a meeting, lectures, interviews and anything else that requires note taking of any kind.

Now with Livescribe’s new Sky wi-fi smartpen it can take all of those handy features and extend it to the cloud using Evernote.

So now you can access to all of your notes, your ideas and your words anywhere and anytime.

Another advantage of having easy accessibility to your smartpen’s notes anywhere is that your notes are searchable by tags, titles, keywords as well as by your handwritten notes themselves.

This cloud service also makes your notes even easier to share either publicly or privately with friends and colleagues.

The Sky smartpen looks similar to the previous model Echo and has a small display so the user can see the device’s status, battery levels and other information.

It is a little chunkier than a regular pen because all of the technology built inside it but it is still quite comfortable to hold and to write with.

And like the previous generation of pens there is a small camera sensor above the pen’s nib which is what converts your notes to digital format when written on the special Livescribe pages which are covered in tiny dots.

Users are also able to execute commands by tapping the pen on various icons on the note pad’s cover.

For example, tapping the wi-fi on/off icon with the pen switches the wireless function on or off.

Each time a user wants to start a new note, they simply have to tap the small record icon which can be found at the bottom of every special note page.

WRITING ON A TABLET v WRITING WITH A SMARTPEN

Livescribe’s own research indicates that even tablet owners – more than 50 per cent to be exact – still want to write notes and bring them into the digital world.

The Sky smartpen allows users to take notes and then have complete access to them anywhere.

Some tablet users have even bought a stylus so it is easier for them to take notes.

But despite these notes being recorded on a tablet it wasn’t a straightforward task to share them with your other devices.

Livescribe’s Sky wi-fi smartpen can now give users the best of both worlds – the convenience of writing on a note pad as well as the ability to push these notes and the associated audio to the cloud to access anywhere and anytime.

Evernote has more than 43 million subscribers around the globe and Livescribe has formed a partnership to allow customers a seamless solution to access their notes.

The Sky wi-fi smartpen can be set to easily connect to Evernote (free) and Evernote Premium and push the latest notes wirelessly to the cloud service.

Once on Evernote every note taken with a Sky smartpen is searchable and is easy to organise.

Every Sky wi-fi smartpen customer can easily link their pens and use the Evernote service for free.

The 8GB Sky smartpen model includes a free one-year premium Evernote account (valued at $45 a year) that allows users to upload up to 1GB of notes and content per month to the online service.

With wi-fi on board the Sky smartpen, it has the ability to connect not only with the cloud but also with other wireless devices like smartphones and tablets.

It if for this reason why Livescribe has announced the pre-releases of the Mobile SDK (software developer kit) to allow the development of mobile applications which will work directly with the Sky wi-fi smartpen.

Developers will be able to integrate a real time connection with their apps with users able to view Sky wi-fi smartpen’s handwritten notes as they are written on a linked smartphone or tablet device.

Other apps will allow users to annotate digital documents including PDFs and Word documents.

The Livescribe Sky wi-fi smartpen is an essential tool for users who need to link their notes and recorded audio to the digital world.

Taking notes with a pen and paper is still favoured by most people, even those who already own a tablet, and the Sky wi-fi smartpen provides the ease and precision of writing on paper with the added ability of viewing later on digital devices.

Livescribe has proven once again that the pen is now more powerful than ever.

Mobile phone complaints to Ombudsman increase by nine per cent