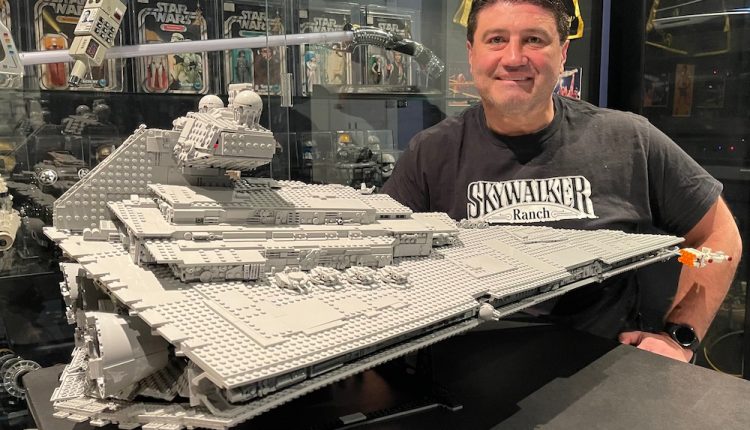 The Lego Star Destroyer is an epic build that will test the skills of even expert level Lego lovers. But all that hard work is worth it because the result is breathtaking.

We’ve never reviewed a product we had to build ourselves before but that’s exactly what we did with the giant Lego Star Destroyer which has 4784 pieces, is 1.1m long and includes an instruction book thicker than the Lord of the Rings.

The Lego Star Destroyer (Item number 75252) comes in quite a large box with five other boxes inside containing more than 38 bags of pieces and a hefty ring bound instruction book.

This is the Devastator Star Destroyer which is seen in that iconic first shot of the original 1977 Star Wars film as it rumbles over the top in pursuit of Princess Leia’s Tantive IV ship.

The kit is large and intimidating but I took this on as a lockdown activity – something to do while not looking at another screen.

I built it in my home theatre room which is already decked out with Star Wars collectables – and this was also where the Lego Star Destroyer would end up being displayed.

I set up six containers to accommodate the pieces I needed to work with to complete each section.

The Lego designers who created this kit did an incredible engineering job with this build which includes a support stand, internal support structures and panels which click into place on the outside.

The precision on a ship this size is amazing. And it has to be so it can hold together and stay in one piece. 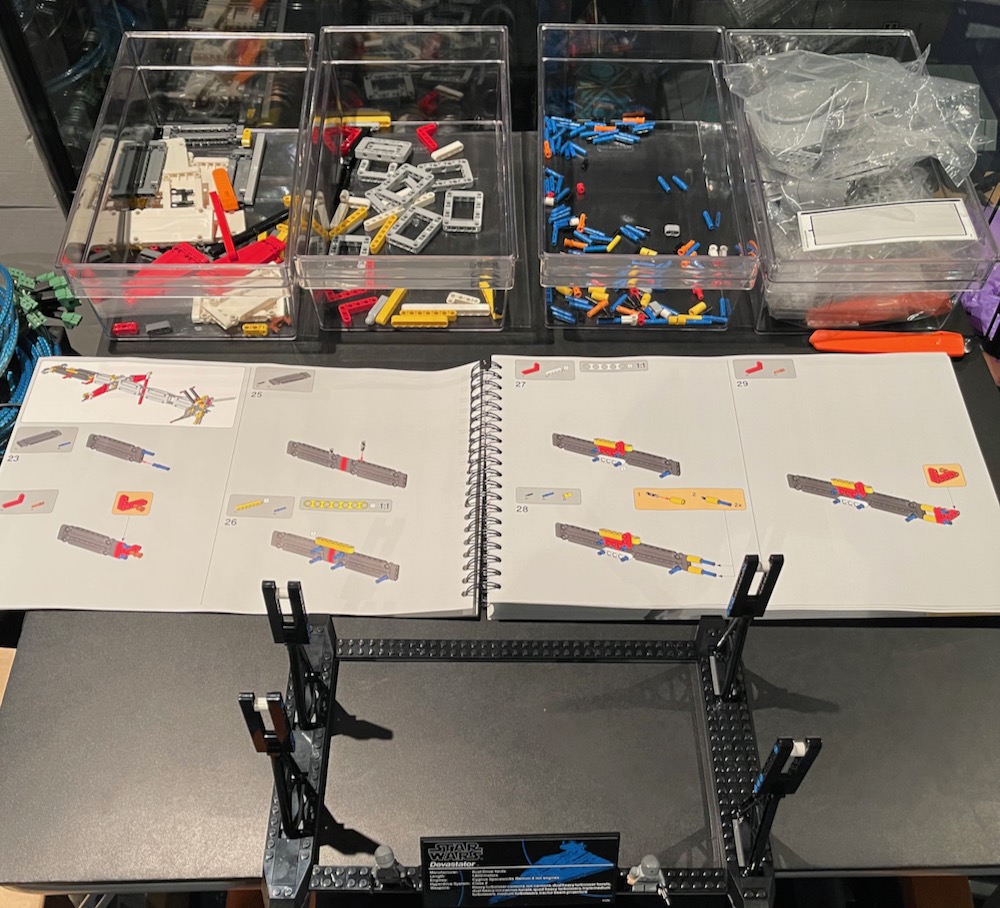 The build starts with the base the ship will rest on so, when finished, it will look like it’s floating.

The next step is creating the super structure with a solid central shaft and beams that form the sides and the back of the vehicle.

This is followed by the long narrow sides of the ship which are then detailed with hundreds of tiny shapes and pieces and flat bricks.

Then it’s on the rear left and right bottom panels which click into place and are pinned precisely in position.

We found the rear engines the trickiest and most delicate part of the build and it took a few recaps to get it exactly right so it would fit together properly and hold in place.

That’s the thing about all Lego sets – even being out by a single stud can make a difference and the parts just won’t fit together.

There are also two sections that fit on the base of the ship including two landing bay areas which includes a tiny Tie Fighter. 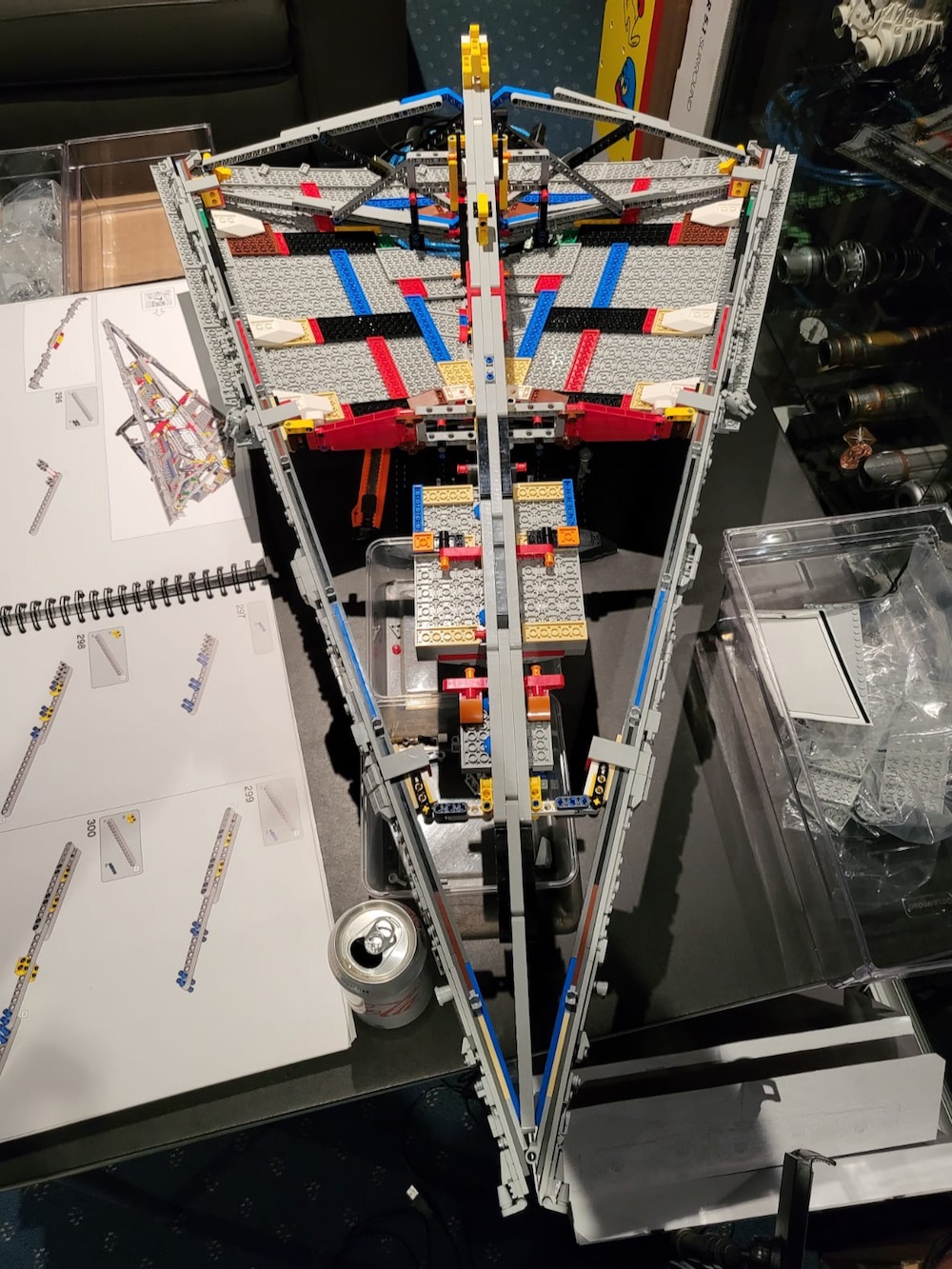 The bridge and top section are next on the list followed by the remaining top panels which all fit precisely fitted together and clicked into the central beam and edge clips.

The final part of the build is lovely touch – the Tantive IV which is held by a long transparent piece so that appears to be flying beside the ship.

The impressive thing about the build is the amount of detail and exterior embellishment that makes the build look more like the ship in the Star Wars film than bunch of Lego bricks stuck together. 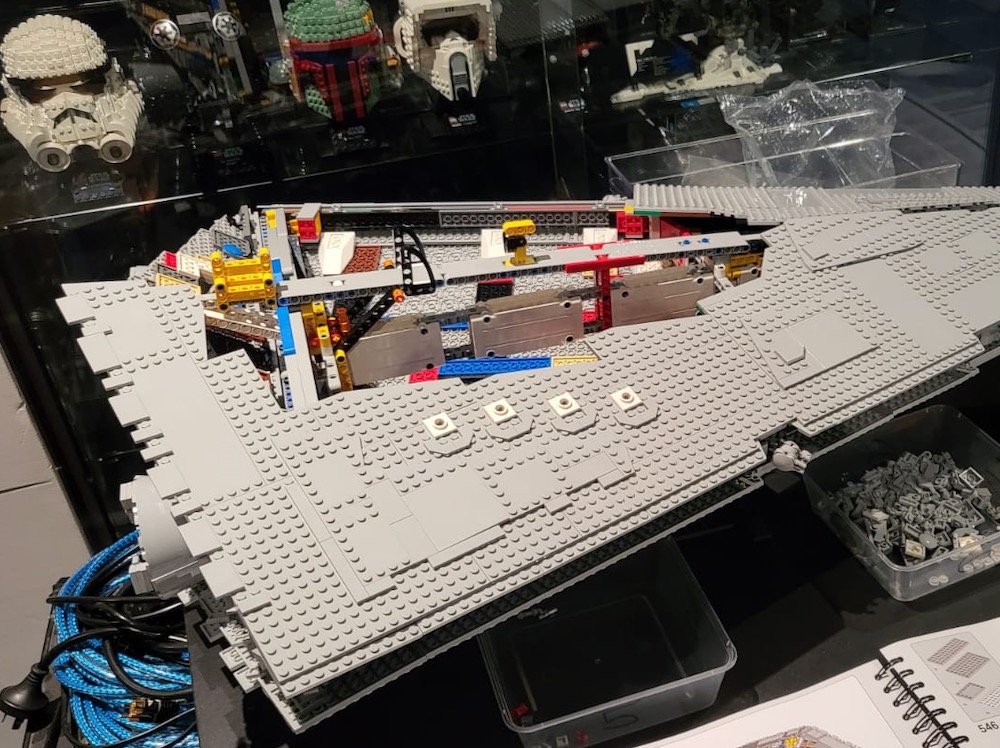 This intricate work was the most time consuming part of the build.

Building this large panels was also a challenge because they had to be exactly right so they could fit together on the frame. 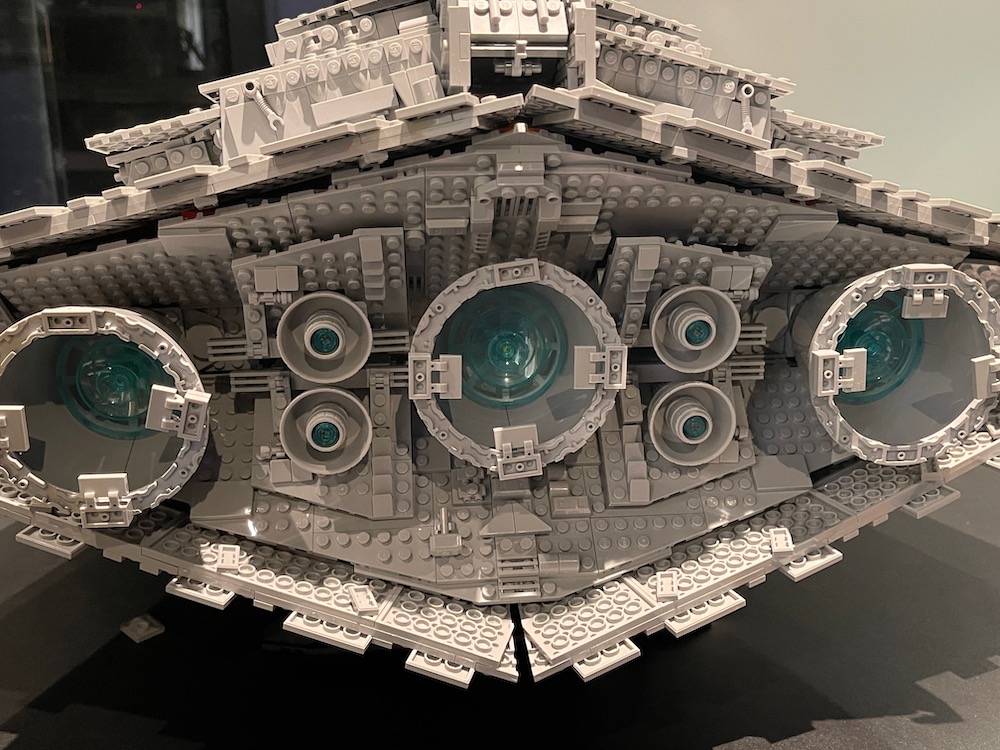 The large instruction book is well laid out so you can easily see how the pieces need to be fitted together and exactly where they then fit on the larger frame.

Our build method was to have numerous plastic containers to sort the larger pieces from the smaller pieces. 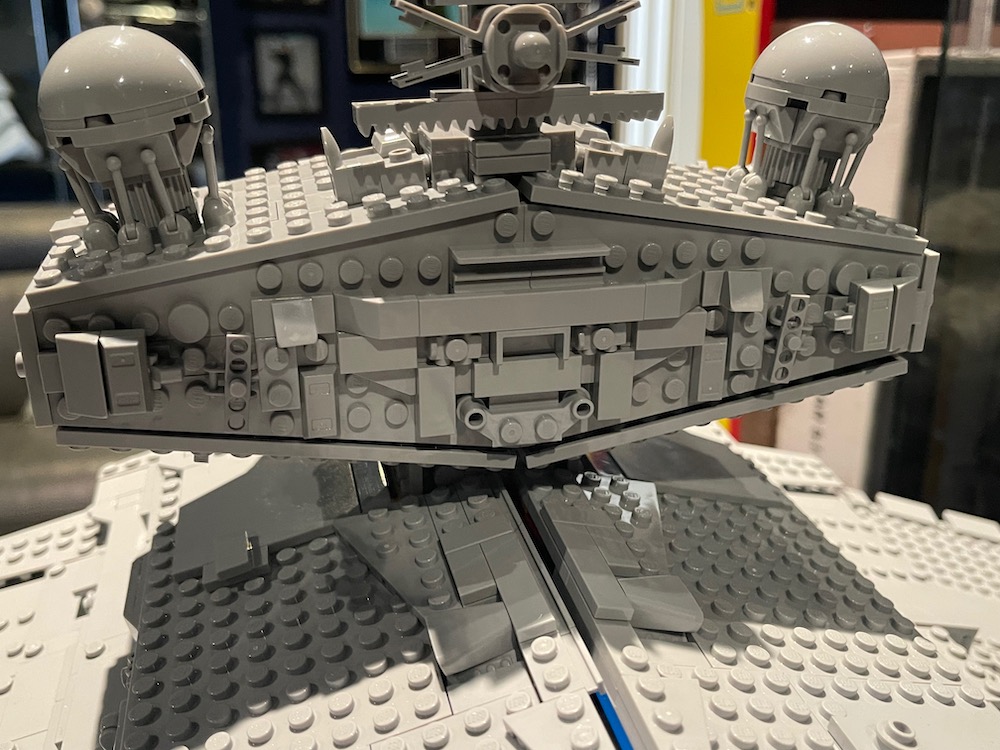 Each bag of pieces sometimes contained a smaller bag of tiny pieces and we separated these into different bins.

And this way we didn’t lose a single piece. 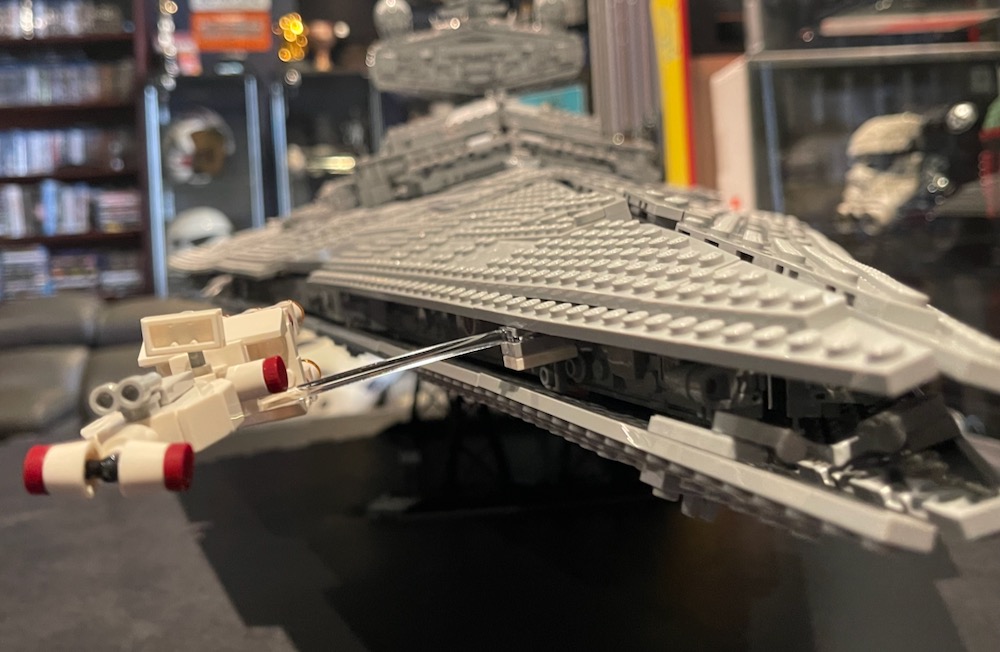 The Lego Star Destroyer is a huge build and it’s also not cheap at $1,099.

This an expert level project so it’s really not suitable for young children – they’ll find it too hard to build.

It’s definitely designed for the Lego enthusiast who also happens to be a huge Star Wars fan – and that’s exactly what I am. 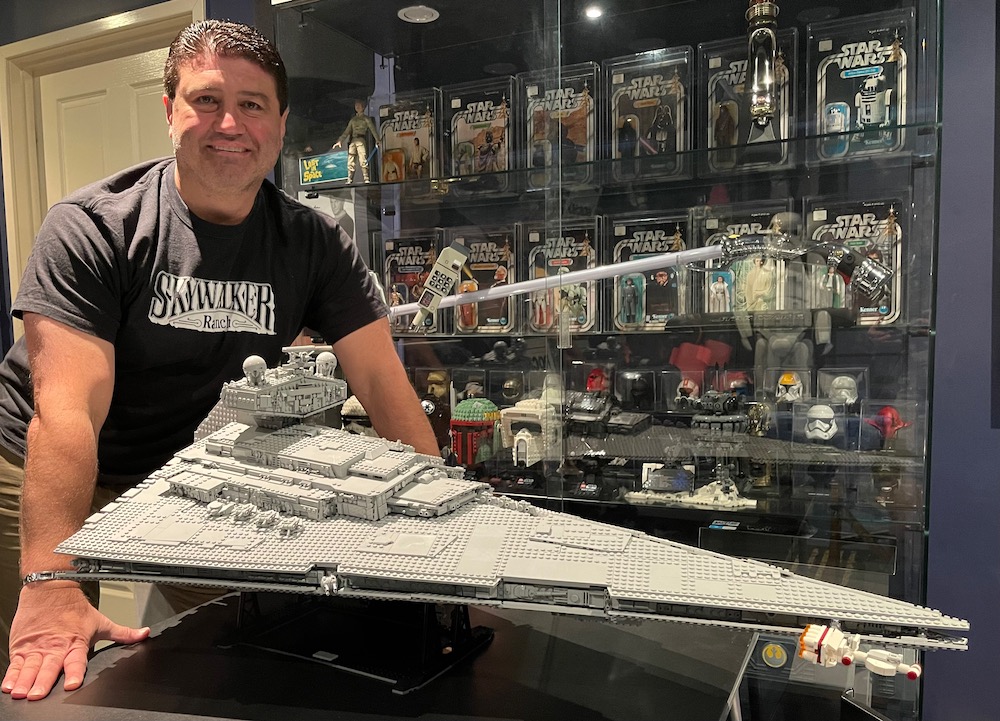 The Lego Star Destroyer is an epic build that will test the skills of even expert level Lego lovers. But all that hard work is worth it because the result is breathtaking.

A guide to the best new casinos