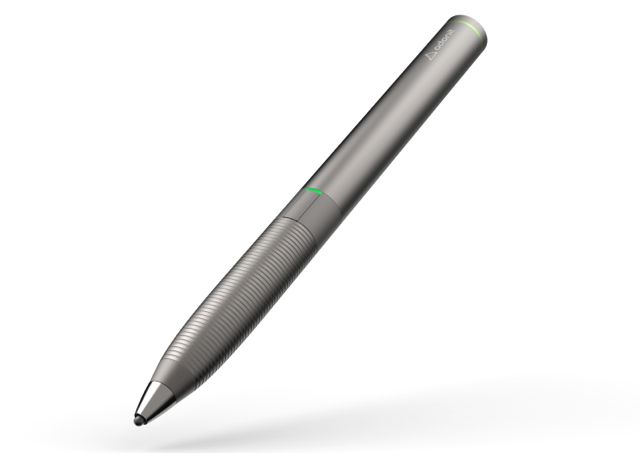 A usual stylus for a tablet or smartphone has a large nib and is designed mainly for navigating, not writing – but the Jot Script is not your usual stylus.

Jot Script is a stylus designed for iOS – iPhones and iPads – and it looks just like an ordinary pen.

And unlike the other stylus products on the market with nibs 6mm wide, the Jot Script has a 1.9mm tip to allow users to write notes on their iOS device as easily as they would on a piece of paper.

It uses PixelPoint technology to make the Jot Script feel like a real pen. In your hand it feels no different to an ink pen in terms of size and weight.

There is even the same level of nib feedback when writing on a screen so you can apply different levels of pressure.

The device is branded as the Evernote Edition because the primary app the Jot Script will work with is the app Penultimate by Evernote.

It will also work with other apps including GoodNotes, ZoomNotes, Noteshelf, Note Plus and Notetaker HD.

The stylus connects directly to the iOS device using Bluetooth 4.0 to integrated apps like Penultimate.

There’s also no need to look for the device in the list of devices to pair in the Bluetooth settings so you can be writing on your iOS device within a minute or two.

With the thinner nib, Jot Script makes it easier to write pages and pages of detailed notes.

Taking advantage of Penultimate’s Zoom function makes it possible to fit even more notes on a single line and on a single page.

In this mode, the screen scrolls naturally to keep up with your writing to maximise the amount of information you want to put down on one page.

Writing is responsive and smooth and the notes and drawings created with the Jot Script are also sharp and detailed.

In our testing we used the Zoom mode as well as the regular mode. The Jot Script was still able to write our notes even while we had our wrist or the base of our palm on the iPad’s screen.

The only evidence that our wrist or palm had been on the screen was a couple of black dots from our contact with the display.

There was an occasion when the letters or word we wrote disappeared and we had to write the word again but this was a rare problem.

Jot Script is powered by a single AAA battery and is available now for $119.99.