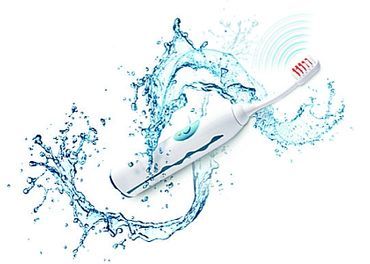 If you though there is no technology in a toothbrush you’d be wrong. The Emmi-Dent 6 electric toothbrush actually uses ultrasound to keep your teeth clean.

Developed in Germany, the Emmi-Dent 6 Professional is able to provide a deeper clean using ultrasound instead of an abrasive action like other toothbrushes.

With the Emmi-Dent 6’s ultrasound there are 96 million oscillations per minute which can destroy germs and bacteria not only on your teeth but also in between teeth in areas where even flossing can’t reach.

If you’ve used an electric toothbrush before and give the Emmi-Dent 6 a try, you will find it is a lot gentler on your teeth yet still provides a thorough clean right down to the gums.

In fact you might not even think it’s doing anything at all but it’s the ultrasound technology that’s doing all the work.

For the Emmi-Dent to be even more effective you need to hang in there and brush for a little longer – up to five minutes. With a regular electric toothbrush you’re only required to brush for a couple of minutes.

In our testing of the product we found there was hardly any gum bleeding when compared to using a regular electric toothbrush with a high-speed brush.

This gentler approach of the Emmi-Dent 6 with ultrasound is also useful for anyone with braces, crowns or dentures.

And Emmi-Dent 6 won’t abrade veneers but still keep them clean and shiny.

The device itself isn’t going to win any design awards – it has a plastic feel and fairly plain outer shell. But what it lacks in looks it certainly makes up for with thorough yet gentle cleaning

For the best results, the Emmi-Dent 6 is supported by a specially formulated nano-bubbles toothpaste which doesn’t contain any abrasive particles because the ultrasound does all the cleaning.

The Emmi-Dent 6 ultrasound toothbrush comes with a charger, two brush heads, a 50ml tube of ultrasound nano-bubbles toothpaste and an adaptor to connect to Australian power points.

The Emmi-Dent 6 Professional is priced at $235 and is available now.

MYO lets you control your devices like a Jedi master