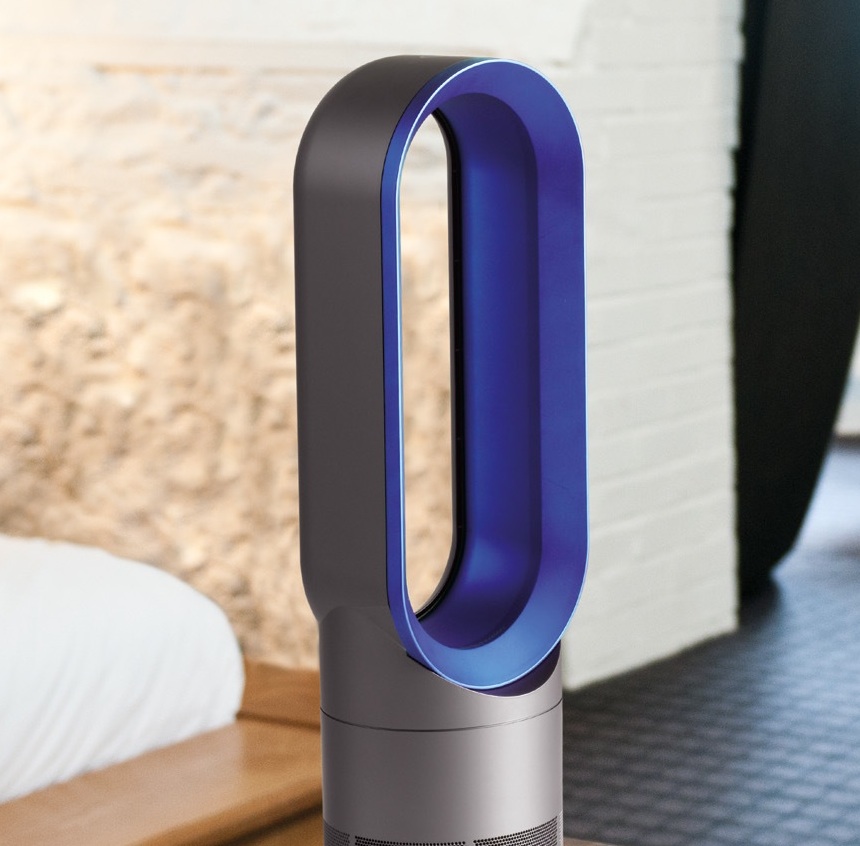 The latest Dyson creation has combined a heater and a fan into a single product so it can be used all year round.

Unlike conventional heaters which have limited settings and limited reach, the Dyson Hot+Cool can be set at temperatures between 1 and 37 degrees Celsius.

It can also monitor the room temperature by measuring the surrounding air and, if it detects a drop, the Dyson turns itself on again.

The Dyson Hot+Cool is only 58cm high and weighs just 2.57kg so it can sit discreetly in the corner of the room to heat and cool.

It also had a very small footprint so it can fit virtually anywhere on the floor or on a surface like an entertainment unit, desk or table.

The design of the Dyson Hot+Cool follows very closely behind the Dyson Air Multiplier – a bladeless fan which draws in air from grilles around the base and sweeps it out across the open oval-shaped surface into the room.

The technology used under the Dyson Hot+Cool’s elegantly exterior is similar to a turbocharger and jet engine and sucks in air and accelerates it through a 2.5mm aperture within the loop amplifier’s airfoil-shaped surface.

The surrounding air is also drawn into this air-flow and amplifies it by up to six times.

When it comes to heating the Dyson Hot+Cool passes the air drawn in from the base over two heated ceramic stones within the loop before it is sent back out the aperture.

The advantage the Dyson has over conventional heaters is the fact being able to heat up a room quickly thanks to the air-multiplying ability.

What is also eliminated is the off-putting burning smell given off some normal heater – this comes from the dust particles in the air being burned by the heater’s element.

On the safety side, a conventional heater could easily start a fire if it is tipped over on its side.

Not so with the Dyson Hot+Cool – it has low external surface temperatures and has been engineered to shut itself down if it is knocked off balance and falls onto its side.

The product can be controlled with a small remote control which attaches to the top of the loop with a magnet when not in use.

The only downside we could find with the product was it was a little noisy when used in a small room even on the lowest setting. It’s not chainsaw loud but would have been nice to knock off a couple of decibels.

The Dyson Hot+Cool is a remarkable piece of engineering that will come in handy at any time of the year.

Instead of buying both a fan and a heater you can kill two birds with one stone with the new Dyson Hot+Cool.

It will be priced at $579 and become available from April 1 in two colours – iron/blue and white/silver.