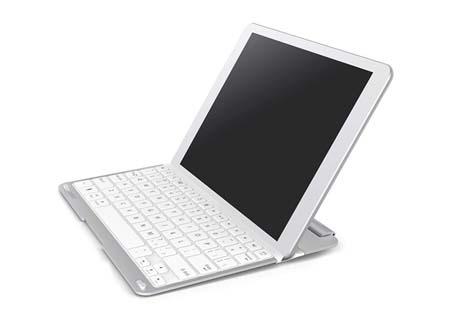 Belkin has released new Qode case/keyboards for the iPad Air to not only protect the Apple tablet but to also put a full size keyboard at your fingertips.

Both cases are slim and lightweight so it’s really easy to use with the iPad Air on the go.

And the keyboards have six rows of well-spaced keys to make it easier for users to create and edit documents anywhere.

The Belkin Qode keyboard case is made from sturdy anodised aluminium so it’s strong yet light.

It connects wirelessly to the iPad Air via Bluetooth and is just 4mm thick.

The iPad itself is held securely in place with two magnets once it is inserted into the slot above the keyboard.

The neodymium magnets hold the place to ensure the tablet won’t move or slip even when you’re typing in your lap.

The iPad Air can be positioned in either landscape or portrait with the Belkin Qode Thin Type Keyboard Case.

And when you’re done working, the iPad Air can attach to the case like a smart cover to protect the screen when not in use.

The onboard magnets can also put the iPad to sleep when it is closed and wake it up again when it is opened up again.

The onboard battery can be recharged using the included microUSB cable and, when fully charged, can stay powered by six months.

What helps this is the smart sensing technology that can automatically turn the keyboard on when the iPad Air is locked into place and off when it’s not in use.

The Belkin Qode Ultimate Keyboard Case had the same responsive keyboard as the Thin Type Case but adds a clip on cover that completely encloses the iPad Air.

It is also made from aircraft grade aluminium and still manages to be lighter than the iPad Air itself and also still thin enough to easily fit into a bag.

Once the iPad Air is clipped into the top of the Belkin Qode Ultimate Keyboard Case, it can be positioned at three different angles and held tightly in place with a magnet.

The keyboard, which connects to the iPad Air via Bluetooth, can turn itself on and off automatically and doesn’t even need an on/off switch.

When the keyboard is not being used it can be folded away to allow for more comfortable browsing with the iPad Air.

The Belkin Qode Ultimate Keyboard Case is an excellent all-round solution that provides a handy keyboard and protection for the iPad Air yet still manages to still be sleek and lightweight.