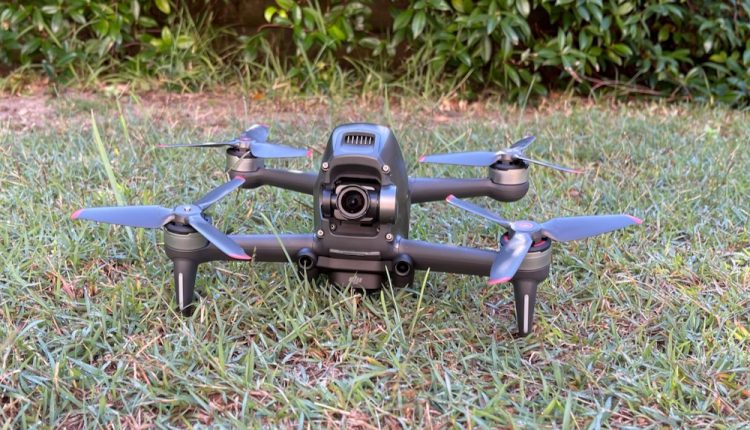 The DJI FPV is an amazing new drone that’s super-fast to produce high speed and high energy. It’s a shame that technically wearing the DJI FPV goggles is illegal according to the CASA drone laws – but that won’t stop the sheer enjoyment of flying the DJI FPV and capturing truly stunning videos.

Flying the DJI FPV drone puts you in the driver’s seat and allows users to create some stunning cinematic footage. FPV stands for “first person view” and that’s what exactly what you get.

And the DJI FPV is fast and nimble – it’s the drone version of a Formula One car.

DJI FPV comes with a controller and also a pair of goggles that allows you to see just what the drone sees in real time.

But here’s the thing – flying the DJI FPV with the included goggles is actually illegal in Australia.

The CASA (Civil Aviation Safety Authority) rules for recreational drone operators states: you must keep your drone within visual line of sight. This means always being able to see the drone with your own eyes rather than through a device, screen or goggles.

And wearing goggle prevents you from doing that.

Even if you have a spotter – the person with the controller simply cannot legally wear the goggles and fly the DJI FPV at the same time.

And if you do wear the goggles, all you see is what the drone sees and you’re not seeing the bigger picture like your surroundings and potential obstacles and dangers.

Best you do can is offer another person the option of wearing the goggles so they can enjoy the ride which can be quite fast and dizzying.

You might even make them sick if you’re really going for it with some fast moves and turns.

The alternative is what we did and that was connecting the goggles with a USB-C cable to our iPad running the DJI Fly app so we could see what the drones sees as well as keeping the drone in sight. 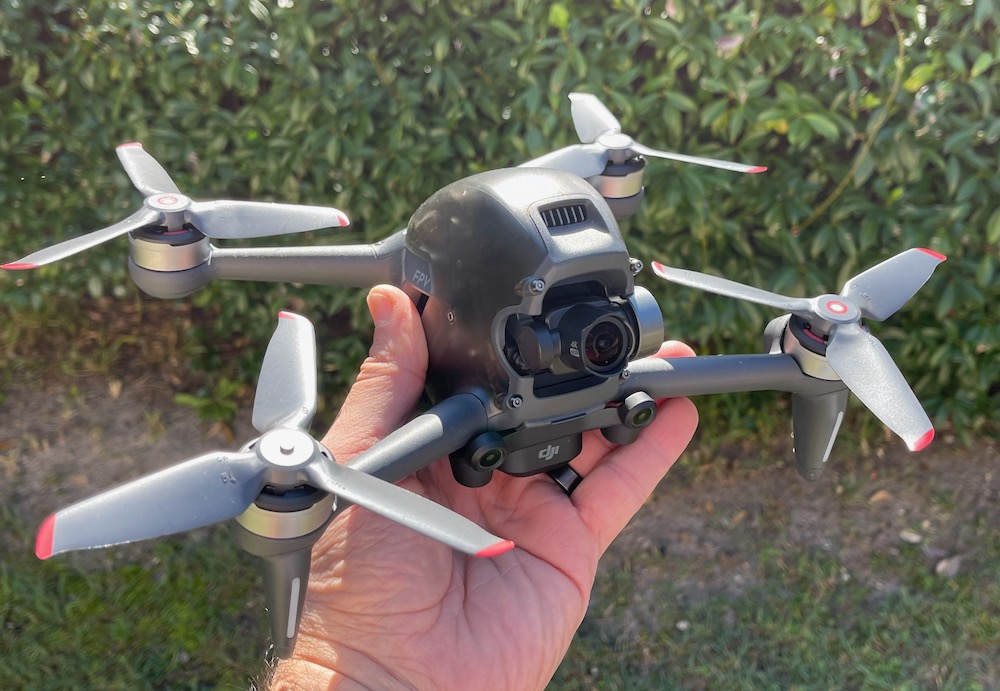 The issue we found with that was that while the camera view was excellent on the iPad, we couldn’t see the vital information like battery level, length of time we were recording and any safety warnings.

To find that out we had to stop flying the drone look into the goggles.

Most of the time we were able just keep an eye on the DJI FPV drone and make sure our path was free of obstructions and away from people and buildings.

The controller doesn’t even have a clip to attach your phone which is why we had to keep the iPad screen nearby so we could have a glance at our position. 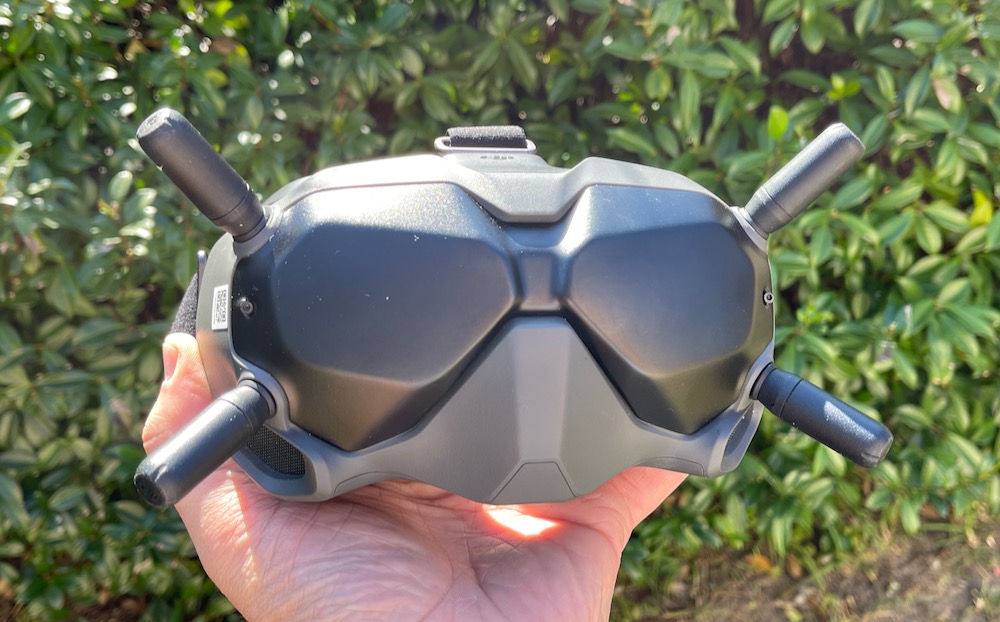 This was really liberating and responsive and something better pilots can handle. Naturally you need a very steady hand because one wrong movement can send you into a tree – which is what we did (see our YouTube video).

But no matter how you decide to control the drone, the resulting footage of is nothing short of amazing.

Design-wise the DJI FPV drone is a lot different from the company’s other drones.

For a start it has a more compact size and shorter fixed arms rather than foldable arms found on other DJI Air and Mavic drones. 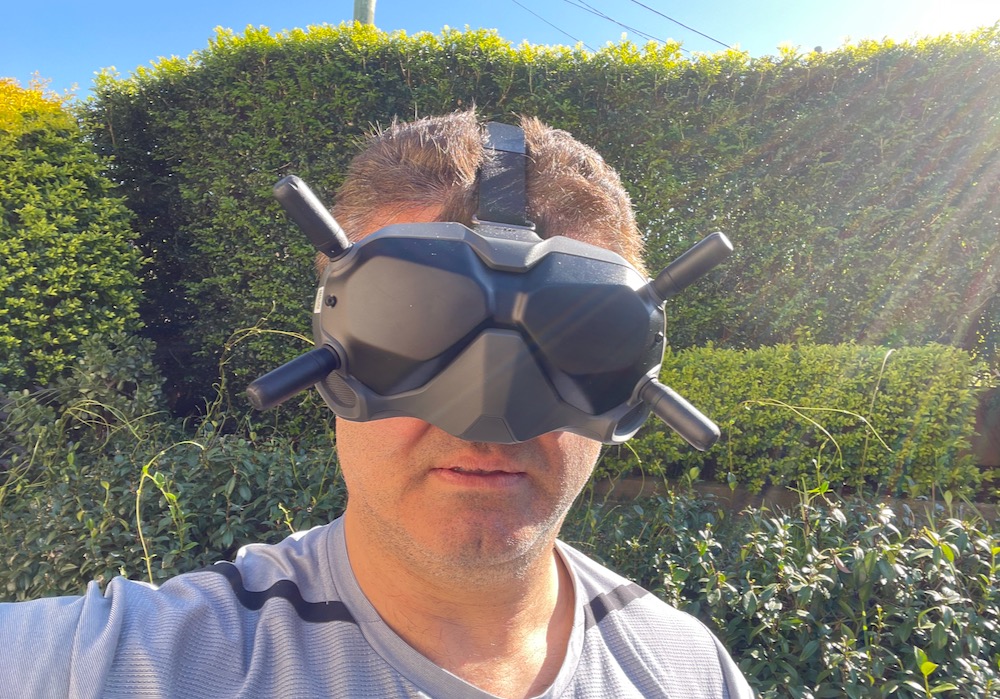 The removable battery actually forms the back landing section which is why it has a couple of nodules to provide some cushioning.

The DJI FPV is built for speed and manoeuvrability.

The camera on the DJI FPV is located in the nose of the of the aircraft with the ability to tilt it up and down on a one-axis gimbal to create that first person effect. 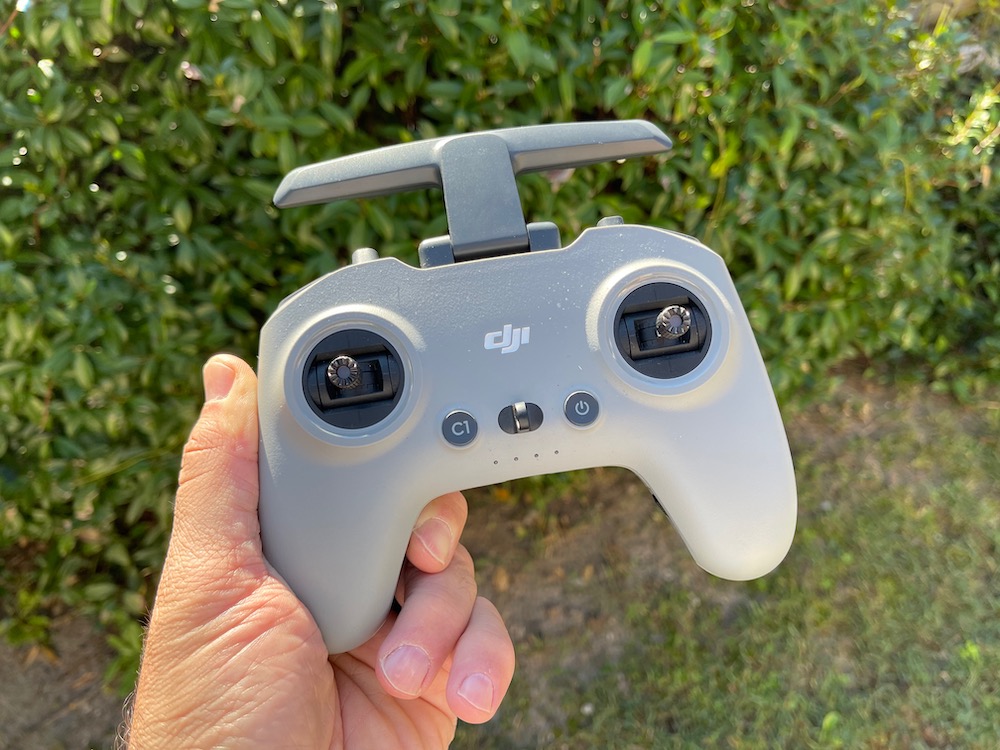 And the RockSteady EIS technology keeps your videos smooth and steady.

The onboard camera is capable of shooting 4K video at 30 frames per second and has a 150-degree field of view.

One down side of that is that you often see the props in your video.

The video quality is unmistakable – crisp and clear with great colour in glorious 4K. 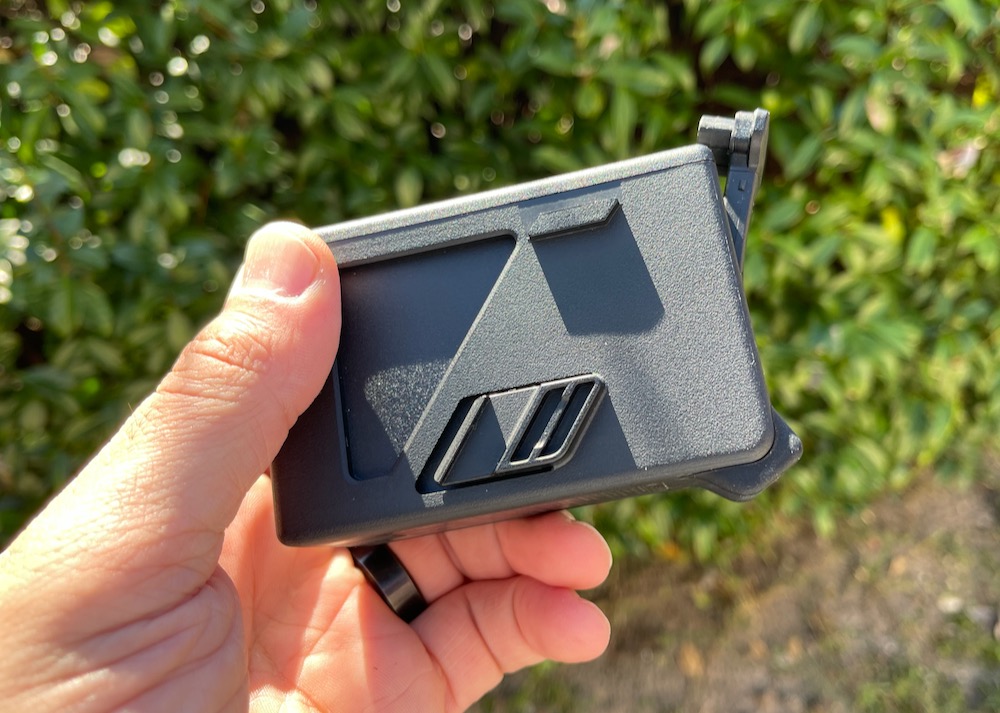 There are three different flight modes – S Mode which give you the freedom and speed but with simplified controls, M Mode which gives you the complete FPV experience and, for beginners, there’s N Mode which slows things down for less experienced pilots.

But the DJI FPV is definitely not a beginner’s drone.

To get the most out of the drone you need to be fairly skilled because it is so fast and manoeuvrable.

And how you fly the drone also determines how long the battery lasts. If you are in M Mode and going hell for leather, you’re probably only going to get about 10-12 minutes of flight time.

If you’re a lot more conservative and stick to 40km/h or slower you might get about 20 minutes of flight time. 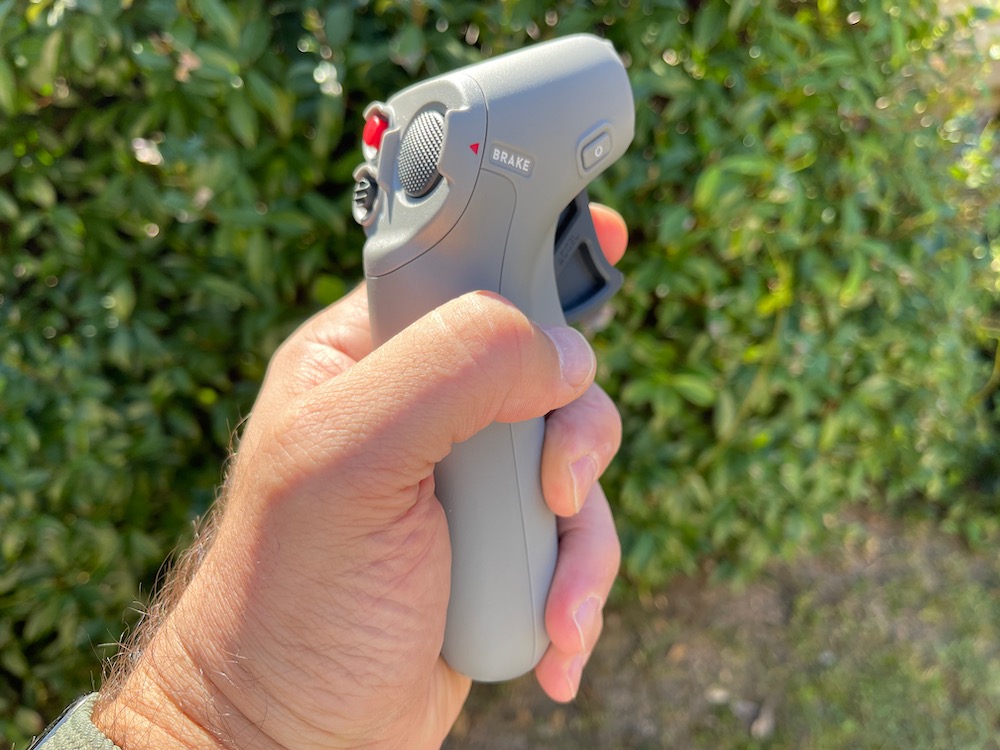 That’s why we’d recommend the DJI FPV FlyMore Kit which adds two extra batteries for a total of three and a charging hub.

The DJI FPV is an amazing new drone that’s super-fast to produce high speed and high energy. It’s a shame that technically wearing the DJI FPV goggles is illegal according to the CASA drone laws – but that won’t stop the sheer enjoyment of flying the DJI FPV and capturing truly stunning videos.

What are Bitcoin Cash and Bitcoin Gold?