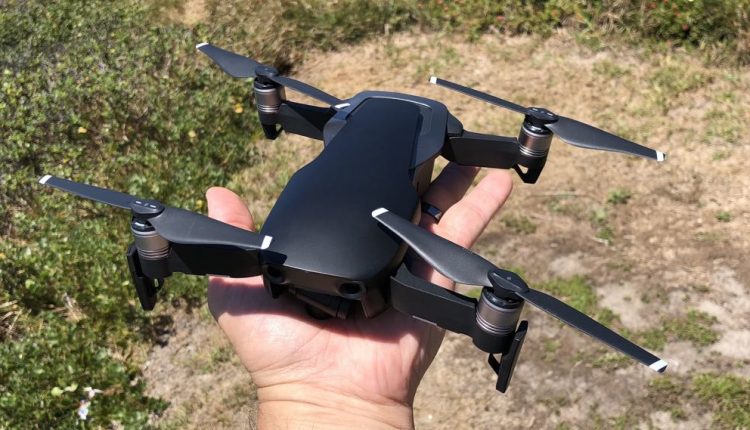 When DJI releases a new drone it’s a big deal. And the Mavic Air is no different. But it’s not that big. The foldable drone is actually surprisingly small but it can still shoot incredible video and capture incredible stills like its big brothers.

The Mavic Air packs a lot into its small body which, when completely folded down, is no bigger than a smartphone.

And it fits inside a case not much bigger than the one you use to store your sunglasses.

It’s smaller and lighter than the Mavic Pro and yet still includes a 3-axis gimbal, a remarkable camera capable of 4K video and collision avoidance sensors.

When you see the Mavic Air for the first time, you’ll be surprised at how small it is.

It literally fits in the palm of your hand. It’s been designed for you to take it anywhere with you whether it’s a trip to the beach or a trip to the other side of the world. 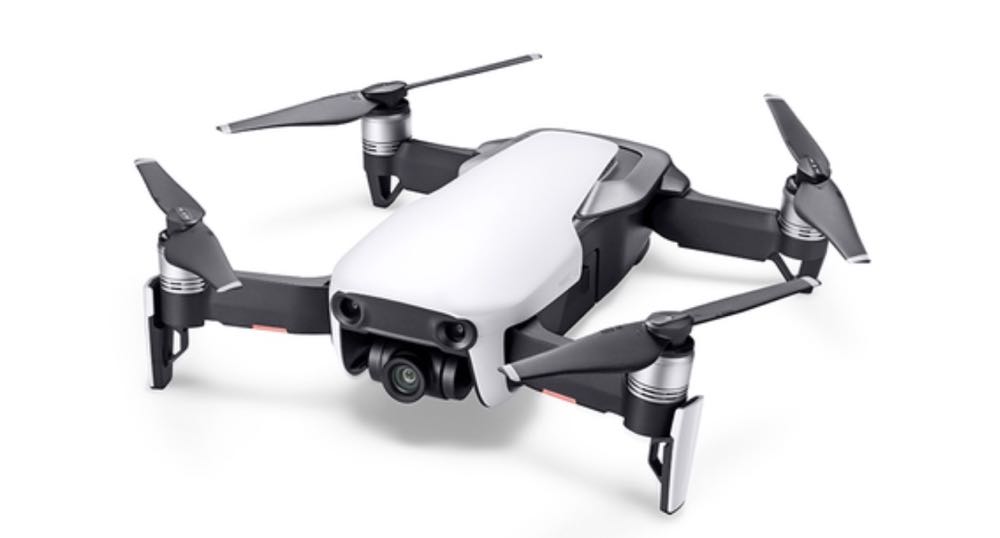 It’s four arms unfold elegantly when it’s time to fly with the propellers already attached and ready to go.

The included controller is similar to the one included with the Mavic Pro and allows users to connect their smartphone or small tablet to run the DJI app.
And like the drone itself, the controller is super small and folds down to a compact size. 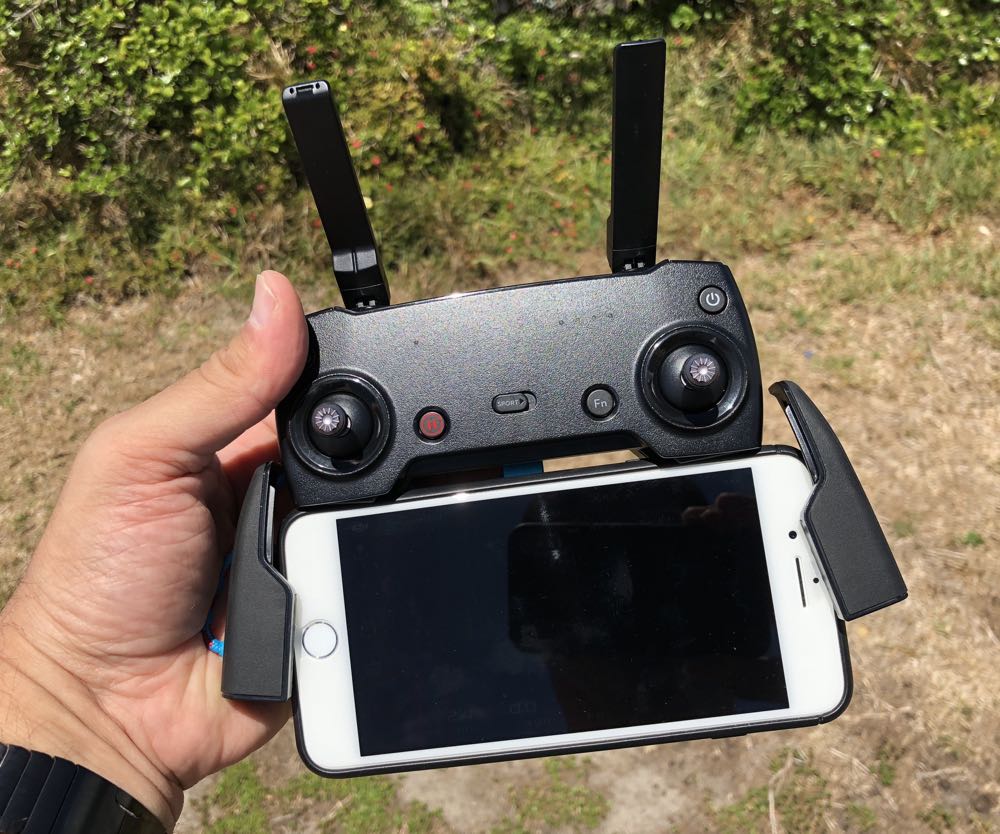 One thing we liked was the ability to unscrew and remove the joysticks so the controller can be stored in an even smaller space when not in use.

The controller has shortcuts to instantly snap images and shoot video and a dial to adjust the angle of the camera in flight. 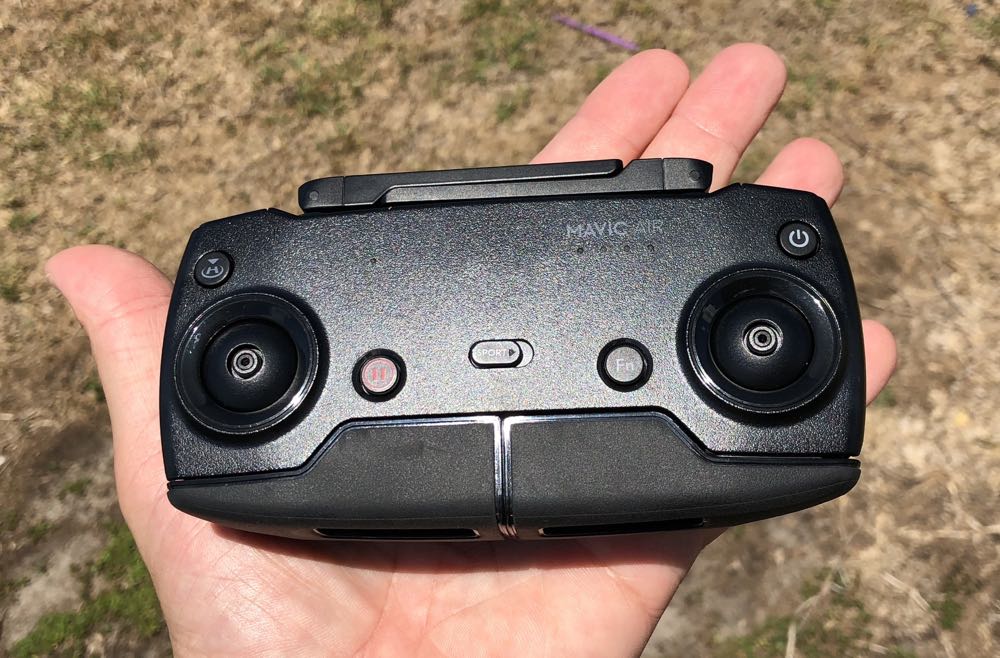 Connecting to the drone is not an issue thanks to its new wi-fi video transmission system, located in the foldable landing gear on the front props, which supports dual frequency bands of 2.4 and 5.8GHz.

What’s really impressive about the DJI Mavic Air is the 3-axis gimbal and camera which can shoot 4K video at up to 30 frames per second, 2.7K at up to 60fps and full high definition after 120fps.

You can also capture 12 megapixel stills, bursts of three, five or seven frames at a time. 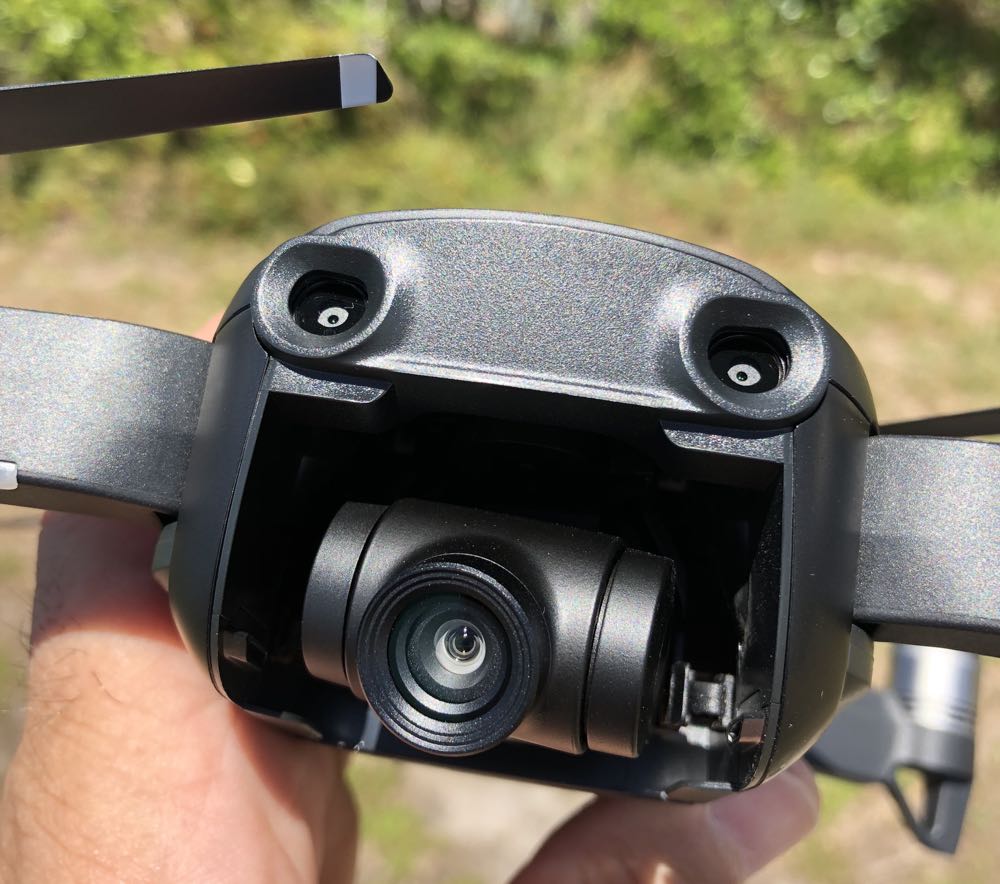 The video and image quality is undeniable. It’s hard to believe these results are coming from a device so small.

It also takes the shakes out of your still images which are also stunning.

One of the biggest appeals of the Mavic Air is that you don’t need to be a pro to fly it.

Yes, you can control it manually with the remote but is also possible to control the drone with gestures.

What pleasantly surprised us about this was how responsive the device was to our hand gestures. 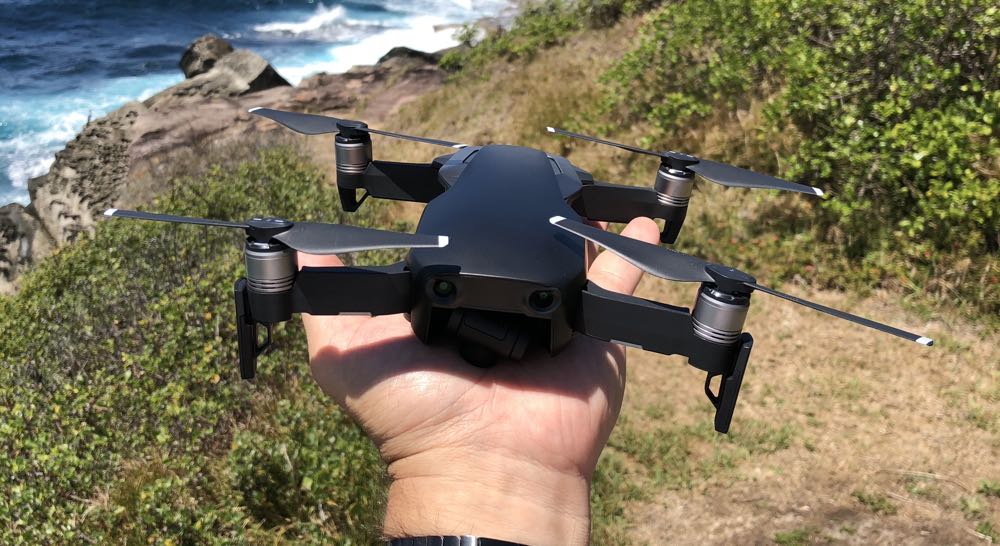 A single out held palm allows the Mavic Air to lock on to the user who can then wave their arm left and right to move the drone in the air.

Holding out two open palms and moving them apart sends the drone further away from you while bringing your open palms closer together drags it towards you like it’s on a string.

In this mode, making the peace sign will trigger selfie mode. You will see the blinking lights which act like a countdown for your shot.

You also don’t need to be a pro to capture amazing videos thanks to the incredible QuickShots. There are six QuickShots that can capture your surroundings in remarkable fashion.

They include Rocket (a straight up shot of yourself), Dronie (a video of yourself as the drone pulls up and away), Orbit, Helix, Asteroid and Boomerang (which shoot the subject as the drone circles at various heights and angles).

The resulting videos are quite dramatic and powerful and can really show off your location in a unique way.

And they were so easy to do – it was just a matter of choosing the subject (in this case yourself) and tapping on the circle which initiates a countdown for the shot to begin.

The Mavic Air can also track moving objects. Select your subject or subjects and it will lock on and follow them either from in front, from behind or from the side.

It would be possible to track yourself while you’re running or cycling or moving any other way in any particular direction.

Users can also get creative with their shots and create 32-megapixel sphere panoramas.

To achieve this the Mavic Air stitches 25 images together in just eight seconds.

This is in addition to the horizontal, vertical and 180-degree panoramas.

And to enjoy a truly immersive effect, they can be viewed on the DJI Goggles.

DJI says the Mavic Air has a flight time of up to 21 minutes. This is certainly true if the pilot flies the drone until the the battery is absolutely exhausted.

We were taught to activate the low battery warning when the battery level hits 25 per cent.

This is a good buffer especially if you’re out flying over water or with the drone a long distance away. 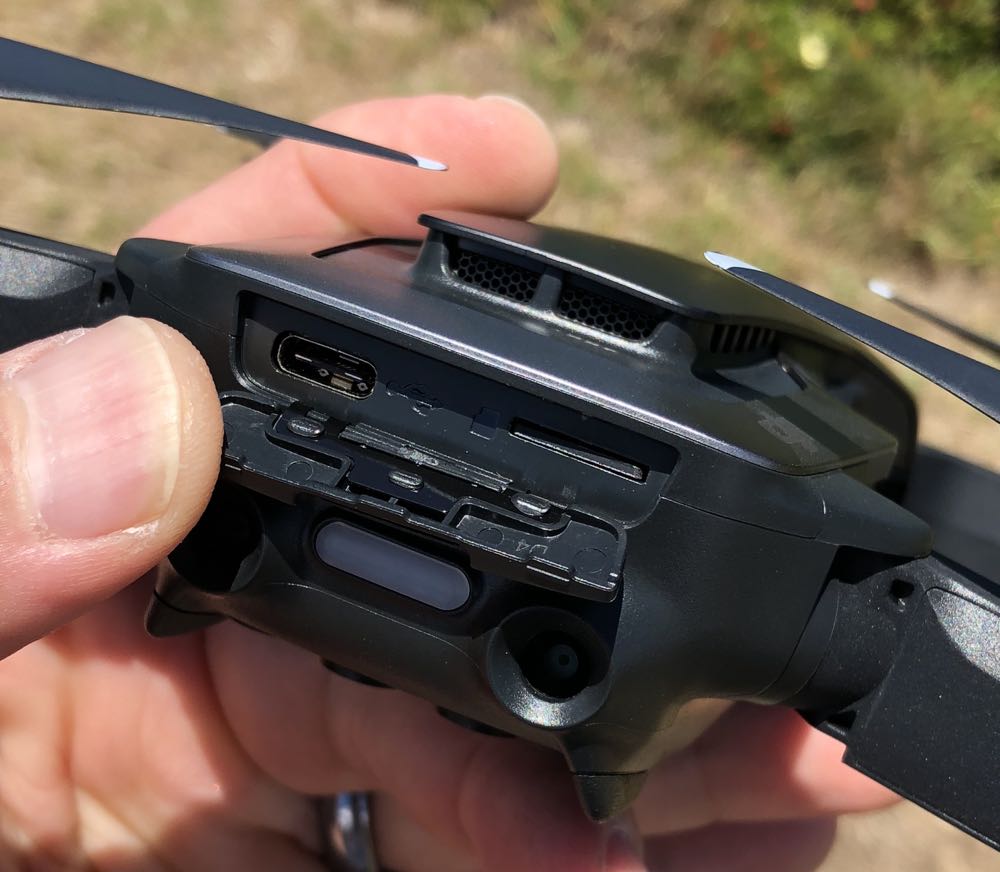 Setting these parameters means there’s plenty of juice left in the battery to bring it back to you and landed safely.

With our 25 per cent battery setting, we were averaging about 15 minutes per charge.

If there was no immediate danger, we were able to fly the drone till there was about 5 per cent on the battery which took that flight time out to about 19 minutes. 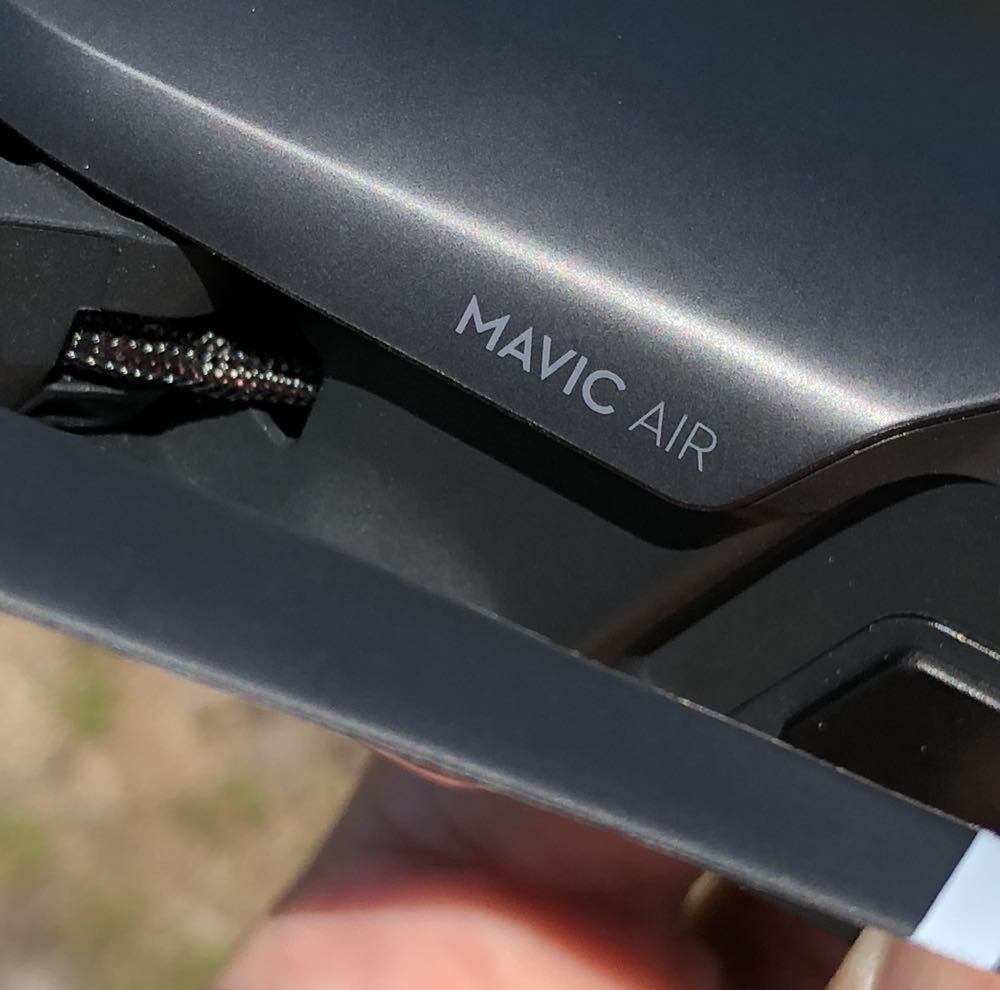 That’s actually not a bad result – you can get plenty of images and videos in 15 minutes.

And, of course, you could always carry spare batteries.

The DJI Mavic Air has 8GB of internal memory which can be used to supplement the microSD card storage.

This extra space to store your images and videos can really come in handy.

The DJI Mavic Air is not exactly cheap but for the price you are getting a quality drone that is really easy to fly and easy to capture great videos and images without too much expertise. 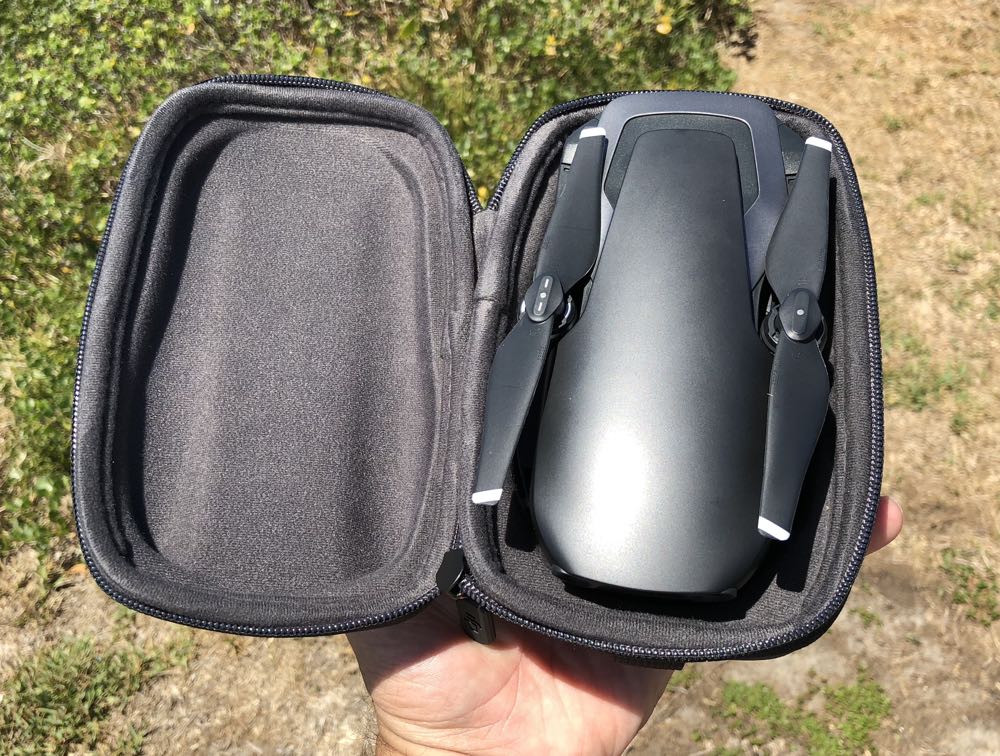 It starts at $1,299 which includes the controller, a case, all the cables you’ll need to connect a smart phone or tablet, propeller guards and two sets of propellers. If you move up to the Mavic Air Fly More Combo for $1,599 you’ll have three batteries, three sets of propellers, a case and a travel bag.

The Mavic Air is also available in three colours – black, white and red. 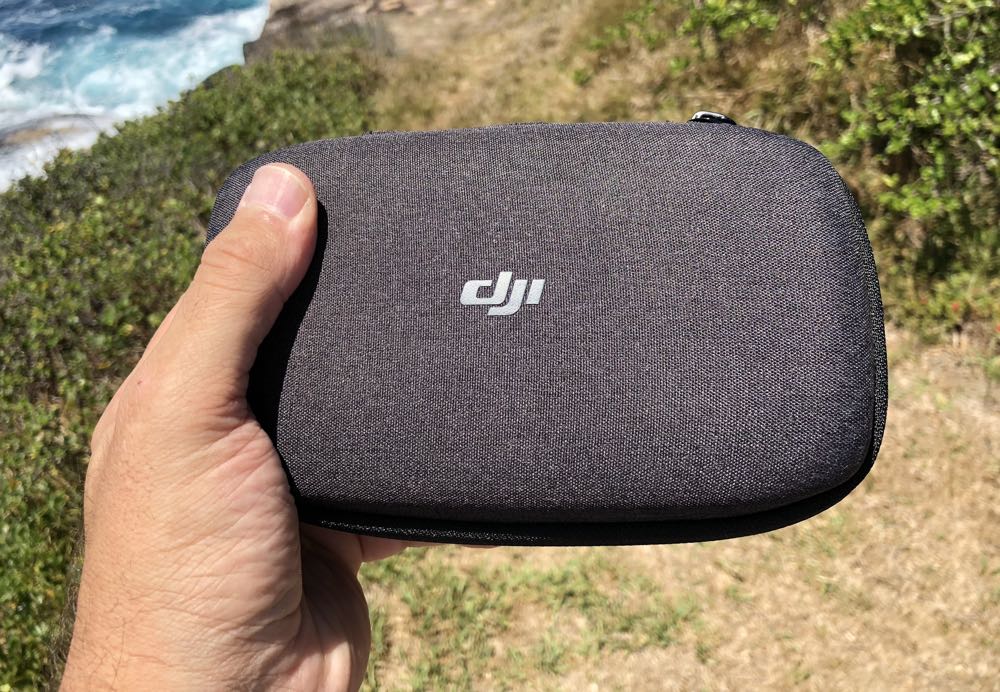 The DJI Mavic Air is an excellent drone that produces stunning results. It also has an amazing design that means it can fold down to the size of a smartphone so there’s really no excuse to not  take it everywhere with you.

VERDICT: The DJI Mavic Air is an excellent drone that produces stunning results. It also has an amazing design that means it can fold down to the size of a smartphone so there’s really no excuse to not take it everywhere with you.