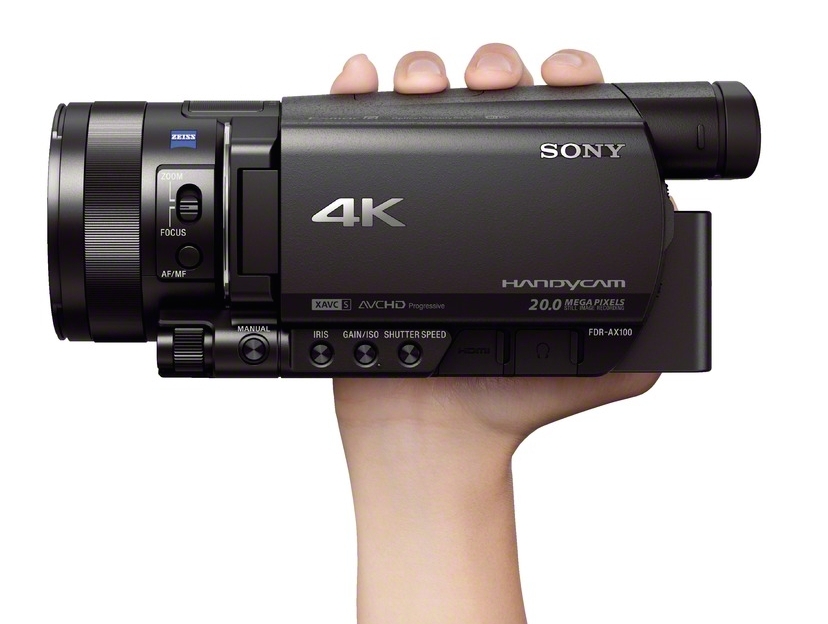 If you already own a 4K television you already know there’s not a lot of 4K content around but Sony’s new HandyCam lets you create your own.

The Sony FDR-AX100E allows users to capture their memories at the highest resolution and enjoy it in all its glory on a 4K or ultra high definition TV.

This latest device is not Sony’s first 4K Handycam, but is certainly its smallest.

It is actually a quarter the size of the FDR-AX1E and can be easily operated with one hand.

Onboard the FDR- AX100E is the 1.0-Type back-illuminated Exmor R CMOS sensor to deliver impressive 4K image quality even in low light.

It is far larger than the sensors found in other consumer camcorders to allow it to capture four times the detail of full HD at a resolution of 3840 x 2140.

And this is paired with the BIONZ X image processing engine which does the heavy lifting when it comes to reducing image noise and maintaining the detail in the picture.

The FDR-AX100E also uses a new ZEISS Vario-Sonnar T lens with 12x optical zoom which has been specially fine-tuned for 4K shooting.

Optical SteadyShot takes the shakes out of your shoots for smoother video.

Users can also enjoy a Sony 4K Handycam first with dual video recording – one in 4K quality and another in smaller MP4 format which is easier to share.

And with NFC (near field communication) onboard it can be simply a matter of touching your compatible smartphone or tablet to the camcorder to wirelessly transfer your video.

The device also has built-in Wi-Fi for another video transfer option as well as allowing your smartphone or tablet to be used as a remote control.

Also onboard is the ability to capture video at 120fps (frames per second) at a resolution of 1280 x 720 which can be played back in regular speed in smooth slow motion.

To playback the 4K video on your 4K TV simply connect a HDMI cable from the camcorder to your television. Users can also connect to full HD TVs and watch their video in high quality 2K (full HD).

The Sony FDR-AX100E 4K Handycam will be available later this month will be priced at $2,499.