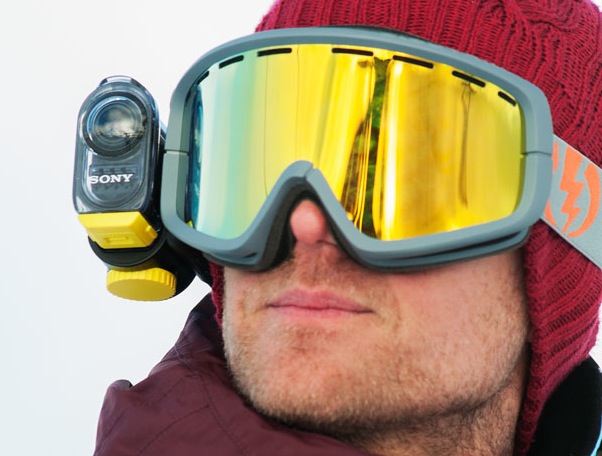 With an unforgettable name like “Action Cam” it’s not hard to imagine what the latest camera from Sony is designed to be used for.

No it’s not for family portraits and taking a picture of a meal in a fancy restaurant – it’s a wearable point of view camera designed to go wherever you go in the great outdoors.

Whether you’re surfing a wave, swimming, snorkelling, skiing the slopes, riding your bike, riding a skateboard, paddling a kayak or climbing a mountain, the Sony Action Cam can be right there with you to capture images and record full high definition video of your exploits.

This area of photography has been mainly the domain of products like the Go Pro and the Contour series of cameras but Sony has decided to put its sizeable hat in the ring to capture some of this growing adventure market.

The Sony Action Cam is quite small – it easily fits in the palm of your hand – and only weighs 65g.

But the device isn’t designed to fit in the palm of your hand – it’s meant to be strapped to our head or our body.

And thanks to this small size it means you’re not going to be lugging around a massive camera which would only be cumbersome and get in the way of the activity you’re trying enjoy and capture.

There is a large start/stop button on the back plus two navigation keys on the side beside a small LCD display which displays the camera’s status, mode and recording time remaining.

On the bottom is a removable flap which reveals a microphone, microUSB and HDMI out port to view your videos on a high definition TV.

The rear panel with the start/stop button also slides open to reveal a microSD card slot and the rechargeable battery compartment.

Also included with the Sony Action Cam is a waterproof housing that seals the camera off completely to allow users to take into the surf and underwater up to an impressive 60m.

The device also comes with some mounting pads and clips to make it easier to attach to helmets and other objects.

The Sony Action Cam is capable of capturing good quality full high definition video through the device’s 170 degree lens. That’s quite a wide angle so it captures a very wide angle of what’s in front of you.

And being an outdoors camera that’s likely to be shooting some fast and often bumpy action, a welcome feature is the image stabilisation in the Action Mode.

Another handy feature of the Sony Action Cam is wi-fi connectivity which allows the user to control the device with an Android or iPhone app called PlayMemories as well as transfer content and even use the smartphone as a viewfinder.

A direct wireless link can be created between the smartphone and the Sony Action Cam with the supplied password that comes with the instructions.

The Sony Action Cam is neck and neck in most areas of operation with rival products like the Go Pro and the Contour devices.

But where the Sony device falls down is the fact the image or lens can’t be rotated while you’re shooting.

For example if you decided to lay the device sideways to shoot something – the device doesn’t have an internal accelerometer to still shoot the right way up like you find with smartphones for example.

This is quite disappointing because the video would have to be adjusted using video editing software to put it the right way up.

Full high definition videos looked impressive with crisp and respectable colour reproduction that looked decent even when displayed on a large screen TV.

The Sony Action Cam can also take still images in interval mode rather than one at a time like a normal digital camera.

Still image quality is average and lacks the polish seen with the video quality.

The waterproof housing also proves to be a great help – but also a great hindrance.

For a start, it works well to keep the device dry buy once inside that water tight chamber there’s no access to the settings – just the ability to start and stop recording.

Doing things like connecting an external mic can only be done when the waterproof housing has been removed because the jack is on the bottom of the camera under a flap.

And using your smartphone to control the device and use it as a viewfinder can only be done when the camera is out of the water and kept fairly static. The app’s best use is to transfer the video off the camera.

The Sony Action Cam has a few areas which can be improved but still manages to hold its own in capturing exciting point of view and on-the-spot videos.

And while it’s not quite the equal of established products like the Go Pro it is certainly a respectable first attempt at a camera of this kind.

The top rating Tech Guide podcast is back with episode 23