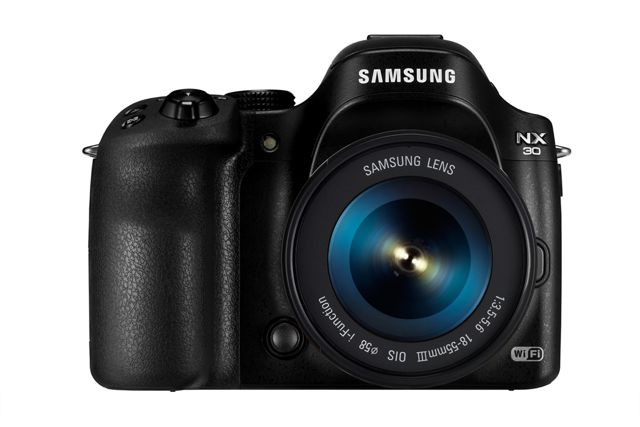 This review of Samsung’s NX30 has been some time in the making. It would have been written a lot quicker had I not been so conflicted about this camera.

See, I have a love/hate relationship with it.

However, I’ve always been of the view that whenever you’re in a position to choose a camera with a larger sensor, then do so.

The APS-C sensor in the NX30 supports this view. In general comparisons between images from Four Thirds and APS-C sensors, the latter tends to edge out the former, especially if you shoot for prints.

That the NX30 manages to fit an APS-C sensor into a form factor that competes for ease of handling with other DSLM cameras lifts it into high regard.

Feature-wise, the NX30 carries all the bells and whistles you expect in a camera of this class but there are two that stand out.

The first of these is the ability to split the touch focus point on the rear display into a touch exposure point. This gives the NX30 what I believe to be a unique feature, so it bears explanation.

You are probably familiar with touch focus, in which you tap a point on the touchscreen to specify the focus target.

Now, with the NX30, if you touch and hold that focus point, you create another target area that specifies which part of the image you want properly exposed. You drag the exposure selection marquee to the point you want exposed properly and you’ve got your shot. Genius move, that. Well done, Samsung.

For a while now, the touch focus feature has redefined how people use a camera’s focusing. Now, Samsung gives users the ability to think: “I want this point in focus and this part of the image to be exposed properly” and define both areas with a touchscreen adjustment.

I’d be very surprised if other makers don’t follow suit.

So on those two features alone, the APS-C sensor and the focus/exposure touch controls, the NX30 manages to differentiate itself from the DSLM horde competing for shelf space at your nearest camera store.

What else impressed? Image quality rates highly, of course, and the NX30 doesn’t disappoint in this regard.

Of particular interest during testing was long exposure results, with exposures of 30 seconds not generating any visually discernible noise, with long exposure noise reduction set to minimum.

Actually, the shots I did of some rusted farm machinery were quite beautiful with a B/W conversion and I look forward to seeing A3 prints from them.

One other feature I really liked was the ability to quickly switch into an auto-bracketing mode using the selector mounted on the top panel. There are plenty of situations in which making exposure decisions on the fly is challenging, so being able to easily slip into bracketing mode is welcome.

When you combine face recognition, touch AF and touch exposure plus the auto-exposure lock (perfectly positioned on the rear panel) and an easily selectable bracketing mode, you really shouldn’t be fluffing your photo opportunities and without bothering with that silly old-fashioned understanding of exposure values.

The wi-fi feature is very good. I first experienced Samsung’s wi-fi implementation with the NX300. I’m not sure anything has changed but that’s OK because it worked fine then and works fine now, bar the occasional issue with device pairing but that seems endemic to wi-fi gadgetry so I can’t single out the NX30 as any worse than other devices in this regard.

Throw in an impressive dynamic range plus a wealth of menu-based setting options such as an intervalometer, the ability to modify the OLED display’s colour profile to better match the reality of the capture, focus peaking (which I’m appreciating increasingly as my eyes age), pretty good high ISO performance (but not great) and NFC capability, you have a fine shooter in your hands.

It’s worth pointing out the NX30’s CMOS sensor is very kind to skin tones. If you’re looking for a camera to record the family history, the NX30 will treat you well.

Oh, and I really like that when you power it on, the NX30 can automatically display all your current capture settings, so you know where you’re at and whether you should make some setting changes.

Also, that the EVF pulls out and tilts up for top-down viewing.

So what’s my beef with the NX30? It ticks plenty of boxes, no doubt, yet two usability issues drove me nutty.

The first of these is the sensor on the electronic viewfinder, which is designed to turn the display off as you bring your eye to it.

It’s too sensitive, and as I’ve spent 30 years holding a camera with my left hand and managing controls with my right hand, I find myself constantly reaching across that EVF sensor leading to inadvertently disabling the rear display.

Also, when switching to holding the camera at waist-level, the same problem comes into play if you hold the camera too close to your body.

The solution is to enter the “Display Select” menu and choose the Main Display option, which disables the EVF and its proximity sensor. I’d prefer to be able to adjust the sensitivity of that sensor.

The other solution is to train yourself to use both hands to manage the NX30’s controls, much like you might use two thumbs to handle a smartphone keypad.

So, you know, this issue could be more about me than the camera. However, if you are like me, an old hand with well-established habits, then you might find it just as annoying.

The other usability issue is the control buttons could do with a little more resistance in order to avoid unintended changes to settings.

For example, there’s a switch on the lens barrel for selecting auto and manual focus but it slides so easily from one setting to the other I found myself lifting the camera to shoot only to discover the AF was unintentionally disabled as a result of firming my hold on the lens barrel.

Outcome? Missing a fleeting moment. I hate that.

The rear panel controls are well laid out but are a bit cramped and, again, I found myself taking a shot with the white balance or ISO inadvertently changed due to the hair-trigger buttons.

And one last thing. The battery charge dying often took me by surprise. When shooting a timed capture (one image each 20 seconds) to test the battery, the NX30 pulled in on average 560 RAW images before losing power completely.

On the face of it, that’s not bad, except when you’re working with the OLED display all the time you’ll capture a lot less images before the battery dies.

Also, it seems like the last 20 per cent of battery life runs down very fast, so don’t go thinking there may be another 100 shots left. There won’t be.

On the other hand, I shot about 1200 JPEGs when testing the burst mode (shooting with the EVF) so the battery duration will depend a lot on your shooting methods.

That said, the NX30 really has a lot going for it. The only users who might be disappointed are, I expect, those who like me who have some well entrenched habits with a bit of ham-fisted handling to boot and practice trigger-happy shooting styles to wear the NX30’s battery down surprisingly quickly.

I look forward to see where Samsung takes this camera line and expect the next iteration will get this model’s minor usability issues ironed out but don’t let my subjective criticisms of it dissuade you. The NX30 is definitely worth a look.